Unmitigated Disasters - or How I Nearly Won An Oscar

I just to start by saying that when I was at university, I took a course in film studies. I watched films with A Message, with Symbolism. With subtitles. And sometimes all three at once! And not only did I do well in the course, I was actually top of the class. So be gentle when you judge me.
My little cinematic treat is a nice disaster film. The more preposterous the better. And I've amassed a rather impressive collection of disaster movies - and what is more impressive is the fact that I have not paid more than €4 for a single one! (Although, on second thoughts, that mightn't be very impressive at all.) If you ever wanted to pop over to the Gingerbread House for an evening of movies-slash-crafting, you could practically choose your catastrophe and I'd not only have a film about it, but could offer you a couple of disasters you've never even considered. Yes, sirree: forget your standard run-of-the-mill disasters like tornadoes, floods and volcanic explosions, I can also offer you films about global warming-induced climate change, unwieldy asteroids entering the earth's atmosphere, alien invasions, zombie viruses, abandoned ships inhabited by bloodthirsty demons and - my favourite - genetically-altered mutant super sharks that not only possess razor-sharp analytical skills but also the ability to open doors! 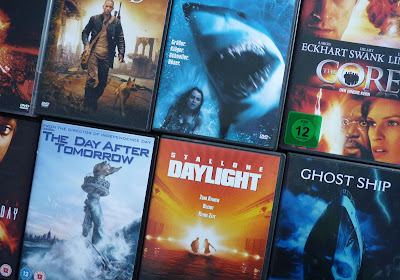 As you know, I've already had a go at writing romance novels, but for a long time I also toyed with the idea of becoming a screenwriter. Using my excellent diagnostic skills - not unlike those of a mutant super-shark - I had compiled a list of surprising similarities that these movies share. Voilà! (or as I'm seeing on a frighteningly regular basis in cyberspace: Waalaah!)
But that's not all - you need a bevvy of sidekicks! A good Hollywood film has at least half-a-dozen of these and they get picked off, one by one, during the course of the film. I'll just give you the four most important. You can add more yourself as you please.
Then you just need a disaster. That's where I'm stumped. I'm normally a creative person, but this one has really slowed me down. I can't think of a disaster that hasn't already been covered. I thought I was on to something good last year when I remembered that what scares people most is not aliens, zombie viruses, asteroids or super volcanoes. It's not tornadoes, biblical floods or - strangely enough - attacks by door-opening mutant sharks. It's actually...
... public speaking! Yes, apparently the thoughts of standing behind a microphone in front of a room full of strangers frightens the living daylights of the average Joe Soap. So I sharpened my HB pencils and grabbed a brand-new notebook and set about writing the film that would change disaster films as we know them. But I struggled, readers, I struggled. I admit, I was already desperately trying to come up with a scenario that would involve scaring the bejabbers out of the human race with the power of rhetoric, when I sadly discovered that there was a disaster film in the making that exploits that very fear - my very idea! The cheek! And to add insult to injury, last weekend I watched the Oscars and was very displeased to see that the idea they pinched from me had not only done well, but had been a cinematic triumph. Snort!
Therefore I would like to call upon all of my loyal readers to boycott the film The King's Speech because a film about the horrors of public speaking was my idea and - footstomp - I had it first. Take note, Colin Firth, you are struck off my Christmas card list!
Harsh words, but I think it's justified, don't you?
_________________________________________
One of the reasons why I've dipped into my litany of disasters is because I'm going home to Mammy and Daddy Gingerbread for a week tomorrow. As you know, we missed brother Johnny Gingerbread's wedding last year because of the darned Icelandic volcano and spent Christmas in Germany thanks to a blizzard. I'm trying to prepare myself for the next disaster - forewarned is forearmed and all that. So fingers crossed that the next post you read from me will be from the Gingerbread Homestead, on Daddy Gingerbread's new laptop in his chair by the fire: 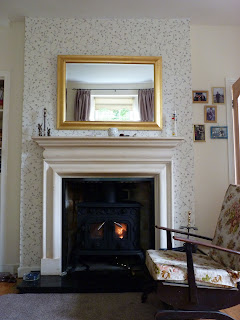 Posted by The Gingerbread Lady at 10:49 PM

I love your )appropriated) film idea! But to paraphrase Jeff Goldblum, in a film I'm sure I needn't mention:

Have a lovely, disaster-free trip! With no dinosaurs! (That was a hint.)

So you are Dan Browns ghostwriter?

As pretty much a non-disaster film viewer, you have opened my eyes to all the great possibilities of the cinematic world. How COULD I have missed all this? On the other hand, our "disaster" movies around here focus on the documentary type, involving real people, real governments, and real stupidity.

I think ours are scarier.

By the way, have a disaster free (both types) of trip! Say hello to your parents!

Given my name, I'm sure it won't come as a surprise I simply adore mutant super sharks ;)

Am I Dan Browne's ghost writer? Ridiculous. Dan - I mean, Mr Browne and I are just good friends. Honest.

Boycott Mr. Darcy, errrr, Colin Firth? Has the chill finally gotten to you?

Going to put index finger to thumb to ponder where my loyalties lie. :D