A World Without Planes

Such a strange week. Our house lies directly under a flight path between two big German airports, so normally the sky is a criss-cross of jet trails. In the past week, the skies have been silent and blue. 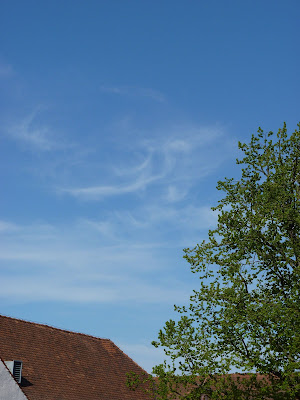 No white streaks across the sky during the day; no flashing lights at night, marking the path of an airplane across the black sky. And no noise. Not that you notice it, mind. You barely register that it's there - until there are no planes at all and it might suddenly occur to you that it seems a little bit quieter.

But yesterday evening and today we noticed the first jets scratching the clear blue sky. 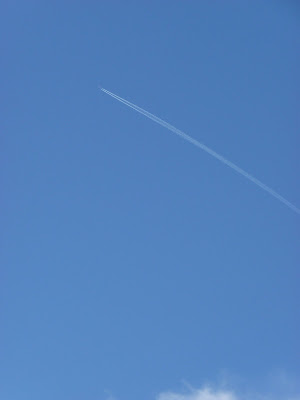 Business as usual, it seems.
Posted by The Gingerbread Lady at 5:12 PM 1 comment: 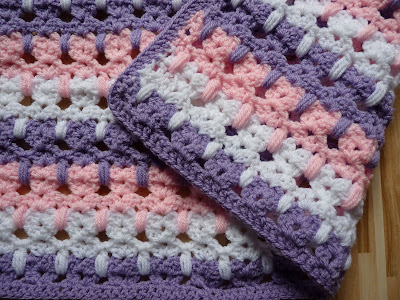 This pattern is available in several places and in several slight variations on the Internet, so I cannot claim it as my original design - the author is unknown. This is a visual tutorial for those of you who, like me, thought this pattern seemed very intimidating at first ... but I quickly discovered that it’s a piece of cake. You only need to chain and DC, and learn how to do a cluster. In the last row you'll also do SC, HDC and TR - but we'll get to that later! This pattern is quick and easy – and very cute.

A short note before you go on. The pattern is worked in five stitch repeats/a 5-stitch pattern repeat. What does this mean? Well, for a starting chain, you need 8 chain to start the row (- the stitches in italics above) and the cats are based on a pattern repeat that is worked in five chains into your starting chain (the piece from * to ** above.) To finish off, you need 5 chain (see the piece in italics above.) So your starting chain needs to be in multiples of 5 chain PLUS 8 chain (to start) and 5 chain (to finish), e.g. I start with
103 chains: 5 + 8 (beginning and end) + 90 stitches (18 x 5-stitch repeats) 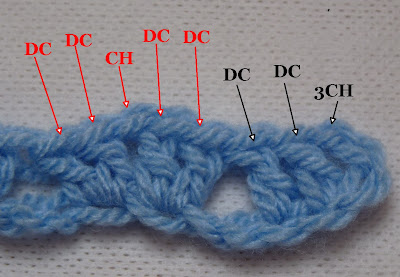 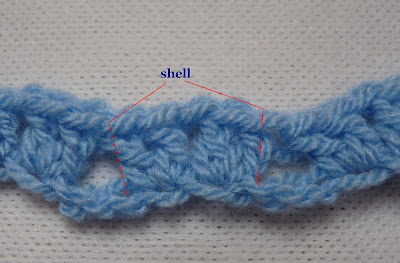 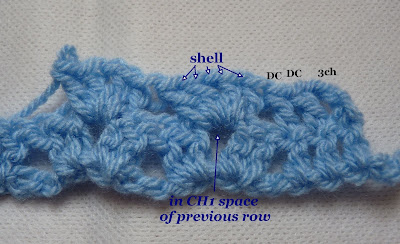 3CH, DC in next two stitches. * Cluster [=Yarn over, insert hook into the space between shells two rows below, yarn over, draw up the yarn to the working row. Do this THREE times, so you have 7 loops on your hook. Yarn over once more and draw it through the first 6 loops on the hook, yarn over again and draw through the last 2 loops on hook.]. Crochet a shell [=2DC-1CH-2DC] in chain space of shell in the previous row, crochet a cluster between this shell and the next. Repeat from * (cluster - shell - cluster ) till you reach the last three stitches, 1DC in each. 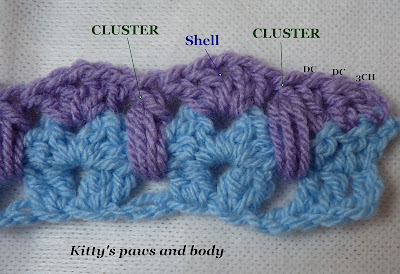 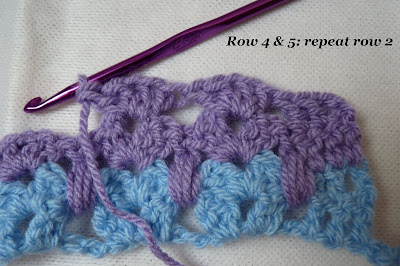 Doesn’t look much a like a cat yet, does it? Well, this is where it starts to get interesting... Change colours again and repeat rows 3, 4 and 5. Has your first pussycat appeared yet? 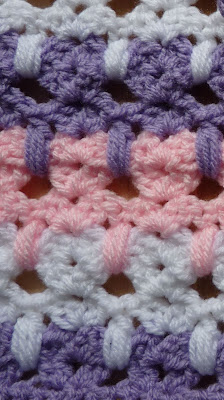 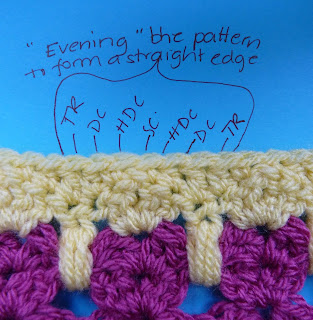 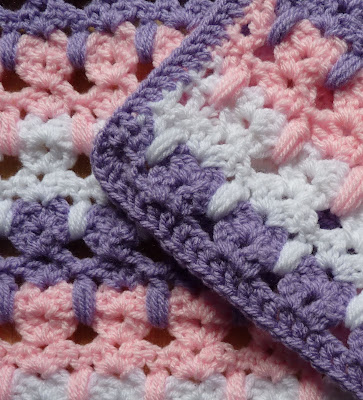 You may not reproduce this pattern in print or claim it as your work. You may not sell the pattern. Do not copy and paste pattern to another website, please use a link.


How do I make this an adult-sized blanket? How many starting chains do I need?
It's kind of a difficult question to answer because I use a lighter weight yarn than WW, so my blanket would be a little smaller than yours. When I make this blanket for babies, it's about 27 inches / 68 cms across (without the border). So one way to calculate how many starting chains you need is to measure the baby blanket you've done and use that as a basis for your calculations. In other words, if I wanted a blanket that would fit a 200 m-wide bed, I'd do three times as many starting chain as I need for a baby blanket (68 cm x 3 = about 210 cm across)

If you wanted a more precise number, I would do a little gauge test with the yarn you plan to use:
Chain 13 stitches.
Do 1 DC in the 4th chain from hook, 1 DC in each of the next 2 chain stitches. Skip two chain, 2 DC in next chain, ch1, 2DC in next chain, leave the next three chain free. (We're pretending to start the first row)

Take a ruler and measure how long the last five chain are (in the first row of a real blanket, these five chain would be the empty 3ch between shells and the 2 chain each with 2DC - these four DC form the shell - in them). Use this to calculate how wide you want the blanket.

I'm going to write up the 'Kitty Cat' pattern this weekend and, because I've nothing else planned (dramatic sob) use our new camera - which won't be used to take wedding snaps (dramatic sob) - to try and record a video tutorial (dramatic sob - oh, wait. One sob too many). 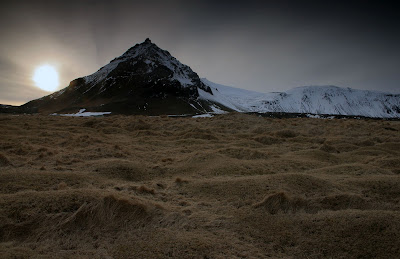 I was sitting in the school canteen, eating my rice stirfry and chatting to my colleague about our rascally students. Suddenly, the school secretary appeared at my elbow.
"Gingerbread Lady," she said solemnly, "I have some bad news. Your husband just rang to stay that your flight has been cancelled because of the volcano in Iceland."
I winked at her. "Oh, really?" I smirked. "A volcano?" Wink, wink.
You see, this morning I called into the secretaries to check that everything was okay for my day off tomorrow and they'd been envying me because of my impending trip home. They got details of the location, my Brand New Posh Dress, my Impossibly High But Incredibly Sexy shoes, etc and it was generally agreed that I was, indeed, a lucky duck. So when she turned up to tell me that our flight'd been cancelled due to this - well, let's face it - preposterous excuse, I thought she was pulling my leg.

But she wasn't
Woe is me. Or, better said, woe is us.
We're stuck fast in Gingerbread Germany. If it were to help in any way, I'd cry. Or smash something. Or scream. But unfortunately none of the afore-mentioned helps disperse volcanic ash. Luckily, we found out about it before we set off for the airport in Frankfurt, so however bad it is, it could have been much, much worse. At least tonight we'll be sleeping in our own beds and not on a plastic chair in an airport terminal.

But I'm missing the Gingerbread Brother's wedding and my little pile of Gummibears sits forlornly on the dresser, next to my Brand New Posh Dress, which is hanging in its plastic wrap on the wardrobe. The sight of them is so pathetic, I can't even bear to look.

I'm off to scoff a bar of milk chocolate and feel sorry for myself.
Posted by The Gingerbread Lady at 7:59 PM 2 comments: 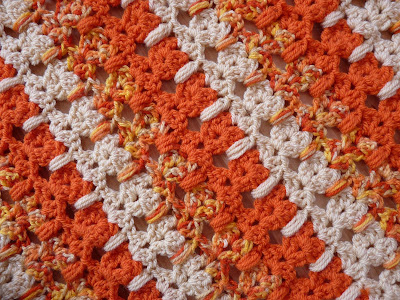 Just a quick 'hello' out to blogdom, because I'm getting ready to head home to Ireland for the marriage of the Gingerbread Brother to his betrothed. I'm in the midst of packing and already have one case full of yarn for the Gingerbread Sister. Added to the 3 or 4 kgs of yarn is another 3 or 4 kgs of German gummibears - we have not one, but two gummibear shops within a stone's throw of our house. Yes, you read that correctly: two shops devoted to the sale of gummibears and jellies. Read it and weep, my friends. I made the mistake of introducing my young, impressionable nephews to sour gummibears at Christmas: mandarine-orange flavoured jellies that have have a zesty sourness combined with tangy sweetness. Nephews quickly became insatiable jelly-addicts and now the Gingerbread Sister has added them to the top of her Bring Me From Germany... list. If I turn up without them, I might be faced with an angry pitchfork-wielding mob. Okay, I've only got three nephews and they're a bit small to wield pitchforks, not to mention the fact that I think it takes more than three to constitute a mob ... but you get the idea.

In the meantime, I've been crocheting baby blankets. No reason why, just so. The first two are 'Kitties in a Row' afghans: if you squint, you'll see the rows of kitties: 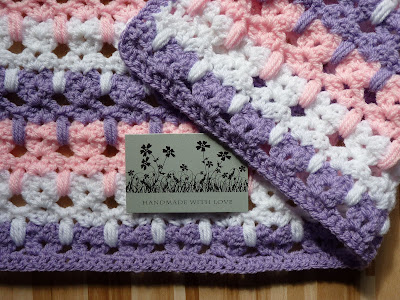 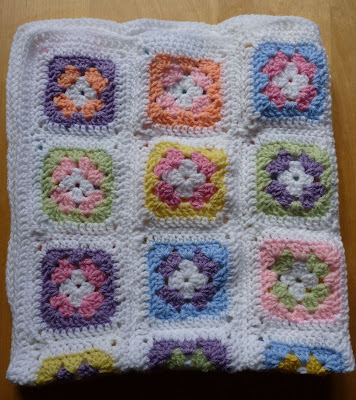 And the others were scrap blankets that started out with the purpose of using up leftover yarn, but as always, I had to buy more yarn to finish them. This is Murphy's Law of the Yarn Basket.
Posted by The Gingerbread Lady at 7:31 PM 5 comments:

We're buying a new camera. Actually, I tell a lie. I'm buying the camera and Mr Gingerbread is directing operations. Our little 3-megapixel Canon looks like a dinosaur compared to what's on the market nowadays, and I've discovered its limits because, goodness knows, I've taken a gazillion photos on every possible setting. Digital photography has set me free: no longer constrained by film, I can go nuts and snap everything in sight. Adjust settings and snap again. Adjust settings and snap again. Repeat ad infinitum or until I'm dragged away from the building, cloud or door that's caught my fancy.

Anyway, Mr G. has taken matters into his capable hands because while I take care of the artistic side of things, he looks after the technical stuff. He speaks Nerd and I don't, and this is a distinct disadvantage when buying a digital camera. Our trips to the local electronics store are like this:

Me: What about this one? Look, it's red. Isn't that cool?
Mr. G: Tsk, tsk (removes shiny red camera and replaces on shelf.)
Enter shop assistant, stage left.
S.A.: Can I help you?
Me: Yes, we're looking for a camera.
S.A.: What kind of camera did you have in mind?
Me: Well, one that takes pictures, ideally.
S.A.: Do you want one with a schnickity or a 25-blagette compluffle?
Mr. G: I don't think we'll be needing the compluffle because that's already been replaced with a zerzizzle, hasn't it?
(Shop assistant recognises a fellow Nerd speaker and from this point on, I do not exist.)
S.A.: Aha! (gleefully) But you can't underestimate the importance of the compluffle when you're taking 4-million fji pictures with a 93 million resolution! You might've had negative experiences with the 12-blaguette compluffle, but the newer models are really quite fantastic.
Mr. G: Yes, but is the blagette necessary if you're going to ollopf it in PhotoSlop? Wouldn't it be better to take the zerizzle feature and buy an external ollopficator?

At this point, I'm usually to be found in a waking coma, staring at the tripods as though entranced. After a while, Mr Gingerbread comes and picks me up, and then excitedly reports all of his newly-acquired knowledge on the long journey home. Okay, we only live five minutes from the electronics store, but it seems like a long way away when you're expected to respond to this conversation: "And then I asked him what the life-expectancy of the jilostify lens was and he said it would be far more sensible to invest in a sibaquate filter and combine that with the zerzizzle. And then I said, why don't we just go for the compluffle with the..."

At the end of the day, I just want something that will allow me to take a few pictures of the things that hold a strange fascination for me, e.g. The Sky 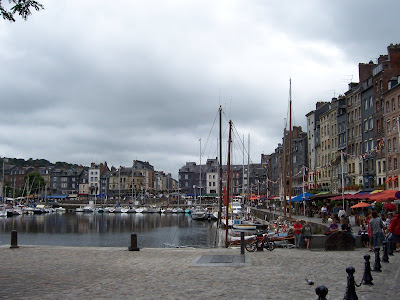 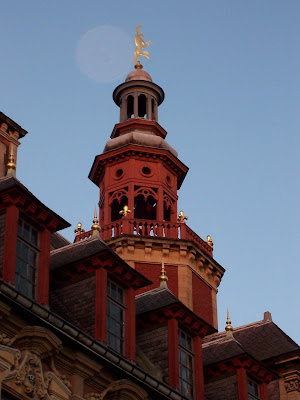 and, most of all, food. Especially cake. Had you noticed? 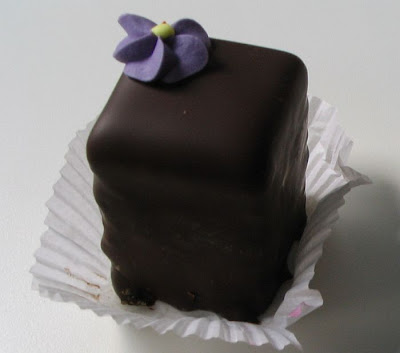 Unfortunately, I don't know how to say, "I need a camera to take photos of the sky, buildings and cake" in Nerdspeak, so I can only hope my husband has interpreted my wishes correctly and has ordered one that will allow me to take some nice snaps.

Hold your breath, readers. We'll see whether he's made the right choice very, very soon...
Posted by The Gingerbread Lady at 9:55 PM 4 comments: