You might remember this post from October, in which I wrote up the pattern for my Ribbon Afghan. 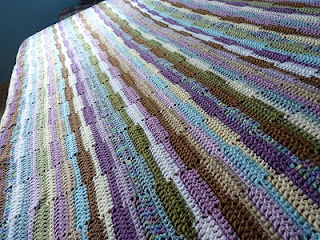 It was a pattern I kind of ... well, slid into. I had yarn, I had a hook, I did a long chain, I added a few DCs and SCs ... and it more or less just created itself. I was the one wielding the hook, it's true, but it seemed to be a self-crocheting afghan (ooooh, wouldn't that make a nice fairytale? Along the lines of the story of the magic porridge pot, but for crafters!)

In any case, the knitting/crocheting forum Ravelry has a wonderful gallery feature, which displays photos of all the projects made from a particular pattern. And, to be honest, I got a very funny feeling the first time I discovered (by accident, mind you) that other people - real people! - had made things - real things! - from my patterns. And it's even weirder when you look at photos of finished objects and realise that their version of your pattern is even nicer than your own, haha! Look at just two, for example (there are others in various stages of completion, here are two finished afghans):


So even though the original is on my sofa, I can't help but feel blanket-envy - I want one of them instead :-)
Posted by The Gingerbread Lady at 5:43 PM

Although the others are nice I love yours the best. The range of colors you used is wonderful.

Off to Ravelry to look at your blankie.

How exciting, to have others using your pattern. I think it's a lovely compliment to your design.

I must agree with Karen...you provided inspiration...something I usually need before picking up MY needles...sorry...I rarely hook, but am not prejudiced...:-)

They are pretty but so is yours! I'm envious because I don't have one! :o)

Outdone? Hardly. Theirs are different but no better than yours. And what a compliment, anyway, when your design takes on a life of its own.

There's something for you on my blog.
ps- I love that blanket. I'm totally jealous that you've inspired so many lovely blankets!

All the blankets are lovely! I'm sure so many people will enjoy snuggling up in such beautiful creations for years to come.

I do love all the blankets, but I too like your colors the best, they are so calming!

cannot get pdf from your site

I love the blanket. Thank you. But Im still stuck on the gauge portion. That's because I ALWAYS skip it.....Help!!!! please.

Hi Fusha,
You could skip the gauge - all this does is give you an idea in advance of the length of the blanket. You could just take a random number that you can divide by 10 (because you do this in groups/units of ten stitches) and see how long it turns out - 100 starting chain stitches, 150, 170, 200 ...

BUT if you want the blanket a specific length, e.g. to cover a bed or sofa, you have to work out the length in advance, otherwise your blanket might be too short or too long. This is where the gauge comes in. So you chain 12 stitches, do your first DC (tr) in the fourth chain from the hook and then do one DC (tr) in the next nine stitches. This gives you a group/unit of 10 DC (tr), which is the basis for this blanket.

As I said, you might be the type of person who likes to live dangerously and just starts by chaining a random number of stitches, but what often happens to me is that my starting chain is shorter (the chain stitches are a bit scrunched up and tighter than regular crochet stitches.) If I do a starting chain and then measure it, it might be the case that my chain is 60 inches long. But when I start crocheting into it, the chain stretches and I could end up with an 80-inch blanket that's way too long!

I hope this made some sense!

Wow!!! Thank you taking the time out to explain that in just detail. And, you got back with me so quickly. I truly appreciate that. You know how we are about our projects....lol....Thanks so much...bless you

Hello Fusha,
No problem at all! I normally like to skip the gauge (shh, I didn't tell you that) but when you're crocheting along the length, it's important to have a rough estimation, otherwise you'll be crocheting till kingdom come :-)) It's hard to work out the length of your blanket based on the chain alone (because it's so stretchy) so just taking five minutes to measure a few stitches certainly saved me hours of work later!
Best wishes and best of luck with it!

Thanks for this great pattern. Off to give it a try. Will add to Rav. Love how this turned out and goodness knows I have the scrap yarn left after my Over a Rainbow to start another.

I can't wait to start this pattern with red,teal,tan, olive,navy to make it look a little "Navajo"

I've been searching for a pattern to crochet certain colors for a more "Navajo" look. I think your pattern will work! Thank you so much for sharing it! I love the colors of a dark red, teal,dark olive, navy, purple,light and dark tans. I found a Hobby Lobby yard in I Love This Yarn called, Dakota, which has all these colors in a varigated, beautiful yarn!! I love it and it is sold out at the warehouse and will be months before I can get my order. In the meantime, I have all the colors to incorporate into this beautiful pattern. Thanks so much! I appreciate a great crochet talented person!

Oh happy day! I love this easy, self-tending type of blanket! And the inspirational color schemes are an added bonus ;) Thank you! (Goin' to the yarn store). Happy hookin' all...