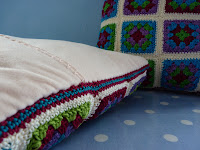 "Would you ever change your blog post?" my mother said. "I'm sick of looking at a picture of knickers with a question mark on it."
As many of you might have suspected by now, my parents believe that this blog is for them and that they ought to star in it on a more regular basis. Sadly I have to disappoint them this evening, because today we're going to talk about the one time of the year when crocheting becomes a chore: Advent.

Advent is not that much of a deal in Ireland, but it certainly is in this part of the world. Not least because the fourth Sunday before Christmas marks the traditional opening of the Christmas markets. Much of the profit made in pre-Christmas Bavaria is probably generated by shoppers buying their seasonal presents with a couple of beakers of mulled wine (Glühwein - literally, glow wine) inside and the Christmas markets are to blame/thank for that. Anyway, the opening of the markets makes me shudder because it usually coincides with an avalanche of pre-Christmas exam correction and a tsunami of crocheted gifts.

Oh, handmade gifts. Sigh.
I hate buying presents - I basically want the giftee to tell me what they want and I'll just wrap it up - but making gifts is even hairier. For example, I thought I'd give my sister-in-law some nice cushions for her dark red sofa. Her apartment has lots of wood and bright, quirky colours, so I made some nice granny square cushions in bright, quirky colours: 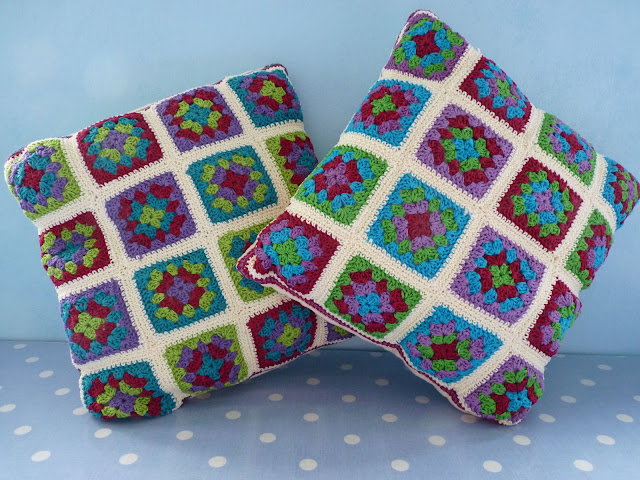 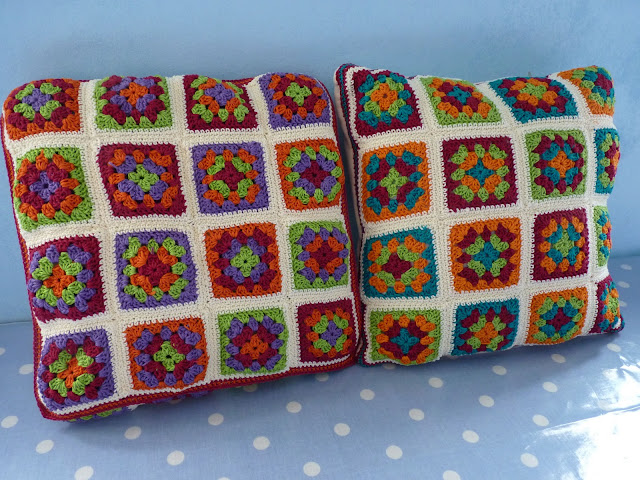 Fortunately - I say 'fortunately' now, but at the time, there was a lot of inner teeth-gnashing and fist-shaking - I showed her photos of some of my cushions the last time we met in a casual, "Oh-what-do-you-think-of-these?" way. She thought the above cushions were nice, but she thought these cushions were lovely: 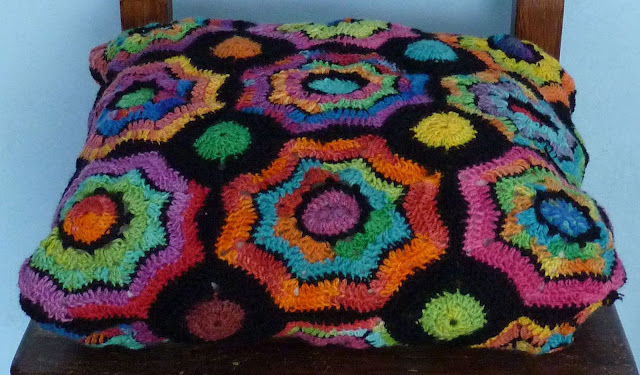 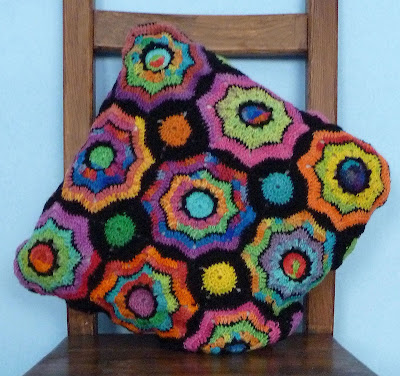 So I've gone back to the drawing board - or, in this case, the teeny-tiny hook and the super-skinny sock yarn. And I have two more of these to do by Christmas Eve.
Sob.
Posted by The Gingerbread Lady at 8:45 PM 15 comments: 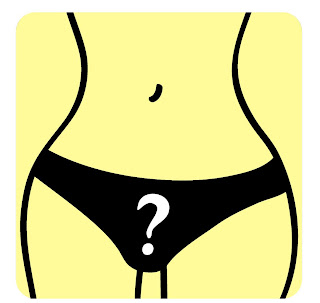 Okay, I'm being upfront about this: this is going to be a post about my undergarments. I'll have some nice crochet pictures for you tomorrow or Friday, but today I have to write about the sorry state of my bloomers.

See, I had an appointment with a dermatologist today. In fact, Mr Gingerbread and I - being rather moley creatures - decided that we ought to have someone cast an eye on our markings. It's all part of being grown-up and taking responsibility for our health. We'd been avoiding doing it for a long time, as it involves stripping down to your unders and having a strange man look at bits of your body through a magnifying glass. This, many of you might agree, seems like a scene from a modern-day version of Dante's Inferno especially designed for women. There are bits of me I would prefer that no one saw, not even from a great distance and obscured by fog, so I'm less than enthusiastic about a total stranger eyeballing them at close range. In any case, we made a joint appointment so we wouldn't be able to wuss out.
And that appointment was this evening.

As the moment of our stripping approached, I discovered with horror that my underwear drawer is a bleak and joyless place. Many of my favourite knickers are a peculiar shade of porridge: the dull grey of careless washing at high heat. They're immensely comfortable, to be sure, but not the kind of pants you'd put on to, say, seduce someone. As I was rifling through a wad of tights (that's panty hose for American readers - bilingual, c'est moi) that had joined forces like some kind of hosiery-style Gordian knot or an orgy of octopussi, I also established that none of my underwear matches. And then I remembered a girl called Mary, friend of my college roommate Neasa, who liked to remind us at regular intervals that you should never leave the house without matching underwear because if you were run over by a bus and the ER doctors had to cut your clothing off, you (and your mother - or your parents' upbringing in general) would be severely judged by the nurses and doctors present. My mind boggles.  Imagine, if you will, the conversation going on while your battered body lies motionless on a gurney:
Doctor: Good Lord! This woman is wearing washed-out white knickers and a black bra!
Nurse: That's not all, doctor! The lace of the bra is ... ripped!
Paramedic: That's how we found her at the scene. We debated whether we should just leave her to bleed out.
Doctor: No, no. We took the Hippocratic Oath. We're obliged to save her and her substandard undergarments. But, nurse, get me a Victoria's Secret catalogue in here stat!

Or maybe not. But it's a frightening prospect, nonetheless.

Anyway, after much searching, I located underwear that looked reasonably similar and of the same vintage, and along with my suitably underbepanted husband, set off to be examined. Sadly, though, this tale of underwoe was cut short with the anticlimax of discovering that Mr G had got the dates mixed up: we turned up at the doctor's office to find it in darkness. So we have to re-schedule tomorrow.

I'm definitely going shopping for underwear before the next appointment, though.
Posted by The Gingerbread Lady at 11:13 PM 12 comments: 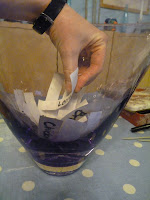 Embarrassingly late, here is the result of the Advent Sock Kit giveaway ... (excuse the shaky photos, but they were action shots: I tried to pull a name without looking and photograph it at the same time. Multitasking, how are you? Thank you to everyone who took part and congratulations to Lorraine / Loveelle! 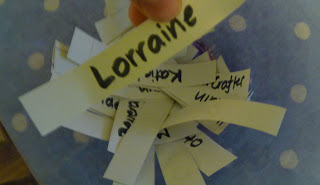 Thank you to all the nice readers who commented on my previous post. I'm glad you didn't flame me for my toddler intolerance. The thing is, I can generally forgive the children - but it's the parents I laser with my Evil Eye. I'm sure everyone who reads my blog has well-behaved little children that are a pleasure to be with. That much goes without saying.

This is the bedroom that unleashed the Ikea horror: it's a grown-up room, a civilised and tasteful room. And it's also the new home to this blanket, which travelled several thousand miles before ending up on Sherry's bed. When I see photos like this, I have a couple of seconds of decoration envy (why don't my rooms look like this?), swiftly followed by technological wonder (this blanket was in my craft room a fortnight ago and now it's on a bed in Pennsylvania and I CAN SEE IT ON MY COMPUTER SCREEN!) Awesome, eh? 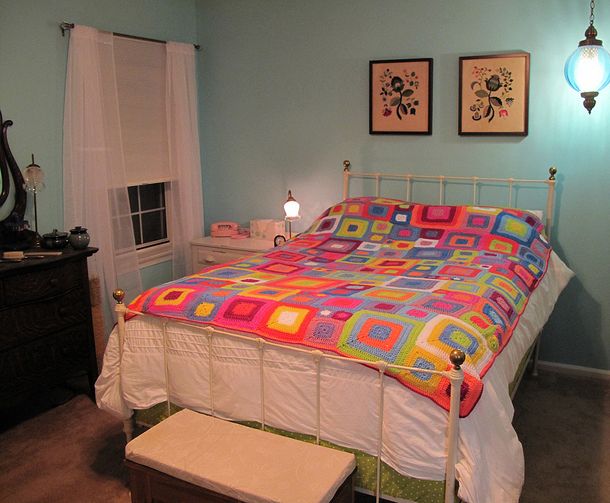 And today brought another technological wonder. I hope you don't think it's too crass of me to boast about my father again, but I think he's done something really, really clever. If you are a regular reader, you'll know that my Dad is an artist. Sadly, he does not specialise in mermaids, yarnpires or stickmen, but he paints a mean landscape. He has just printed two of his winter snowscapes as Christmas cards - and here's the really smart thing: on the back of the card there's a barcode which you can scan with your smart phone and this will direct you to a YouTube video of the picture on the Christmas card being painted (or, if you're like me with a 10-year-old Nokia phone that's essentially a large Lego brick with a mobile phone connection, you can just type in the link and look at it there). Isn't that clever? I don't know if this has been done before, but I suspect it hasn't - my father is very innovative in most creative ways. This, to my mind, is just the perfect balance of technology and creativity.

And the video for the picture below is here.

Posted by The Gingerbread Lady at 6:38 PM 13 comments: