Christmas Is About the Turnips 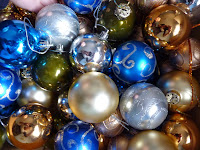 On Christmas Eve I found myself in the kitchen, looking out on the shadows in the garden in the Christmas darkness, listening to a radio documentary about church bells. My husband was chasing the baby - well, he's not a baby any more, a toddler, really - in an elaborate game that involved, amid much shrieking and Daddy Bear growls, a dash around the dining room table and a brief dart into the kitchen to circle my knees.
"Goodness me," I thought, turning the radio up so I could hear when the bells of Cologne cathedral were cast, "I'm listening to a programme about bells! I'm really getting old!"

I looked down at my hands, peeling the turnips, amidst the potato peelings and the discarded leaves of the Brussels sprouts and I suddenly saw my mother's hands. I realised that I was doing what I'd seen her do on Christmas Eve for nearly forty years, and my husband, pottering around the kitchen, not finding kitchenware that has been in the same cupboard it's always been, was just what my father always did - albeit, my father was usually attempting his one and only culinary foray of the year, his perfectly engineered sherry trifle, whereas my husband was just trying to find the teapot. Oh, and with a noisy child clambering between us.

And I started to cry, which is not a good idea with a sharp knife in your hand.
"Are you okay?" my husband, said startled. "What happened?"
"Nothing happened," I said.
"Are you sad?"
"No."
Incredulous: "Are you crying because you're happy?"
"No."
How do I explain it?
"I'm crying because we're all safe and well and content and at home. And I'm crying because I'm doing the same thing my mother did on Christmas Eve, peeling the turnips."
I blew my nose into a wad of kitchen roll and he patted me sympathetically. More like a you're-a-weirdo-but-I-love-you-anyway kind of pat.
"I'm really sorry," he said, "but I can't get emotional about vegetables."

See, Christmas isn't really about the toys and the glitz and the food and the Important Traditions we think we have to uphold, like family photos and turkey dinners and filled stockings on the mantelpiece. Christmas is about the turnips. Christmas is about finding yourself unthinkingly doing the thousand tiny things your mother did and your father did: leading a one-year-old to a little pile of toys and saying "Look what Santa brought you!", even though you know that child has no clue who Santa is. It's about wiping down sinks and countertops to wake up to a kitchen that will be clean for about ten minutes on Christmas Day. It's about lighting a candle in your window on Christmas Eve or lining up the Christmas cards just so. It's about being part of a bigger cycle, a small cog in a clockwork of Christmasses that stretch over decades. It's about the turnips. 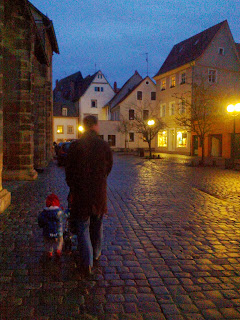 And in that sense, I hope you and yours spent a peaceful day today, doing whatever it is that you always do to keep you safe and well, and make you content.


- - - - - - - - - - - - - - - -
P.S.: This morning I opened my Christmas present from my husband, a pretty silver ring with little diamonds. I spontaneously clapped my hand to my chest and drew an intake of breath.
"Oh God," he said, alarmed, "We're not going to have a repeat of The Turnip Incident, are we?"
Dear me. I have a feeling it has already become part of family legend.

So aside from reeling in shock at the expansion of my midriff and, consequently, our family, what I have been up to, you ask?
(there seems to be an inordinate amount of commas in that opening question but I don't think I can do without them.)

Well, for a start I succumbed to fashion and started producing little owls of my own. The reason for this was peer pressure - yes, it was. A colleague saw my owl keyring and asked if I could make some for her Christmas Bazaar in aid of our local children's hospital.
Of course, I said, in a fit of benevolent do-goodery and crafting madness. I was directed to the pattern on the BunnyMummy blog by Amjaylou (-> check out her Christmas tree decorations!) and sat down with hook in hand to try to recreate them.

But here's the thing: Anna, who made mine, has clearly got the patience of a saint and the delicate fingers of an angel. She crochets these in thread - in thread, readers! -  I could barely manage cotton without using salty language. So I had no choice but to come up with a pattern of my own, cheat wildly and use sock yarn (because ... changing the yarn ... weaving in the ends ... tortured sigh.) I tried one: 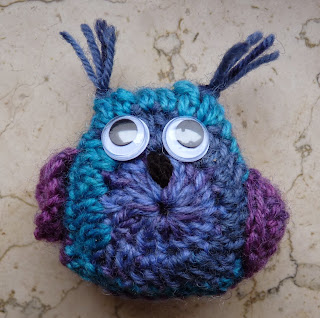 And they were a success! They sold out within an hour! People had actually placed pre-orders for them, in fact, there were requests for more. Owls certainly rule the roost this year.

If the light allows for photos, I'll write up the pattern in the coming days and you can try your hand at them, too. 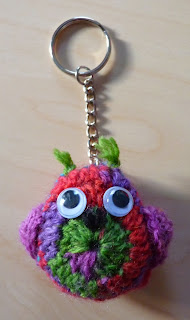 Posted by The Gingerbread Lady at 8:00 PM 6 comments: 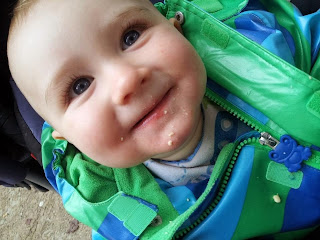 There are a lot of myths surrounding motherhood. Women have babies and some of them are wont to say things like, "It changed my life." Well, it changed mine, too. "It fulfilled me," or "Having a baby made me realise what my purpose was". Or "having a child finally defined me as a woman." Or some such statements that must fall somewhere along the line between 'bewildering' and 'hurtful' for anyone who has not had a child.


I can't really relate to any of those. I was perfectly fulfilled pre-baby, thankyouverymuch. I had lots of purpose and I didn't need a baby to become a woman. I was nearly 38 when my first was born and I'd certainly enjoyed my life up till then. I'm just not the type of woman who describes herself as A Mother, as in:
Gingerbread Lady - who are you?
Why, thank you for asking. I'm the Gingerbread Lady. I'm a Mother, a crafter, a teacher, a learner and a ... oh, goodness, I've already run out of inspirational titles.

My son was born with A Personality (jazz hands). He came into this world as his own person. He joined our family and it felt like we had suddenly got a new flatmate, a third person in our house, a little tyrant that dictated how everything should be and made his feelings known when he was displeased. He was not a passive little being upon which we could project our hopes and aspirations. John was John from the minute he was born and I am his mother. I love being his mother but have no great desire to be A Mother in general: vast swathes of motherhood are quite horrific and I really cannot recommend them. Do I exaggerate? Maybe, but when you're in it, a little exaggeration is allowed.

See, it takes a village to raise a child and, for the most part, our village has been my husband and I. We don't have family close enough to call up to come over to take the baby for an hour, and all of our friends work. It has just been us, often it has just been me. And it has been hard - relentless, in many cases. One night, crying, I handed my husband the baby that had been howling without a break for the previous three hours and said, "It's like some cruel form of punishment." I meant it: with too little sleep and too little relief, I felt like the infant was just draining me of my last dregs of energy.

But here's the very weird thing about motherhood - as opposed to Mytherhood, where everything is always sunny and women gush about how they never knew the reason for their lady bits until they popped a baba - certain amounts of it are utterly joyful and they make the rest of it bearable. Sometimes this joy is wrapped up in physical pain, like when you are woken from deep sleep by getting your eye socket battered with a plastic fish - you wake up to the sight of a smiley, gappy-toothed face shouting "Mumma! Mumma!" And there is nothing I have been prouder of in my adult life than seeing my son take his first steps. I doubt I would've been that proud if I had taken them myself. He falls asleep holding my finger but when he falls asleep, I actually hold his heart.

Which is how I feel now, three months after finding out that I was unexpectedly pregnant again. My first reaction - and feel free to hate me if you're struggling with fertility issues, I'd probably hate me, too - was to cry. And cry. And cry. A full day of crying and wondering how on earth I was going to cope with two children under two. How were we going to manage financially? With our jobs? How was I going be able to care for two babies when I had often felt exhausted and drained from minding just one?

Then we did what you have to do  - what we did when John had bronchitis and we spent every night for two weeks walking him up and down the living room so he could get some sleep - we just darned well got on with it. We adjusted to it, we rearranged ourselves around it and we accepted it. And soon enough, we were cautiously happy about it.

So was I Destined To Be A Mother, as the Mytherhood would leave me to believe? I don't think so, but I was clearly destined to be the mother of my children, because they came to us when we didn't even realise we were missing them. Maybe that's my mytherhood.
Who knows?
Posted by The Gingerbread Lady at 10:34 PM 12 comments: