When Scraps Take Over 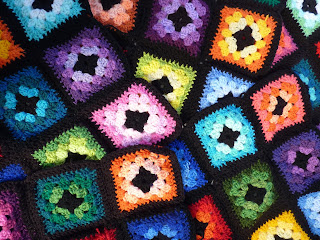 Sometimes, the blanket you make to use up your scraps (thrifty crafter here) takes on a life of its own, and it's no longer a little side project but starts to grow out of proportion.

So here's the blanket that created the scraps: 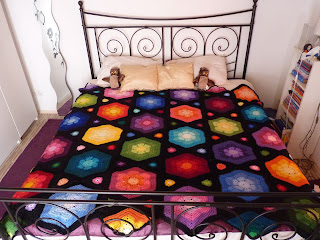 And here's the scrap blanket. 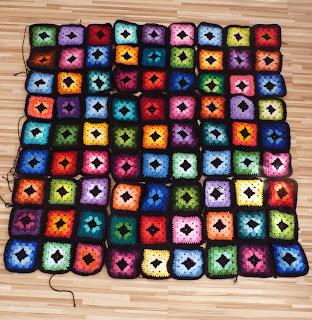 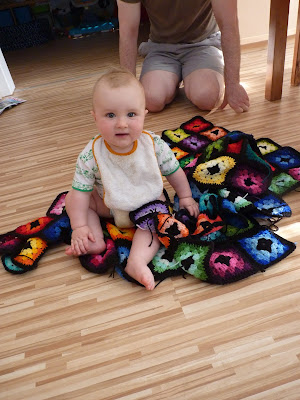 Posted by The Gingerbread Lady at 11:27 AM 8 comments:

Gauge.
For a start, it's a word that I always want to write guage. I don't know why, but gauge always looks wrong.

As a crocheter, I laughed at gauge a lot. I mostly crochet household stuff, so a centimetre or inch off here or there doesn't make that much of a difference. But knitting is a whole 'nother ballgame and knitting things that are actually supposed to fit people is an entirely different kettle of fish. But I decided, in my usual gung-ho fashion, to just knit a sweater for my niece (again, this word looks better written neice) and started on one that was for a child six months older than she will be this winter (she'll be two this year).

I ended up with a jumper that would fit my ten-month-old son. And I'd make him wear it, gender stereotypes be damned, except ... well, it is a tad too girly. It's my first time doing colour-work - fair isle or intarsia, I believe it's called - and the fact that I can knit English-style and continental has been very helpful. Indeed, I thought stranded knitting would be an immense pain in the posterior, but it actual livens up a rather slow and painstaking process (as a crocheter, you get used to quicker gratification - bigger stitches, faster work.) Now I want to knit one of those Scandinavian-style sweaters with reindeer and snowflakes. I figure that if I make one for my husband, it might end up fitting my poor two-year-old niece.

Or I might just try a gauge swatch.
Sigh.

In which she talks about poopoo

Baby poopoo, but still. You have been warned.

My 9-month-old son was standing over me, singing: "Lalalalalala rarararaa dadadaadadaaa!"
I was lying on my side, he was standing by my stomach, gripping my shoulder, singing with gusto. As I watched him (proudly, of course) a glob of drool formed at his lip and abseiled downwards, hitting my eyelid.
I did what any mother would do: wiped it off and applauded his rendition of the Lala song.

Before having a baby, I was a bit more - how shall we say it - reticent about the sharing of bodily fluids and functions. As one would be. Mother Nature, however, has a way of shutting this reticence off when it comes to your own offspring. Perhaps it's because they sprang from your loins or perhaps it's because your natural feeling of boundaries and privacy get trampled on within a fortnight of being splattered with newborn poo, wee, spit up and slobber. You realise that the term 'baby shower' no longer involves nice gifts and fun games, but a wad of wet wipes and sometimes even a bucket.

My son is learning to share, which in itself is an immensely touching and rewarding thing to witness. Sadly, at the moment, he most loves to share soggy rusks and slurped-upon apples. He proffers them magnanimously and we, gulp, lean in and nibble them with suppressed reluctance: "Mmmmmm! Delicious! Thank you very much, John! Mmmm!" If we don't take up his generous offer fast enough, he sticks the foodstuff in our eye or nose - whichever orifice is closest.

See - a year ago there is no way I would've touched anything previously licked or slobbered on (yes, I am aware that that sounds somewhat dodgy; move on, please), now - because small babies don't actually realise that their mothers are independent beings and not an extension of themselves - anything I put in my mouth is likely to be pre-tasted when a fat hand, lightning fast, reaches out and grabs it out of my grasp. And it's not only food - anything I possess is fair game. If I take my mobile phone out of my bag, he drops whatever-it-is-he's-holding and swipes it off me. My earrings are always poke-worthy and my wallet and handbag have teeth-marks. If he could sleep with a hunk of my hair in one hand and his father's beard in the other - why, that would just be baby heaven.

And that's not all. He can't quite walk yet, so I have to walk behind him, holding his hands, as he marches around the park or the botanical garden, trying to kick the flowers (he doesn't have a hand free, you see, so he wants to kick them to see them move. No, I don't allow him to. My child will not abuse The Nature) or other children's footballs. It's back-breaking work. A couple of days ago I lumbered past an elderly lady sitting on a park bench. She made sympathetic noises as I passed, bent like the Hunchback of Notre Dame. "Enjoy it!" she called out. "It won't be long before he won't want to hold your hand!"

That's true, of course. And, if we're lucky, he won't want to share pee, poo and soggy rusks with us, either.
Grubby fingers crossed.

Posted by The Gingerbread Lady at 10:53 AM 3 comments: