Gingerbread Mammy phoned me on Sunday to give me a run-down on all the action in our town. This is often like the Births, Deaths and Marriages section of a major newspaper, except that there is often an indepth genealogical footnote to each entry ("Lisa Kenny had a baby by C-Section. That's Lisa Kenny from the Dry Cleaners, her mammy worked in the Winkle's newsagency at the weekend - remember the blondie-haired woman with the funny eye who used to sell the Cadbury's Creme Eggs after Easter Sunday mass? Her grandda had the greyhounds and we used to see him walking them down by the railway every morning on the way to school?" etc.
I have no idea who any of these people are.)
She also keeps me up to date on my father's antics - he has a new laptop. He had another laptop that was (helpless pause), well, it was pretty good and then there was a new laptop on the market that could (helpless pause) - do other things that the first one couldn't so they exchanged it for this new one which can do (helpless pause) other things. She thinks.
"But it's an Apple," she adds. "By the way, you haven't posted on your blog recently, missy."
"I know," I say. "But I've loads of photos of the blankets I've been working on, so I'm going to put them up later on."
Miffed pause.
"Ah, we're not very interested in crochet," she says. "We prefer the other kind of posts."
I suspect my parents are primarily interested in posts in which they play the starring role. And with this introduction, I hope I have kept them happy for tonight.

Now, on to the crochet.
This is what I'm up to now: 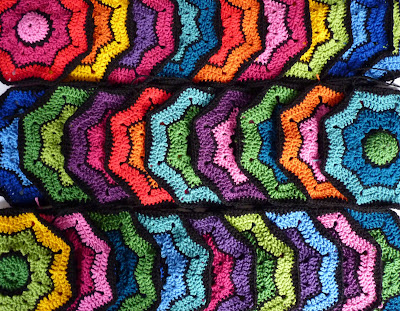 The pattern for this afghan - provisionally entitled the Tiles Afghan (because they look like ... well, tiles) - is being tested by half-a-dozen dynamic crocheters that I have locked up in a top-secret facility, guarded by FBI agents and a pack of vicious dogs. While they are checking the pattern for incidences of my (in)famous numerical fuzziness, I've been trying the pattern out in different ways. This is a baby blanket in cream and denim blue, which I call the Dutch Tiles Afghan - because the pattern looks like Delft tiles. 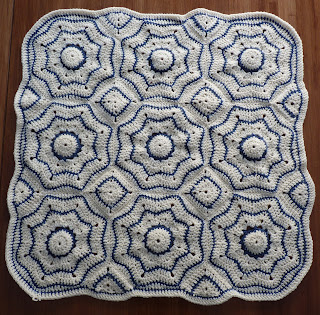 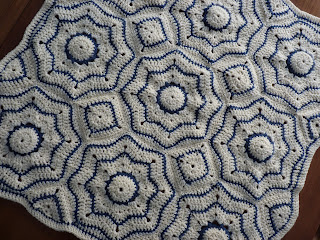 Posted by The Gingerbread Lady at 9:07 PM

I feel inferior. I am crocheting with white. Plain white. These. Are. Lovely. Sigh, Gingerbread Lady, I like both kinds of your posts — the "other kind" and the crochet kind. Keep them up, pretty please, and I promise to keep coming by.

Crikey, that really DOES look like Delft! And the multi-colored ones are gorgeous :)
And I like all kinds of Gingerbread posts. I think my favorite (so far) may have been the one about making the tea, possibly because I have been making much nicer tea ever since reading it!

Love the Delft baby blanket..And I do lke both tpes of posts, too

Loving the rainbow of tiles...fabulous

I love the secondary patterns you can see in the Dutch Tiles blanket. I would never have thought to look for them, or to crochet this pattern in just two colors but it's wonderful.
Although I'm always in love with your bold bright fun and smile inducing array of colors. Can't wait to see the bright one put together.

Quinn: I am so glad I changed your tea-making life. It's all been worth it, I can retire now :-))

Love the Delft blanket! Just finished telling DH how amazing you are! I never would have thought about going with only two colors because I love the bright multi's so much, lol! I love all your posts too! :) LOL! Must have missed the post about the tea. You mean you don't just put the tea bag in the cup of hot water for a couple of minutes then drink, LOL! Have a great day!

Looking forward to your pattern. I think the Delft Tile one would look neat in a medium green and white too. Love it! :-)

Carla! Tea is an ART FORM! My parents running a training course for tea makers (Quinn passed with flying colours). Here's the post:

Hmmmm... I, uh, do boil when making our obligatory Southern iced tea. (Luzianne, thank you. No other.) I make it all the time and drink it year round, unsweet, which makes me A Very Bad Southerner since all Good Southerners drink it super-sweet. However, if I am making a single cup, well, I admit to the microwave and no, it does not boil. Guess I'd better trot over to your link and take a look.