Thank you to everyone who was kind enough to comment on the colours used in the Realta afghan. I've had requests to do a kind of colour tutorial or guide for those of you who want to make something similar.  I'm going to try to explain how I organised my colours in a layperson's terms (because I am a layperson!) and I hope I succeed in doing so. If I had known that the pattern would become as popular as it is, I would have charted its progress carefully - as it was, a lot of it was done by just following a few guidelines I set out in my head. I'm going to try to explain these guidelines to you as best I can!

First of all, here are the yarns I used:

The next step is to organise your colours into a rough colour wheel. You want your colours to look like a circular rainbow - red - orange - yellow - green - blue - purple - pink - red. I used thirteen colours, plus black.


Note: the computer screen does not reflect the true colours accurately. I've mostly used a German yarn brand called Bravo Schachenmayr, (click on this link to go to the colour chart for this yarn), which is our cheap'n'cheerful acrylic.  The names/numbers of the colours I have used from this range are given in brackets beside the descriptors I have used below,

For example, look at this octagon. It's deliberately small because I want you to squint your eyes and look at it as a block of colour - you should see one bluey-green blob.

In this octagon you can actually see three separate colours that blend together to form a single unit of colour. Now look at the photo of the finished blanket - again, pull back from your computer screen and squint a bit. You should see blobs of colour: a reddish blob next to a blueish blob next to a pinkish blob and so on. 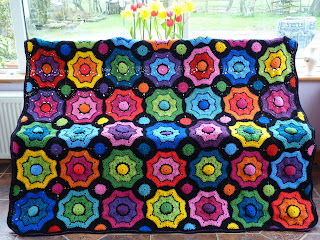 I think this is one reason why the blanket looks harmonious in its randomness: there is a colour unity within the octagon, the contrast is only seen when the octagon is placed next to a neighbour from a different colour family.

How do you make a 'unit of colour'?
I formed units of colour throughout by choosing my colours according to my rough colour wheel: I tried (as far as possible) to choose three yarns that came side-by-side in my wheel and used these colours in the octagon. For example, I did a red/orange/yellow octagon, an orange/red/yellow, a red/yellow/orange, an orange/yellow/red etc. 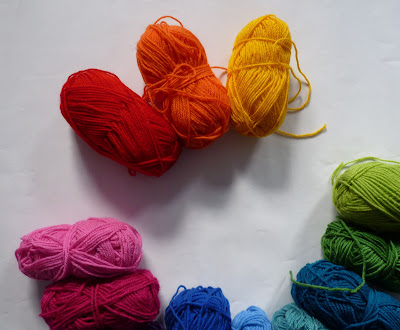 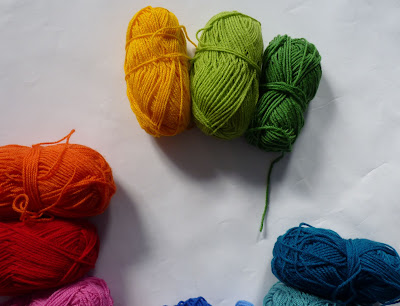 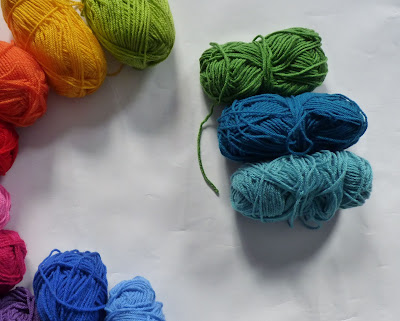 The only exception I made was not to group the colours 9, 10 and 11 into a single octagon - they were too dark together, compared to the surrounding octagons. Sometimes I cheated a little bit and pulled a colour from the general neighbourhood, as opposed to next door, but mostly I stayed within my guidelines (not rules, just guidelines!)
Method in my Madness. Sort of.
When it came to putting the blanket together, I resisted the very strong urge to make a list, a diagram, a chart and an Excel file (which I love doing. Nothing like a list to gladden the heart) and simply relied on my powers of squinting to arrange the blanket in a pleasing way. I put the motifs side by side, stood back, squinted and tried to make sure that there wasn't too much blue or pink or orange or green in a particular place. I really wanted the colours to fall randomly and not have an "arranged" look to them.
The circles-in-squares were added last, and the rule I used there was to add a colour that did not appear in the octagons around it, or only appeared in the second tier of the octagon (so there are no two circles of the same colour side by side, and the outer colour of the octagon is never the same as the circle-in-the-square next to it.)
I hope this has been useful to you but I also hope that you have fun experimenting with colours and shades, too. One reason this afghan was such a pleasure to make was the fun I had working with so many colours, mixing and matching yarns to find a colour combination that was pleasing to the eye.
Best of luck!
The Gingerbread Lady