I learned a new word recently: threenager. It describes the delight that is a moody, irrational, temperamental three-year-old. And frankly, readers, I quaked. I have a two-year-old son and he is currently in the throes of Tyrannical Toddlerdom. I used to look at children writhing on the floors of supermarkets, red-faced and hysterical, and think, "How embarrassing! How mortifying! Why don't the parents do something?"
Oh, yes, those were the days when I could revel in smug judgement. Smudgement. When I have children I'm going to make sure they never behave like that.

- pause for laughter -
Now I'm the mother standing off to the side, scratching dried yoghurt off her t-shirt while her child throws a conniption on the floor. I could care, really I could - but I'm often too tired to bother. And this might be the 42nd hissy fit in a three-day period; and if it's my child writhing around the floor, the cause of the tantrum might be any of the following (and many more besides):
a) the cockerel on the front of the cornflakes packet looked at him funnily
b) he doesn't want to be in the trolley, he doesn't want to walk beside the trolley, he wants to hover in the air above the trolley
c) he wants to eat a raw egg from the carton and I won't let him
d) he loves me, why won't I carry him?
e) he hates me, why am I carrying him?
Basically, sometimes I can do a SuperNanny move on him and distract him swiftly, but my son John is not easily distracted. He is eerily focussed and won't be fobbed off just like that. Sometimes I swoop him up and remove him to a quiet place. Sometimes I just let the tantrum run its course and exchange sympathetic been-there-done-that looks with parents of older children.

This morning, John woke at 6 a.m. and in a gesture of marital love that you will only understand if you have kids yourself, I swooped him up and left his father and little brother fast asleep in bed. We got dressed and slipped out into the quietness of the city. I hate getting up early, but I love being up early - if that makes sense. I love the stillness of the early morning, the lemon sunshine and the chill  in the air. John and I used to spend a lot of early mornings together, but since his little brother came along, we haven't had much chance to get out alone. This morning we walked side by side the entire length of the town.

We walked across the town square, where someone had decorated the concrete with chalk mandalas in the night: 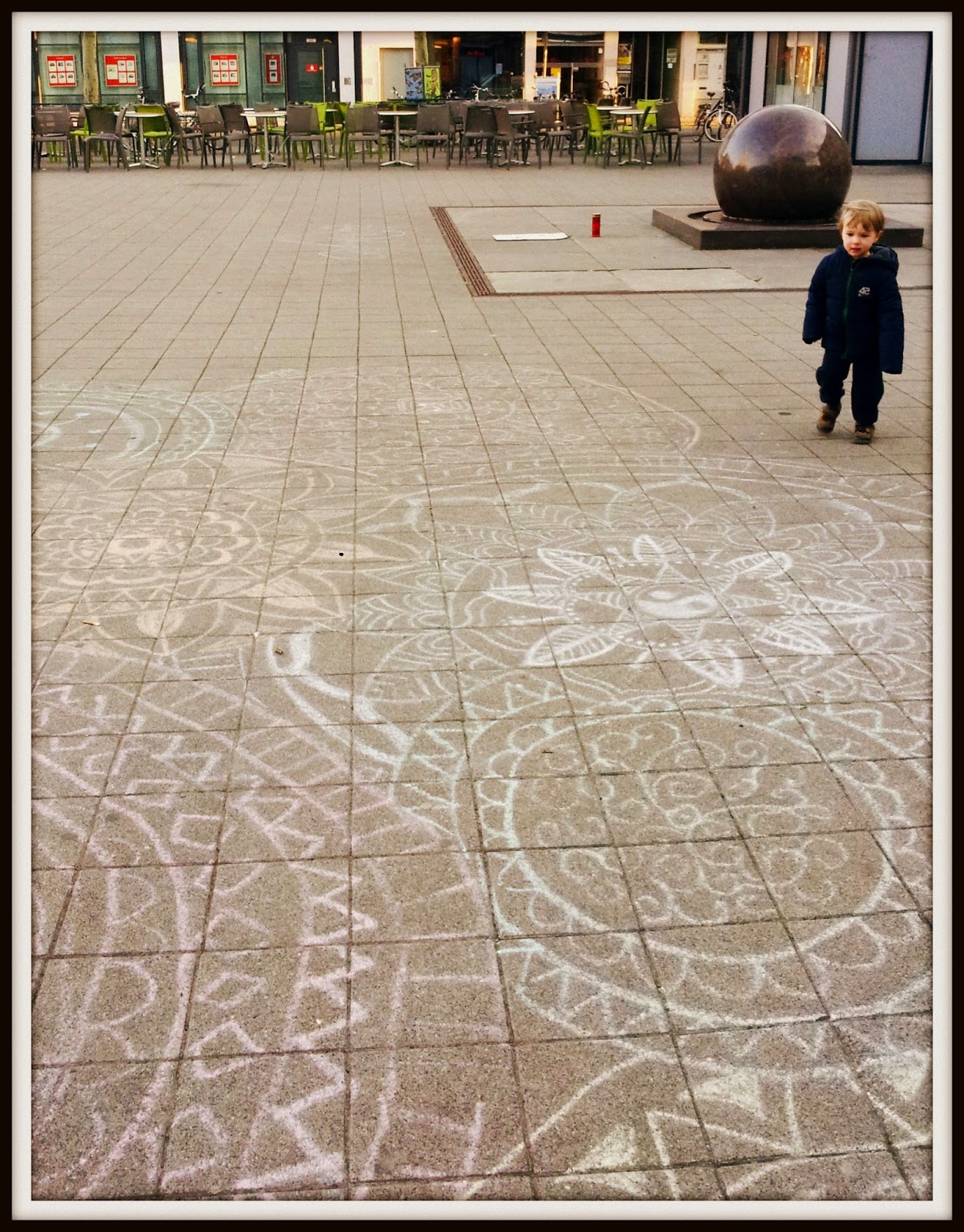 We walked to the bakery and bought a chocolate croissant, then ate it together on a park bench. 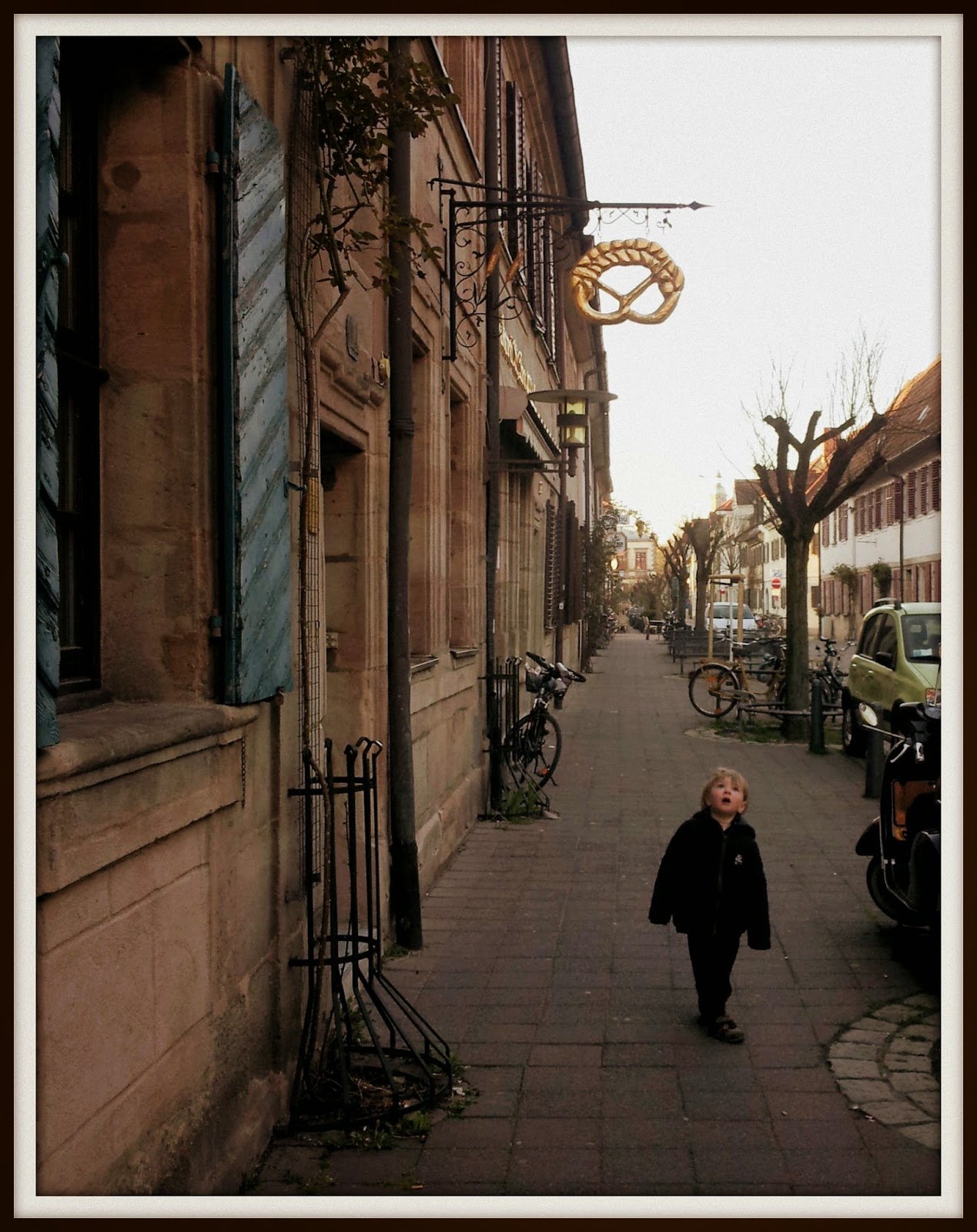 And took a bus home, just because we wanted an opportunity to sing 'The Wheels on the Bus' - well, he did the singing and I had to clap along. More about the singing some other time. 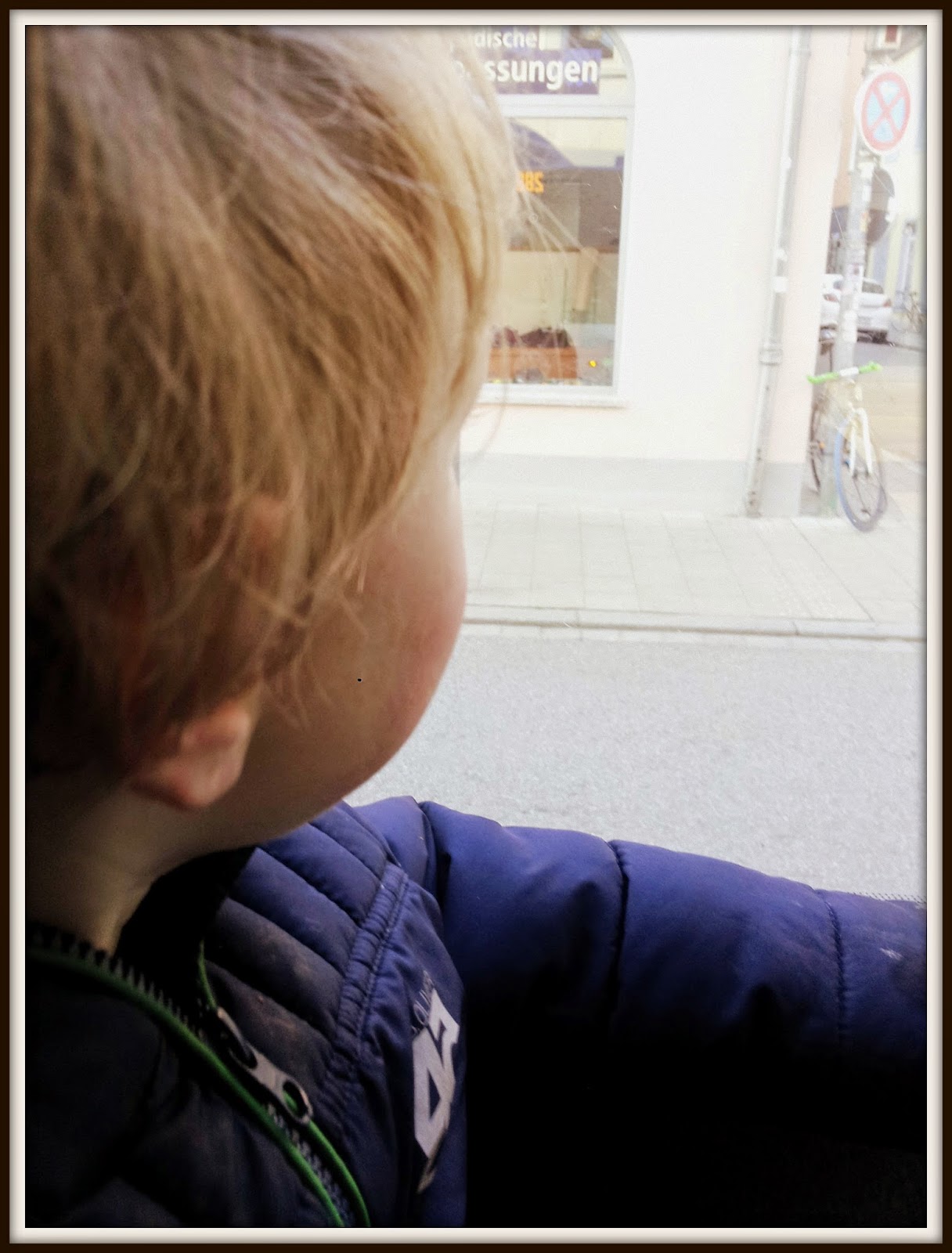 We got home in time for breakfast but even as we climbed the stairs, my son was screeching, "Papa! Mama and I went on a secret walk!", an indication that his future will not be in the CIA or diplomatic field. But the walk did us good: no tantrums, no fights. We should really do it more often (just not tomorrow. Tomorrow is Papa's turn.)
Posted by The Gingerbread Lady at 10:21 PM 2 comments: