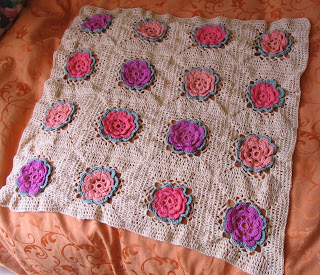 God knows where it is now. Being realistic, the chances are quite high that it was tossed or disregarded or ended up in a thrift store or bin. But there's a teeny-tiny chance that the person who got it appreciated it. Liked it. Maybe even loved it. Perhaps there's a three or four-year-old out in the world somewhere who owns this blanket and fingers the flowers and counts the petals, the way I used to do on my sister's crocheted flower blanket. That would be nice.
I hope so.
Posted by The Gingerbread Lady at 7:21 PM 10 comments: