When I'm feeling smart and witty again, I'll tell you about my Potential Life of Crime as a pregnant woman. In the meantime, I'll show you what I've just finished: 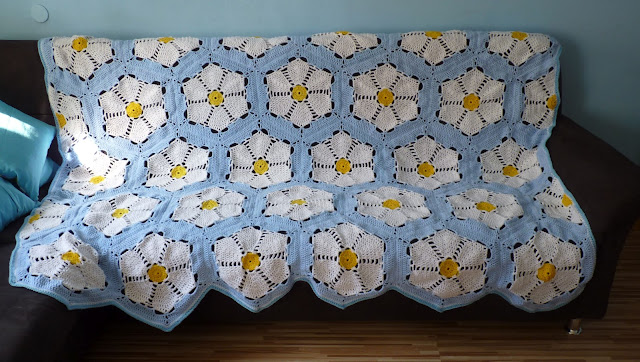 This started off as a round-ish blanket because I didn't want the bother of designing a half-hexagon to straighten out the edges: 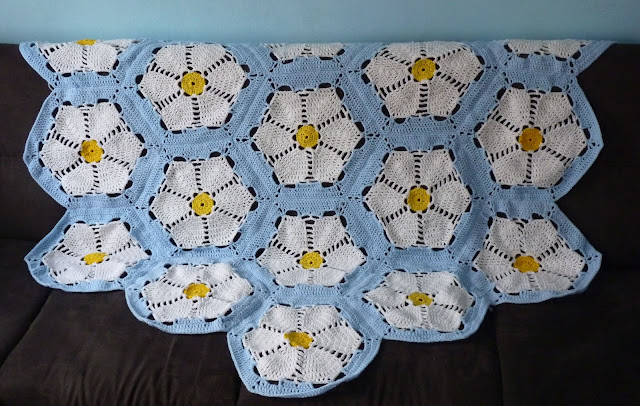 Sadly, my OCD tendencies just could not cope with the chaos and a solution had to be found, even though I was reassured that round-ish blankets are also quite fetching and have their place in home décor.
But ...
I - just - could - not - deal - with - it

Already someone has suggested that this pattern would make a nice Christmas afghan, with red flowers (poinsettas) and a dark green background. Hmmm!

Now all I have to do is write up the pattern, take the photos, get my testers on their starting blocks and then I can finally offer it for sale - maybe even before the Gingerbread Cookie makes his appearance.
Posted by The Gingerbread Lady at 10:28 PM 14 comments:

And back home they went...

Well, Mammy and Daddy Gingerbread made it safely back to Ireland, just in time to avoid the real August heatwave. Mammy Gingerbread spent the holiday fanning herself with pieces of paper and magazines, unwilling to believe that the gentle heat was far from the scorching temperatures a typical August might attain. Today, however, the mercury in the thermometre peaked at 36°C / 97°F and my husband and I thanked our stars that my parents were safely home in Ireland - otherwise we would've had to deliver my mother to the local emergency room for resuscitation.

Sunshine notwithstanding, the Gingerbread Parents seem to have had a good time. We wandered around looking at things, ate copiously and often, drank litres of tea (= it's never too hot for tea.) We even Got Culture. We not only did the rounds of all the cathedrals the local area can offer (and there are a lot), we unwittingly managed to finagle our way into the Albrecht Dürer exhibition in Nuremberg, despite the fact that the tours have been booked out for weeks and waiting times run into hours. How did we do that, you ask? Well, I asked a passing curator if the queue for the exhibition was very long - I really just wanted to know if I had to take one of my daily 7563 trips to the loo beforehand - and instead, recognising my Delicate Condition, we were swooped past the waiting masses and delivered to the door of the exhibition. I was protesting in German - no, no, really, not necessary, I didn't want to jump the queue - tailed by my parents, who didn't have a clue what was going on. No one paid much attention to us - I mean, we mightn't have even wanted to see the exhibition, it might have been a general-interest enquiry about the length of the queue - but we were ushered through the curtain and found ourselves inside.

We quickly split up. My father, an artist, made his way slowly and methodically through the crowds and looked at each painting properly - checking out the competition, basically. My mother and I decided to get a more general overview of Dürer's work at a brisk pace, weaving in and out of tour groups and tightly-knit packs of senior citizens.
The upshot? Dürer painted a lot of pictures of himself, did you know that?
"He was a bit fond of himself, that fella," my mother remarked with a sniff.
He was, indeed.

But that wasn't the only - or, indeed, the best cultural event of the day. When we got outside, we heard a ruckus down the street.
"What's going on down there?" my father asked, pointing at the crowds and floats.
"That's the gay and lesbian parade," I said. "But we can go back through town another way so we can avoid the crowds."
"God, no," said my father. "Sure, we'll have to go down and see that, too."
So while I flopped on to a bench and fanned myself with an exhibition brochure, my parents stood at the edge of the footpath and enthusiastically waved to the very big ladies in their three-storey high-heeled boots, my parents bopping in time with the techno music. Be-wigged, feather-boa'd drag queens blew them kisses, which my mother returned, and they waved at the local Leather Aficionados with some reserve (when two dozen men in leather jackets, shaved heads, dog collars and parachute boots marched by, my poor parents were afraid the parade had been infiltrated by Neo-Nazis and were not sure about the political correctness of returning their friendly waves.)
We had to wait till the last float had passed before I could drag them away.
"That was brilliant," my father said.
"You wouldn't see that at home," my mother agreed.

She's right. In our little town in Ireland, most festivities involve tractors: the St. Patrick's Day Parade involves a few (usually pulling floats with Irish dancers), the local County Show revolves around agricultural machinery of all kinds and the town reaches a frenzy of excitement at Christmas when local farmers dress up as Santa Claus and drive their vintage tractors down the main street in convoy. See the pattern? There's no techno music, no sparkly confetti, no blond wigs, no leather whips, no women dressed as policemen, no men dressed as Marilyn Monroe. Of course, I don't think our town is big enough to have a gay and lesbian community large enough to fill a float in the St. Patrick's Day Parade, much less put on a full parade, but it would certainly make a welcome change from tractors.

Posted by The Gingerbread Lady at 10:29 PM 8 comments: 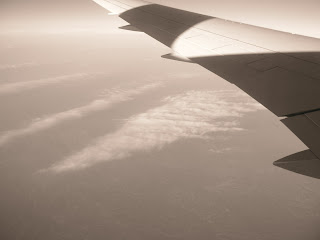 So keep your fingers crossed that their trip is uneventful - that the people in Amsterdam are as helpful and friendly as I've always found them, that Schiphol Airport is as straightforward as I last found it, that the flights to and from Ireland are smooth and punctual.
Otherwise, I'll never hear the end of it.
Posted by The Gingerbread Lady at 12:19 AM 7 comments: