This is my limpet: 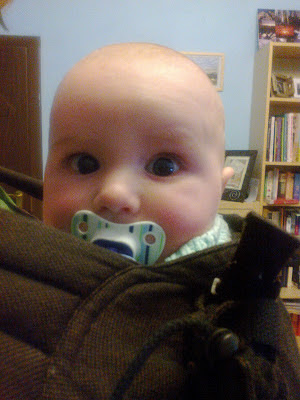 He's in his favourite place, strapped to me, his head bobbling back and forth, trying to look over my shoulder at More Interesting Things (there are always More Interesting Things. And, sadly, More Interesting People - usually the person not holding him. But I digress.) From the beginning onwards, he's been the kind of baby that just likes being in the thick of things, and the purchase of a baby carrier (from the German company Storchenwiege - the Stork's Cradle) quite honestly changed my days, allowing me to do stuff with two free hands!

Alas, the little porker is growing and has now hit 17lbs - nearly 8 kg. Carrying him around is no joke, and while he endures time on his playmat or in his chair, they're clearly only second-best to mother. So while I still can, I lug him about. We talk while I wash up (badly) and we sing along to Dean Martin (neither of us knows the words, but still). At some point, he'll fall asleep on my chest and when I rest my chin gently on his head, it reverberates with tiny snores.

And despite the aching spine, I mostly don't mind it. Here's why:
When I was pregnant, Mr G and I visited another couple and their 4-year-old daughter. They were asking the usual questions: When was I due? Was it going to be a boy or a girl? Did we have a name picked out? And they started to tell me about their daughter, who - as a baby - was an incredibly demanding child. She clung to them incessantly. She would only sleep upright, on one of their shoulders, so they took it in turns to doze on the sofa all night long, with the baby nestled on their shoulder. And they did this all night, every night, for the first six months of the baby's life.

"So no matter how bad it is," the father said, "No matter how much he keeps you awake at night, just remember, it could be so much worse! It could be like us - taking it in turns to stay awake with the baby, sitting up on the couch!"
"For six months!" the mother chimed in. "Six months!"
Mr G and I looked at one another and, I swear, we shuddered.
The other couple laughed - oh, the naiveté of young parents.
"But look at her now," I said. "She's a lovely girl, so you must have done something right."
We watched the little one pirouette in a princess outfit, a perfectly nice little girl.
"And do you know what?" the father said. "I would give anything - anything - to go back in time and have one more night with her as baby on my shoulder till the wee small hours of the morning."

(... while his wife stood behind him, mouthing the words: "Never again. Never. Again. Never!")

This post will involve chests.
But it will also contain biscuits - or cookies, if you will.
You've been warned. 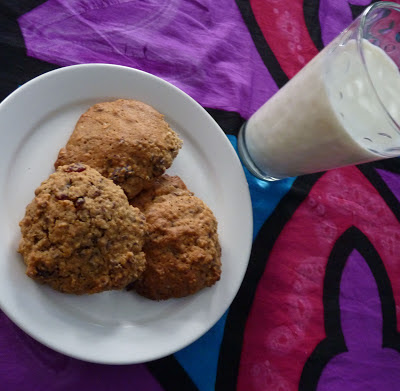 Anyway, as my chesticles are no longer simply living rent-free in my jumper and are finally earning their keep in my new role as a Yummy Mummy, I find myself having to keep up enough supply to satisfy my little porker of a son. Up until now, I had been relying on obscene quantities of chocolate biscuit cake, but I thought I ought to do something a little less decadent to maintain production. In other countries, particularly the US, one would turn to a pill or tablet of some form with a very scary name - domperidone or motillium, an antidopaminergic drug (no idea what that means, just copied it from Wikipedia to look smart) - but here in Germany you are prescribed a tea.

Thus, I went off to our local herb store with a note from my midwife in my grubby little paw: 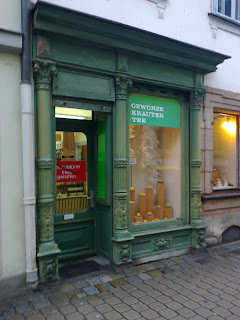 and picked up a bag of stuff that looks like it came straight from a café in Amsterdam:

It contains majoram, dill, black cumin and boxthorn. It tastes ... virtuous (= disgusting but good for you.)

So I decided to make lactation cookies. Now, if there were ever a name to put you off a foodstuff, then it's 'lactation cookies', but the idea is that these cookies contain galactagogues (substances to increase milk supply). I found some recipes on the internet but they were revoltingly sweet, so I twiddled a bit and came up with the one below. These cookies are very delish, and if you are not currently lactating (and do not desire to do so) never fear: they will not suddenly make you leak dairy. However, they are healthy - oh, who are we fooling? They take a nod in the direction of healthy - and would make a nice present for a new mother.

You need:
Put the flax in a small bowl, cover it with water and let it soak and swell.

Cream
Add
Sift in
Mix in
and

A note about the ingredients:

Posted by The Gingerbread Lady at 5:11 PM 5 comments: