Footstomp!
After my triumph with my Twenties Hat, where the image that was in my head more or less translated exactly into reality, I had a sad failure yesterday. This: 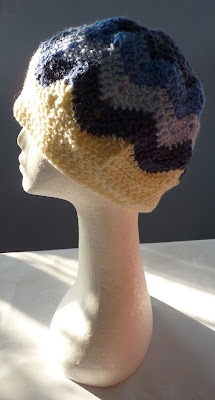 See, I was walking to work on Friday when I passed a girl unlocking her bike. She had a crochet hat - a snugly-fitting, beanie-style hat that had a ripple pattern, starting with a five or six-pointed star shape. I paused momentarily to gawp but she was already hopping on her bike - and she was gone.

"Darn it!" I thought. "I wanted to have a good look at her hat!"
I'm not really sure about the etiquette of hat-hijacking: "Oi! You on the bike! 'Scuse me, can I borrow your headgear so I can figure out how to make it?" seems the most direct, but possibly also the most disconcerting approach. Never mind, I thought, I'll probably never see her again.

But I did! She sped past me about two hours later and this time I had my arm raised to flag her down and ask her about her beanie - but she was too fast. So I had a look in the Ravelry pattern database for something similar but to no avail. All that remained was to make one of my own. This is the first attempt: 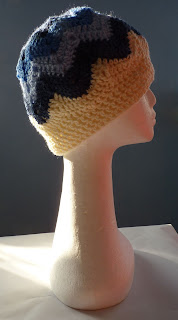 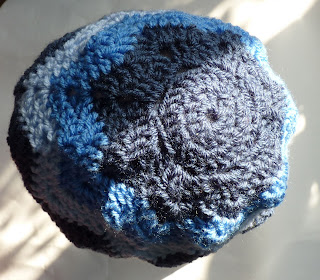 And I'm afraid it looks a tad like a tea-cosy. Or, at the very least, it doesn't look like hers.
Epic sadface :-(
And back to the drawing board.

Posted by The Gingerbread Lady at 8:18 PM

you'll get it I have faith. epic peptalk =)

So what is so "epic" about this? Perhaps my standards are not what they ought to be but honestly, I see no "epic" failure. It's kind of cute, really. Well, maybe a tad long and covering the eyes some but hey, crochet is EASY to rip and re-do. Ask me how I know. And well, maybe a few too many stitches and too loose, but again, riiiippppppppp... there. Wasn't that satisfying?

Hee hee. I do love a nice rriiiiiiippppp!
The shape is trickier than I expected and it's hard to get the ripple-top to descend downwards and form a snug round shape instead of a bouffanty look. But I will get it. I will get it. And someone with a big head will get a present of this hat.

It's a hybrid hat--a cross between a beanie and a beret! Seriously it's cute.

I think it's adorable! I can't wait to see the "fixed" version.=)

I think it's really cute. Someone with a full head of hair could easily wear that hat. Remember, manequins are bald so the hat won't fit the same. If you could share the pattern, I'd love to make a few to go with the beanies I make for the homeless shelter. That way the ladies could have something a little cuter for them. Just found your blog and love it.

This is exactly the hat Im looking for for my granndaugher. She wants a zig zag hat and I thought a ripple pattern would work, but I can't find a pattern. I like the way yours started as a circle and then zig zagged and then back to a round edge around the face.