Socks Are Not The Boss Of Me

When Gingerbread Mammy was a young 'un, she was - apparently - a champion sock knitter. This is the legend she perpetuated all through our childhood: "You should have seen me turn a heel! I turned the best heels in the class!" Apparently, she churned out socks at the speed of light but although we saw her produce the occasional scarf or baby sweater, we never got to see the Mythical Socks. Readers, this is the challenge Gingerbread Mammy and Gingerbread Lady are going to undertake when I get home in spring: she is going to teach me how to knit socks.

In advance of this great mother-daughter bonding session (which will probably be gatecrashed by my other sisters, first to mock and then to sulk because they're not being taught to knit socks and then to mock again because you can buy a 5 pack of socks for €2.99 at Primark), I have taken to the needles myself - I'm kind of like Rocky in training for the big fight. Yesterday evening I tackled double pointed needles again.

First off, for the crafters amongst you, let me just say that I tried the Magic Loop method and knitting with 2 circulars. They seemed awfully fussy: lots of dangly wires and pulling and yanking. Besides, many years ago I saw a woman at a doctor's surgery knitting with DPNs and she did it so neatly and daintly that I fell in love. I became determined to learned. I tried, and I tried, and then I tried again. Each time ended in a blue cloud of cussing: starting off with DPNs is like playing cat's cradle with an evil steel octopus. Those needles are very poky and if you don't keep an eye on them, they'll entangle themselves in the yarn, your hair and - most bizarrely - the lace of your bra (through two layers of clothes!!)

But yesterday I got beyond the starting horrors and managed about two inches: 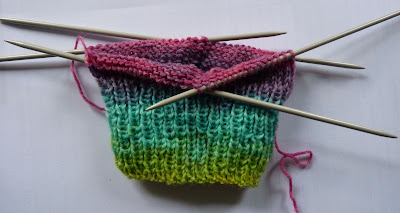 Now, I know you're all very kind people, so you'll rush to reassure me that it's not too bad for my first attempt. In fact, it's dreadful. In a couple of places I purled instead of knitted and vice versa. My stitches are wobbly and when you turn it inside out, you'll see that I even managed to drop a stitch twenty rows back and I didn't notice: 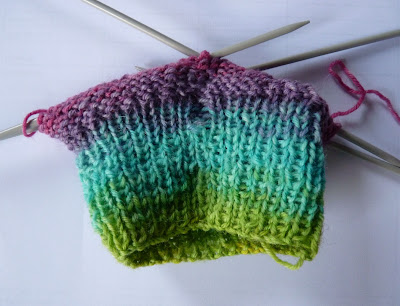 But I showed those knitting needles who's boss! = Me! And I have about a dozen minor puncture wounds to prove it, but they're not the boss of me! So, being the glutton for punishment that I am, I'm going to rip back and start again - and I'll keep at it till I can produce a piece of ribbing that actually does not look like something the cat dragged in.
Posted by The Gingerbread Lady at 7:37 PM

DPNs are like knitting with a porcupine. They require their very own set of skills. And when I use them I remember all the Bitterly Self-Deceived who claim the only thing there is to knitting is to knit and purl. Ha! — But, Gingerbread Lady, I think you're gonna make it. That is not too shabby for someone who is first wrestling with 4 or 5 little sticks at once!

I hate DPNs. But that's just me. They get entangled, one tip is always somewhere where it should not be and pricks you or one needle falls out of your knitting.
I am deeply grateful for the invention of circular needles. But in general, I prefer knitting flat anyway. However, for socks and hats it often makes more sense to knit them in the round which I do on circs then. I learned to knit socks with the book and DVD "Der geniale Socken-Workshop" (Ewa Jostes, Stephanie van der Linden). The DVD was particularly helpful!
Good luck!

Let me assure you we will be there, glowering and gloating whilst eating chocolates and waving our cheap- sock- clad -feet at you...

DPNs are NOT for me. I tried magic loop and successfully knit ONE baby sock and never did another thing on it. I'm actually in the process of de-cluttering and took all of the DPN's I own and dumped them in the Donate box. Cursed little things.

omg dpn's scare me. I bit the bullet this weekend and took a knitting class. I've restarted my scarf about 6 times yesterday...sloppy stitches, too tight stitches, dropping stitches. I finally got it so that my knits weren't so tight they'd strangle and my purls weren't so loose they'd disappear and I got about 3inches in and realized I'd started purling where i should have been knitting and vice versa. I get to rip it all out again.

I will definitely be there to watch and mock, as your youngest sister it is my duty in life :)

Thank you for visiting me! I enjoy reading your blog. Your 'no nonsense' thinking and ways are endearing. I love reading about others in different countries to compare life, and of course there's Zuppy. I am partial to Jack Russells. :o)

I wanted to say that I too tried to knit. Several days I came home from work determined to master it. Sadly to say that I am not near as disciplined as you are and I let them whip me. I got terribly frustrated. I put them back down and picked them back up about a week later, thinking that it had sunk in my brain and I could do it! Well, I ended up dropping and picking up stitches and couldn't figure out how that happened. So I ended up putting them away. :o( Maybe one day I'll try again.

Sweetie, you DO know that you can crochet socks, right? Well, you can. And they are lovely. And they are so easy to do you will laugh till you cry. http://reneeseastofeden.blogspot.com/2009/09/10-cool-things-about-crocheted-socks.html

Haha! Yes, Renee, I do - I even crocheted two dozen baby socks for my Advent calendar :-) But knitting with DPNs is DIFFICULT and I want to learn to do it! (Aaaargh! she says, pulling her hair out as she does...)

I love DPNS but I do not love some of their qualities. One is the way their ends sometimes seem to be where they shouldn't, poking me uncomfortably. Another is their sneakiness. I hate it when they quietly lose stitches off their ends without saying anything, leaving me to find them and pick them up later. This is one reason why I prefer longer DPNs. One used to be able to buy them in a 9" length, but the 7" ones seem to be all that is available nowadays (at least in my locality) and I have heard of 5" ones that some people love, but I can't imagine why.