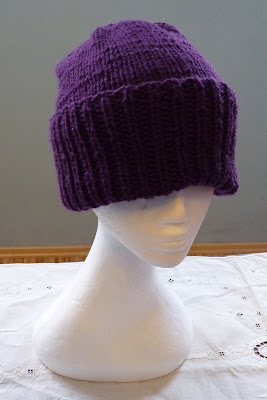 I knit a hat. It's not very good, because I'm not a good knitter. I'm getting better, but even as I knit my fingers are screaming "Noooooo! Noooooooo!" and I find it difficult to get them to settle down. As an adult, it's especially hard to relearn a mechanical process and knitting has been my Everest for many's a year. At this point, I'm still in base camp with the Sherpas but I'm sharpening my ice pick as we speak.

When I learned to knit at the tender age of six, I picked it up wrong. At least, that's what I was constantly told - but no one could fault the end result. It looked like knitting that had been done the 'right' way, except I was holding the needles oddly and inserting them into the back of the stitch. Then my knitting went through a 30-year hiatus till I moved to Germany ... and then one day, I saw a girl in my student residence knitting and realised with a shock that she was also knitting wrong. In fact, she was knitting even wronger than I did - she was doing something that looked a bit like a mishmash of knitting and crochet. I showed her the 'right' way to knit (except, of course, I was still doing it wrong) and she was astonished: did I really mean to say that millions of people in the British Isles learned to knit in what was so obviously the wrong way? Astounding.

Now, readers, that was back in the pre-Internet days so we couldn't go online and Google knitting styles to find out that there are many ways to knit - and they're all right. She was knitting Continental style and I was knitting English (or throwing) style. As a crocheter, I thought I should re-teach myself to knit in the Continental fashion because it meant I could hold the yarn in my left hand as I do with crochet. I also thought I could correct the way I knit and finally learn not to knit in the back of the stitches, as I seem to have been doing for thirty years. So I went on to YouTube and re-taught myself and after a couple of nights of cursing, managed to pick up quite a bit of speed and, although my tension is still a bit wonky, actually became relatively comfortable with it. Yay me! I thought. I was on the road to bistitchuality! One step closer to my dream: socks on dpns!

Except, I'm not. Not that I've taken a step backwards, just a kind of bizarre detour. I was reading a thread on Ravelry (a huge internet forum for knitting and crochet) about how difficult it is to purl Continental-style and I thought, "That's weird! I think it's really easy!" Back I went to YouTube and watched the videos again - and it turns out I'm still knitting wrong. For crying out loud!  So I've started another hat to see if I can re-train myself ... again.
Posted by The Gingerbread Lady at 6:28 PM

What does it matter, as long as the end result looks good? :)

For years my mother refused to teach me to knit because she is right handed and I'm a lefty. Then my left-handed aunt taught me how to knit when I was 20. Right handed. Go figure, but I will say that my mother has always been a better "doer" than "teacher"!

Just knit the way you are comfortable...I'm sure I'm doing something wrong, but it looks okay to me and I do knit continential and do a mishmash for purl....I could not knit the English method, just couldn't get my fingers to do it...I don't consider myself a knitter yet, just a strangler of yarn with two sticks

You wouldn't be the only one who learned to knit (and purl) wrongly. In my case, I was taught wrongly as well, only in Continental. The person who taught me didn't remember how to purl, so I have no one to blame for wrapping the yarn the wrong way 'round on my purl stitches. Interestingly enough, if you knit through the back loop and wrap the purl the wrong way around, your stockinette will look just fine.

It took me a year to realize I was knitting through the back loop. It took five years to realize why my stitches were twisting; of all the people who watched me knit, not a single one mentioned that I purled...differently. Alas, I still haven't quite recovered from the re-training process. That said, it's still a far sight better than my crocheting.

As someone who has never successfully knitted (nor really tried, to be honest), I relate to your description of knitting as your Everest. Me, I'm still in the phase where I'm negotiating with the recalcitrant travel agent for the cheapest tickets to Tibet.

However! I AM planning to make a serious try sometime in 2011. Which is this very year. Knitting just seems so much more complicated than crocheting, what with two pointy sticks and the infinite variety of stitches... and now, as you have articulated, the way that stitches can be different just by how you twist the yarn ... (sigh)

Anyway - love your hat. To my eye, it is perfection itself. Belated Happy New Year!

Your hat looks lovely! When I started to crochet years ago, I was told I held my hook "wrong". Now it turns out I was just using a knife hold and it's perfectly acceptable!

As for the knitting, have you heard of knooking? It's a way to actually make a knit fabric (not a knit look-alike) using a modified crochet hook. There's a knooking group on Ravelry, check it out!

now that hat looks just fine, although I sympathise with your experience re learning knitting,
still, now that we have youtube and ravelry etc, we can all learn and or re-learn knitting, purling, continental or British style...
i've taken up spinning, let's see where that ends up...
love that photo of your dad's house and dog, tell your dad that's a great shot!

I taught myself to knit (ha ha I use that term losely. I too am still at base camp) by a video checked out from the local library. It taught me to knit in the back of the loop. I have always always done it this way, and the very few projects I've managed to finish, look no different than any other knitting. I too am a crochet'er for 35 years now, but am determined to knit socks. one thing I've noticed though about knitting in the back of the loop, there's no reason to ssk, just knit 2 together. it cuts out that extra step. take that for what it's worth.

Thanks to everyone for your comments and for your encouragement - esp. Joules' tip, which led me to learn that I knit in the combined Continental style (sob with relief - I'm not alone!)
Julie, I'll definitely check out knooking, that sounds like the perfect solution :-)

I knit combined continental, too, or as my friend's German mother called it, Russian knitting (mom is Polish, so that makes sense). Has anyone called it thus in Gingerbreadland? There are as many ways to knit as you can imagine, and none are wrong or backwards. It took me 3 years to teach myself to knit regular continental so I could follow an American pattern; it feels so, so wrong.

I actually have the exact same problem; excepting that I was taught to knit continental from the start, and it is still SO hard for me to purl, I HATE it!! I am an avid crocheter, and knitting just hurts my hands, I can't seem to get the hang of it, even though I know what I'm supposed to do. Oh yeah, and I'm one of those weird people who is only comfortable knitting if I have the left needle pushing into my tummy for support, haha! I'm glad to hear I'm not the only one who finds continental difficult, I am seriously considering switching to English style as all my friends do (and I'm an American!).

Hi, I am passing on the "Stylish Blogger Award" to you. You can pick it up at this page on my blog: http://homeofalonelywoman.blogspot.com/2011/01/my-blog-won-award.html .

Theres more than one way to knit so you are not knitting wrong, just different. Theres some good groups on Ravelry too.

Knooking is something else, you use a crochet hook to make a knitted fabric, its been known by other names over the years.

some links, with combined kntting you have to do increases and decreases differently to most people as patterns are not written that way :) first link has a conversion table.

Thanks for the comment on my crochet JAYG tutorial ( you did see the whole series didnt you?) i didnt invent it but couldnt find a tutorial online either. I love it as it uses no extra yarn and just looks so pretty!

I would of replied to your comment but cant see how that works!

my rav name is ellensmum :)

I thought that purling the English style is rather more difficult. I have never understood all this rant about purling. I love it. I knit Continental style. My mother knits some sort of Continental influenced Russian style (she purls differently which takes longer but I do not know what exactly she is doing ... ;) ).
But well, as it has been said: Knit in the way it works for you and don't let anyone tell you that something is "sooo hard" unless you have tried it yourself. Things that are hard to do for others do not need to be automatically hard for you.

Wait. WAIT! You may be knitting in what as known as Combination (Combo) style, Gingerbread Lady. There is nothing, NOTHING wrong with it. I knit that way myself as do many others. In fact, such a knitting persona as Priscilla Gibson-Roberts talks about it at length in her book "Knitting In the Old Way". And Annie Modesitt wrote a whole book called "The Knitting Heretic" specifically about Combo.

For really clear (though small) videos of Combo take a look at Grumperina's explanations and vids. http://www.grumperina.com/comboknit.htm

I don't know exactly what you are doing but Combo is legitimate. Period.