Once upon a time (yes, another one of those posts) a few years ago, I saw a documentary about dolphins kept in captivity and trained to take part in dolphin shows à la SeaWorld. There was footage from a show on the Spanish holiday island of Ibiza, and as the audience left, the German film crew stopped people and asked them what they thought about the conditions in which the dolphins were being held.
"Also," said one portly German lady, "ich finde, der Delfin hat einen sehr glücklichen Eindruck gemacht!"
(Well, I think the dolphin made a very happy impression. )
At which point, I exploded into a rant, Liamo-style: How did she know? Was it the dolphin's smile? Did he wink? Did he raise his eyebrows jovially? Did he wave or make jokes? No, he did not because He! Is! A! Dolphin!

Liam is my father. He can - at the drop of a hat (or even as your trilby descends downwards) - launch into a lecture (rant) about any number of hotbutton issues. I have not only inherited his hair and freckles, I have also inherited many of these same hobbyhorses. Just as text (letters, cards, emails or advertising copy) written in the voice of a toddler by adoring adults makes my hair stand on end, I also dislike it intensely when people project human thoughts and emotions on animals.
"I went home last night really worried about my tax returns and when I got in the door, my Shih Tzu Lucy just looked at me with her big brown eyes, and I knew she was thinking, 'Don't worry about your tax returns for 2009, concentrate on 2008!'" says my colleague.
I bite my fist.
The real conversation between woman and Shih Tzu went like this:
Woman: "Oh, Lucy, my tax returns are late again! I'm going to get into trouble! I'm going to have to pay a fine!"
Dog: "Blah, blah, blah, Lucy. She looks a bit sad. I wonder if I'll get fed now? Blah, blah, blah."

Of course, this only applies to OTHER PEOPLE'S PETS as the fact that my parents' dog has already starred in several of his own blog posts will attest. My parents' dog, Zuppy, is a very intelligent and sensitive creature with excellent communication skills. In fact, my father and I recently analysed this picture over the phone: 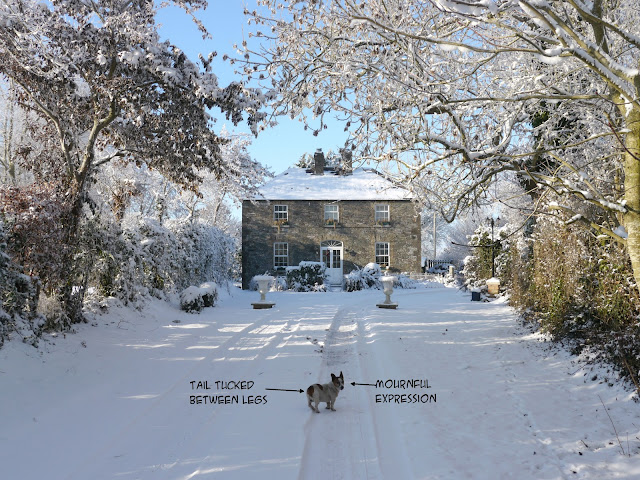 My father went out for a walk on Christmas morning to take some photos and was dutifully followed down the avenue of their house by the Jack Russell. He'd already reached the entrance to the driveway when we realised that he was dogless and he felt Zuppy's beady eyes boring into him. When he turned around, Zuppy was performing a tableau of abject misery. He allowed my father witness his piteous state for a couple of seconds (because this dog does not like snow) before he fake-limped back to the house. My father and I established that he was Not Happy in this photo and pondered whether he was genuinely miserable or milking a bit of sympathy - or both. I think my father tends to believe in Zuppy's innocent little soul, whereas I have a sneaking suspicion that he's a bit of a drama queen.

I can't believe I've just typed this post. I'm blaming my father for this one. (And Zuppy, the manipulative cad.)

Posted by The Gingerbread Lady at 11:54 PM

Funny! Poor Zuppy... and that is your parent's house? It is gorgeous! What a setting!

Awww - little Zuppy is soo cute. JRT's have a myriad of expressions. I laugh at my Leo all the time. He's very jealous of me crocheting. So that he will step onto one leg while looking at me. And then he will stick his little head in between my face and my crocheting hands....still looking at me. If I move my hands he will then move his head further so that I cannot see what I am doing. As if to say 'PAY ATTENTION TO ME NOT THAT!!!'. :O)

Can I come live in that gorgeous house?