Like most Europeans, I grew up familiar with a whole host of American cultural references that I both knew intimately and, at the same time, knew nothing about. As a result, a kind of cultural wistfulness ensues - a yearning for the 4th of July picnic you never had (= and I really don't like picnics). A longing for Twinkies and Hershey's Peanutbutter Cups (= anything with a 20-year shelf-life scares me and I hate peanuts). You end up with a mishmash knowlege of unknown and unknowable events. For example:

THE PROM
A big dance that means A Lot to American teenagers. Usually full of mean, bitchy girls who try to become Homecoming Queen (???) but this role inevitably falls to the Ugly Duckling nerdy girl who looks like the long-lost female member of The Proclaimers (for those of you who don't know The Proclaimers: Shame On You. They're the Scottish duo that brought the world the infamous ear-worm '500 Miles'. Anyway.) Girl turns up at dance transformed into a vision of beauty by kindly fairy-godmother-like friends, glasses discarded, braces dumped (orthodontists US-wide shudder at the thought) and the dumpy saddlebags we thought she sported beneath her baggy jeans turn out to be slender, race-horse-like thighs. She ends up with the most popular chap in the school, who is a Jock (no idea what that is. I think it might be good. It sounds a bit rude, though.) This is what always happens at a prom.

So there you go.
Every now and again, though, something exciting happens in the form of something mundane: you get something that you've grown up hearing about and, although it's very boring and everyday in the other culture, it's desperately exciting in your grubby paws. Hence my excitement when I first encountered - tada! -
Kool Aid! 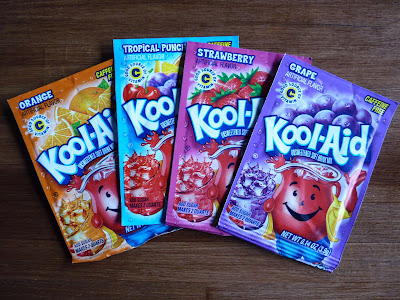 Let me backtrack a bit:
I saw pictures on the Interwebz of other people's hand-dyed yarns. And every other dyer used Kool-Aid. Sure, I'd heard of the stuff - it aids you become kool - but wasn't sure what it was, exactly. I did some research and discovered that it's kind of a powdery stuff that you add to water to create a flavoured drink. Reading up on other people's sites, I also discovered that it is to be treated like a dangerous substance: people recommended wearing latex gloves. Latex gloves! Covering countertops with plastic! Wearing an apron or old clothes! It seemed quite exciting: I mean, the little packets look innocuous enough - they're in vibrant, primary colours and feature a little cartoon jug, full to the brim with toxically bright liquid, smiling reassuringly ("Drink me! Drink me!") but they seem to have the potential to Wreak Havoc on your kitchen. Frankly, dear readers, I was intrigued. It is not often that one can hope for an element of danger whilst crocheting, so the opportunity to dabble in what was very obviously a foolhardy and reckless undertaking with a clearly dangerous substance was just too much to resist.

So I obtained Kool-Aid. I was sent some by Nicole (hi, Nicole!), my swap partner, and found a handful of packets in a Chinese-American shop. Let me get that clear: it's run by a Chinese family who stock Asian and American food, as opposed to a Chinese-American family.
"Is this stuff nice?" I asked the two hip and happening young Asian men at the counter.
"Eeeuugggh, God, no - " said one of them. "The only one you can drink is grape. The rest are - " and he finished the sentence with a series of graphic sound effects.
Cautiously, I sniffed a packet of mango-flavoured powder. Bleeurgh. I don't know in which universe mangoes smell like this, but hey - the things I do for my readers. 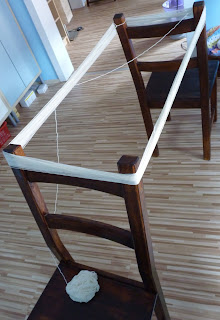 I set up two chairs in the living room and started winding my yarn. I wound it into skanks (as Mr G insists on calling them. His English is v. v. good but he has occasional vocabulary flights of fancy - he seems to be mixing up hanks and skeins with unfortunate results). 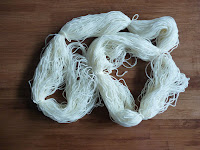 The yarn is from the 99c store: apparently no one except me wants undyed sock yarn. (And, mind you, I not only want it, I want it all. But I just bought 4 for starters.) We watched a couple of YouTube tutorials and marched into the kitchen.

Let me just tell you that we're not usually a let's-share-our-hobbies kind of couple, but Mr G is a chemist, so I thought he'd be handy to have on hand. I thought he'd enjoy spending time with his wife, pottering about, mixing stuff, but he declined:
"It stinks," he said, "It just stinks. I can't be in the same room as this stuff" - said the man who spends the day in a lab juggling beakers of nitric acid and ammonia. I wasn't as sensitive to the smell, it was very sweet and somewhat ... chemical. Not that they're trying to hide it: the packet is clearly marked with the words ARTIFICIAL FLAVOR (but, please note, they are also caffeine free and a source of vitamin C!)

Intrepid is my middle name (actually, it's not, it's Brigid) so I proceeded to dye. And it was fabulous. Fabulous. It was messy and unpredictable (the browny skein was supposed to be more of a blue/purple combo but I threw in a packet of the stinky mango at the end and it all came out kind of ruddy-coloured) and let me add that I did not use latex gloves. I did not cover anything. No aprons were donned during the dyeing of this yarn - in fact, I actually dyed my yarn wearing one of the few white tops that I possess. I didn't have 'proper' equipment: I used Nutella jars, my spaghetti pot and an old chopstick as a pokey device. I wasn't quite sure what I was doing, so I just did what I felt was right. It was nerve-wracking from start to finish - but you know me, readers, I like to sail close to the wind. And this is the result: 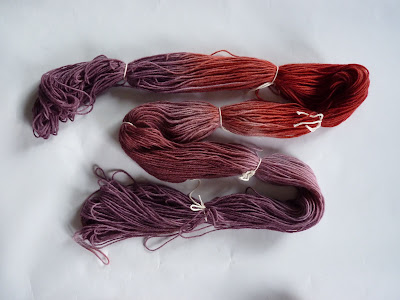 Not great, eh? But I got better: 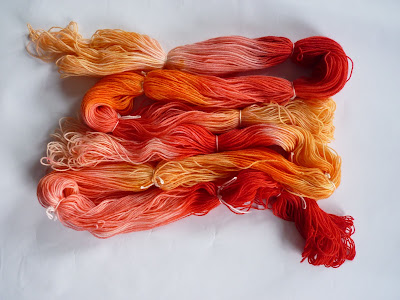 Today I am going back to the 99c shop to stock up on white yarn. I'm going to wrestle the last packets of Kool-Aid from the hip Asian boy's hands and I'm going to dye my little heart out.
Huzzah, readers! I have found a new passion!
Posted by The Gingerbread Lady at 12:04 AM

So much fun. I dare not attempt it though until I get all of my stash worked up, house cleaned from top to bottom and totally organized which could take, well years maybe! You did a fantastic job and good to start with the dollar store stuff.

I laughed through this entire thing, especially the prom and the description of Kool-Aid. If you need anymore, let me know, they don't cost much....I haven't drank it in years, but loved it as a kid....

Hey have you tried Poprocks? They are an experience...

Hilarious blog entry. It was recommended to me by a friend in the U.S. I will add your blog to my blog roll.

Koolaid is the liquid equivalent of Twinkies, but you can't dye yarn with Twinkies.

I really enjoy reading your posts! lol. I never liked Kool-aid as a kid (it probably didn't have the added vitamin C either back then). Always preferred Hi-C, it's loaded with artificial ingredients and sugar! Your yarn dying experiment turned out great! :-)

I have heard of Kool-Aid, but only when dying yarn, never heard of anyone drinking it and never seen it here. And who could not know The Proclaimers 500 miles - many a party night spent singing it - and not in tune.
I particularly like the second batch, but I'm thinking the first batch may work up nicer - interesting to see the results

Grew up on Kool-Aid. Haven't tasted it in years but am thinking about dyeing with it. That' so funny about you and hubs disliking the smell. I guess because we American-bred children know it so well it usually just smells sweet to us.

Oh I am so glad you tried it! How fun! Your yarn batches came out great! Can't wait to see what you do with them!
I am so thankful for everything you sent me~so are the kiddies,,,the gummies are so soft and yummy!
mmm, the coffee~well you know it's good :)
hugs! niki

Kool Aid is near and dear to my heart. That and Tang were the drinks of choice back then. I actually still love it but don't drink it that often. What's cool is they now make it in little packets that you pour straight into your water bottle and shake. Loved your comments on it and American culture...sometimes you forget that everyone doesnt have the same frame of reference. :)