But the initial results were pleasing: 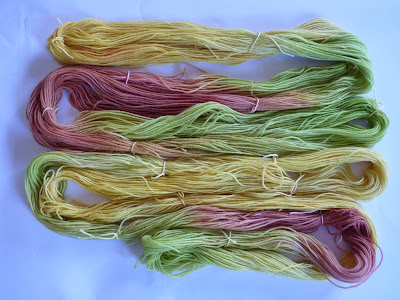 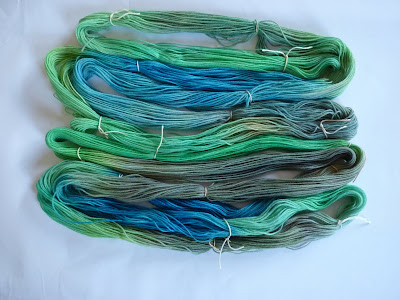 Unfortunately, having these hanks of wool about made our house smell like a Fish'n'Chip shop (and at this point I would like to note that the Kool Aid yarn now smells faintly fruity and entirely pleasing), so I had to wash them before I wound them into skeins. And then disaster struck: the colours - already muted - washed out. Now the yarn looks tired and faded, and I'll have to re-dye it. With Kool Aid.

See? I'm a convert. Or a Konvert, more like.
Posted by The Gingerbread Lady at 11:11 PM

If you can get them Wilton's frosting dyes work very well.

Unfortunately the only food colouring I can get are German brands and they're too ... (snort of disgust) healthy. They're not artificial enough - the colours don't stay fast. I thought I'd added enough vinegar (well, it certainly smelled as though I had) but obviously not. Oh well, you live and you learn!

Maybe you can do a swap with someone in the US?

Let me know if you want some Kool-Aid

I know the results are great with dyeing your own but this makes me feel like there is just so much work involved. Are you getting discouraged or do you still feel like you want to continue? Curious.

Oooo, I do like those colors. I am pretty sure that dyeing is going to be a big part of my project list in 2011. Like I need another obsession. I haven't tried it yet, but it calls to me. Sorry about the pickle-smell, and then having to go with Kool-Aid anyway. At least you got pretty pics!

Hi! Thanks so much for the name of the Catania Yarn. I found out I am able to purchase it in Canada so will do that! :) Also I just saw the above colours of the dyed yarn you did. Looks lovely. I love the colours. As Denise said, maybe you can swap with someone in US for the Wilton dye, as Canada it is a high price and much more for shipping too! :)