I write letters. Not as many as I used to, but still more than the average person does nowadays. The thing is, with only a couple of exceptions, most of my correspondents are ... well, let's just say people of mature status. This was made clear to me today in a letter from a former teacher: she told me to come and visit the next time I was in Ireland, but to make it snappy because she mightn't be around for much longer - she'll be 90 at the end of the month.

So while other 30-somethings are out enjoying a Sex and the City-style life, shopping for Manolo Blahnik shoes and sipping racy cocktails in the afternoon at chic city bistros, I am sitting at home at the living room table, with my recycled notepaper and leaky fountain pen, writing to nonagenarians. I'm telling you, readers, if you want to walk on the wild side, stick with me. 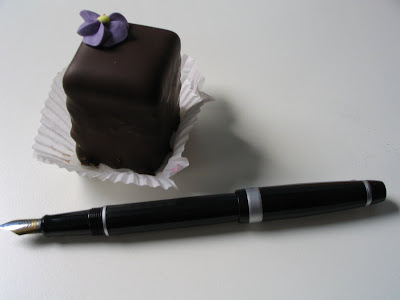 A couple of years ago, my two main correspondents died. I know, I know - it was very sad, but one was in her late eighties and the other was in her mid-nineties, so I have to admit that I'd suspected it was coming at some point. At the funeral of one of these ladies, I realised how many people knew me through my letters to her: my letters were given to every visitor to read. They all knew about my scrapes and japes, they knew about the weather in Bavaria and the Gingerbread Husband's job and the fall off my bicycle and my run-in with my crazy neighbour. It was heart-warming and alarming at the same time. And it was at that funeral that I "inherited" two more correspondents: a young 'un in her late sixties and my friend's best friend, a sprightly gentleman in his late eighties. So I keep writing. Not as often as I should (sadly, guilt is an inherent part of the letter-writing process: I should write more often, I know) but I do go through a reasonable number of stamps a month.

And when I'm sitting at my table, my notepaper and envelopes neatly lined up, a selection of pens and my little cards of stamps, I feel ever-so-ladylike. I feel so ... civilised. Sitting down to write a letter in a world of text messages and blog posts and emails and tweets. In fact, I feel positively Jane-Austenesque, (that is, if Jane wrote her letters with a pot of strong black tea and a piece of chocolate cake.)
Posted by The Gingerbread Lady at 8:39 PM

I think she would (drink tea and eat chocolate cake). :-) I agree letter writing is a lost art. Hope you have a great day! :-)

BTW thanks for the memo on thirtysomethings' traditional activities. I had NOT gotten that one. Whew! Don't know how to swing it financially though... Hmmm

I rather wish I WOULD find an old lady to write to but alas, beyond email my friends won't go and never have. In fact I feel lucky to get even that. — Wait, what am I saying? I AM an old lady! (I can't believe I just classified myself with a lovely young thing in her 30s when I could be her mother!)

Thank you for visiting The Letter Writing Revolution....I have recently discovered that there is a whole community of letter writing enthusiasts out there. Check out the following post I wrote this week with links to lots of other letter writing bloggers. Please consider me someone you can write to and I will write back! My address can be found on the bottom of the post linked below:
http://theletterwritingrevolution.blogspot.com/2010/10/other-letter-writing-blogs.html

I think it is a wonderful thing to do and is much appreciated by the recipient. I love letter writing. It is always nice to get mail that is not a bill!!!!

I miss the pen pals I used to have growing up. sometimes I wish I could just send a letter to a random person in any country, so I could have a pen pal again... emails are quite convenient, but there's nothing like getting a nice, handwritten letter!

Just found your blog! love it!