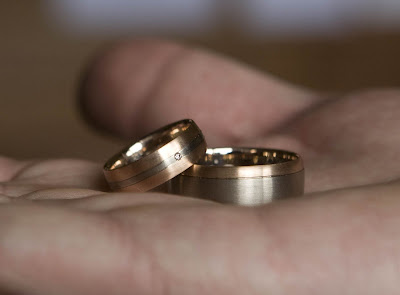 Little Gingerbread Sister is getting married in two weeks. That means that, volcanos permitting, Mr G and I will travel home to Ireland for the thrill of an Irish wedding. It'll be a small affair: just close family and friends. And distant family. And friends' offspring. And neighbours. And relatives of neighbours. And anyone passing through, basically. In other words, I believe the numbers are now hovering at about 300. Our wedding two years ago was a similarily modest affair, despite stringent planning and a snappy bride (me) saying she was not financing a party for half the Irish countryside. Oh, dear. Tsk, tsk. I should have realised sooner that resistance was futile: at one point the Gingerbread Brothers presented me with a list of friends who were coming to the wedding, regardless of whether they were invited or not, and I was advised to bite the bullet and officially invite them, so I'd have "a rough idea of how many were coming".

Haw, haw.
Aside from the invited guests and the semi-invited guests, there were also uninvited guests - two German tourists on holiday in Ireland, who knew someone in the wedding party - as well as a lovely young couple who turned up on the day with a present and had their photo taken by the photographer when they arrived. Their picture has been immortalised in my wedding album, but no one has a clue who they are. And, apparently, the day after our wedding (which was, in itself, a three-day affair), someone was overheard in a local pub, saying he'd been at a fantastic wedding, in a marquee at the Gingerbread Parents' house out in the countryside. Apparently, he'd said it was the best wedding he'd ever been to.
We don't know who he was, either.

But I digress.
The most exciting element of an Irish wedding is not the sheer number of people who will turn up for your shindig, but rather the weather. You might optimistically choose a date in "summer" (those quotation marks are laden with sarcasm), but that has no bearing on the kind of weather you're going to have. We got married in the middle of August. It was also the wettest day since weather records began in Ireland (and that's no mean feat). As we were bopping away to the wedding band, the fire brigade were pumping water out of a neighbour's driveway, as severe flooding had effectively rendered his family stranded.

In any case, while we're sweltering in the heat over here, Ireland is experiencing a delightfully quirky July. That's a nice way of saying that it has rained non-stop for about three weeks. When I phoned Mammy Gingerbread last night, she reported that the rain was beating off the window panes. Again. But the Gingerbread Family are insouciant, blasé and nonchalant (haha, I knew that French thesaurus would come in handy) about the whole thing: we've held weddings during a cyclone, a volcanic eruption and a heatwave. We roll with the punches.

But I'll tell you one thing: if you want to ensure that a couple stays together, then they ought to get married at my parents' house, Gingerbread-style. Because - I swear on all things holy - one Irish wedding is enough for a lifetime. If you can survive your wedding day, the chances are good that you'll manage a good few years together.
What doesn't kill you, makes you stronger.
Etc.
It's kind of a Nuptial Endurance Test.
(btw, I think we passed.)
Posted by The Gingerbread Lady at 5:03 PM

I simply love your blog! I happened upon it a few weeks ago when I googled some crocheting patterns. I just finished the kitty cat blanket for my friend that is expecting a little girl in August. She loved it. Thank you for the pattern! This blog makes me dream about an Irish wedding. I have quite a bit of irish in me (about 1/4). My boyfriend and I hope to someday visit Ireland.

Hmm, it is nice to know what I have in store for me when my daughter marries. Her dad is Irish, she is 1/2 Irish and 1/2 English....and his side of the family all live here in our little town in Florida, USA. I always knew they were a rowdy fun loving bunch, but I always felt they were saving it up for a bigger occassion, and now I know which one, lol!!! I will keep reading your blog for advice!

I think I would not mind living in a land of frequent rain. I live in North Carolina, in the Southeastern U.S., and it's always SO HUMID here that it may as well be raining - and yet it seldom does. I've lived in this region all my life, and the humidity does not ever become MORE bearable, despite lifelong exposure. I think it's worse because I work in an A/C office all day - so it REALLY hits me like a wall when I walk outside.

I wanted to tell you how much I enjoy reading your blog, though I don't get by to do so very often. I love your writing style and sense of humor. I particularly enjoyed your French adjectives this go-round... leave it to the French to have MANY succinct ways of saying "eh, we just roll with it."