The Star of the Wedding

As I mentioned in my last post, Gingerbread Sister is getting married in a fortnight. She's probably reading this post right now, smug in the belief that this is going to be all about her, the bride.
You. Are. Wrong.
(No doubt she's snorting in indignation right now, tossing her peroxide mane over her keyboard. Serves you right, sisterette. You should be working, not trawling through cyberspace.) 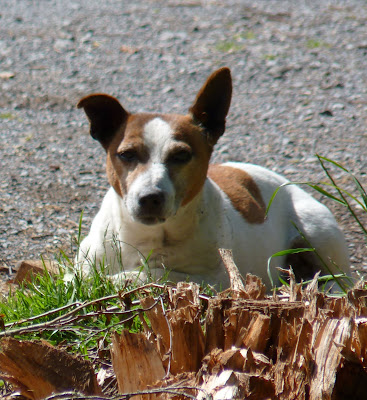 Anyway, this is my parents' dog, Zuppy.

Like many dogs, he doesn't realise that humans tick differently to dogs: he believes that he's invisible if he can't see us (he'll crawl through the kitchen with his head down, trying to avoid eye-contact with my mother. If he can't see her, she won't see him. My mother good-naturedly plays along, strengthening his belief that he has super powers). He also underestimates our cognitive faculties on a regular basis (after he'd killed my father's miniature ducks in a fit of uncontrollable jealousy, he disposed of the bodies, Mafia-style, in a shallow grave. My parents came home from work to find the ducks gone and no sign of violence. The dog looked innocent and the cats were - as cats generally are - non-committal on the issue. Three days later, when our little human minds had long since forgotten the ducks' existence, he dug one of them up and proudly paraded his trophy by running around the house triumphantly, a dead duck in his jaws). He also tends to believe that Big Family Occasions are held for his benefit. In his honour, if you will.

Now, few people understand the workings of a cat's mind, but dogs are like open books. When someone gets married at our house (and I have a lot of brothers and sisters, so it happens more often than you might think), there's a flurry of activity for days beforehand, as the outdoor loos and catering equipment and the wedding marquee are delivered and set up. The cats, inscrutable, view this with great haughtiness and an almost tangible air of suspicion. The dog, on the other hand, runs around the place with his tongue hanging out and his stubby tail waving wildly. "Hurray!" his little face clearly says, "Another party for me! Yippee!"
And it doesn't matter that he gets shouted at at least four times an hour for trying to stick his nose into the caterer's barbecue or down the bowl of a portable loo, or for trying to climb up the step-ladder after the electrician - he's just so excited at the prospect of yet another party for him that his enthusiasm is boundless.

Which is what makes the next part almost heartbreaking. Let me spell it out for you in short:
wet weather + dirty dog + woman in white dress + guests in finery = catastrophe
That's right. On the day of the wedding, the cats will succumb to captivity - with ill-grace and a couple of scratched fingers, mind you - but the dog behaves as though we've taken out his little heart and pounded it off the pavement. He just doesn't understand why - why? - he has to be locked up. At his party. After all, he's been involved in all the preparations. He's helped set everything up. He's chewed the decorations and tripped up the plumber. Why? Just why?

I know, it's heart-breaking. At one sister's wedding we tied him up on a long leash under an apple tree but he chewed through the leash ... and through the cable that led to the generator, which in turn was powering the entire wedding. The marquee was plunged into total darkness - shrieking and screaming - whereupon Zuppy made his triumphant entrance, his tail wagging and head held high. ("Hello, hello. Nice to see you again. Thank you for coming to my party. Yes, I'm here now. No worries. Lovely to see you.") He proceeded to do the rounds of the guests, snagging bits of sausage and steak, having his head stroked and told how wonderful he was (confirming once again that he has super powers), while Kevin the electrician and one of the Gingerbread brothers struggled in the darkness and rain to get the electricity going again.

At our wedding, he was put into his brand-new kennel: a roomy house actually more suited to a much bigger dog than a Jack Russell. He alternated between howling out through the window of the house and trying to eat the door. Finally, another Gingerbread Brother - his heart scalded by the pathetic sight (and afraid the dog would actually swallow the wood of the door) - set him free and Zuppy trotted down to the marquee (ducking his head as he scuttled past my mother, certain that he was invisible again).
"I'm here!" his face said. "Thank you ever so much for coming. Delightful to see you. Due to some sort of misunderstanding, I was sadly detained but I'm here now and am ready for my party!"
And thus he spent the evening on a variety of laps (evident from the muddy paw prints on people's clothes in the wedding photos), eating a selection of hand-picked snacks and treats and convening with the band onstage (he's nearly deaf, you see, so he likes to be up beside the speakers, enjoying the vibrations.) All in all, I believe he had a good night.

As the excitement mounts in the Gingerbread Parents' house, Zuppy may be getting an inkling that something is afoot again. In a week or two, he'll see the familiar sight of the caterer's van and he'll realise that we're planning another party for him. We may even have to accept the inevitable and realise that no matter what we do, this dog is going to attend - we'll have to just forget about locking him up.
After all, we must not forget that he is the star of the wedding.
Posted by The Gingerbread Lady at 5:41 PM

Perhaps Zuppy should be the ring bearer? That way he can be a part of the ceremony itself from the very beginning. LOL. Very fun post, Gingerbread Lady! Love your writing!

Oh thank you for posting about Zuppy. We have a Zuppy who is 18 months old. His name is Dexter. I would have to say they are kindred souls. He even kind of looks like Zuppy. . . .
Great post.
Ciao

Hilarious! I love it :) Zuppy is adorable!