When we moved in, the Gingerbread House was full of Stuff. All kinds of things. The previous owners dumped whatever they no longer needed, and left the stuff they thought we might have use for. Thus, we inherited a selection of heavy mahogony cupboards, some patio furniture and ... Himself.

The wife of the previous owner is from the Philippines and, it would seem, a devout Catholic. Obviously, she thought we were, too (devout Catholics, that is) and left us a curious wall mirror that sports the likeness of the late Pope John Paul II in relief. It's big - at least a metre tall - and doesn't much look like the Pope. At least, I don't think so. 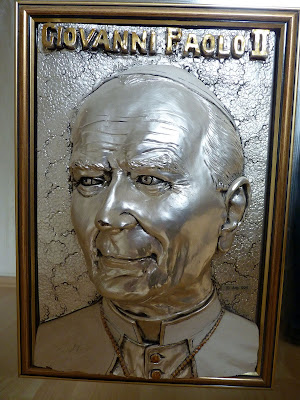 Around the face there's a mirror, so we haven't quite figured out whether it was to be used as a normal household mirror - are we supposed to comb our hair while trying to avoid the Pope's gaze? - or whether it was purely decorative. If the latter is the case, it doesn't seem to have succeeded. Most people who see it tend to recoil in fright - if you come upon Himself in one of the darker corners of our house, he'll scare the bejabbers out of you, let me tell you.

We're now in a bit of a dilemma. First of all, he's got a moniker - we've started to refer to him as 'Himself' and he's a he, no longer an it (as in: we no longer say, "Put that thing away" but rather, "Turn Himself towards the wall so he doesn't frighten the electricians.") Secondly, we're not entirely sure what the etiquette of getting rid of religious imagery is. Thirdly, no one wants him. And believe me, we've tried to pawn him off on everyone who's come through the door - visitors, workmen, relatives. I thought I might be able to get it into my little brother's suitcase to have him bring it back to Ireland - surely, some good Irish Catholic would relish the opportunity to house Himself - but little brother refused point blank to transport our likeness of the Pope back to the Emerald Isle.

So now we're stuck with him. And like so many other things in the Gingerbread House, it has now accidentally become part of our rag-tag inventory. Some day, when I'm grown up, I'm going to have a real grown ups' house, instead of the curiosity cabinet we're living in now. Till then, I guess, we'll have to put up with Himself.
Posted by The Gingerbread Lady at 11:03 PM

Perhaps offer it to a local Catholic Church? Or do you have any hospitals or nursing homes in your area that would like to have it for a wall in the chapel?

That's all I can think of. Good luck!

How about the Goodwill or similar charity? Somebody who really wants it will buy there, I promise.