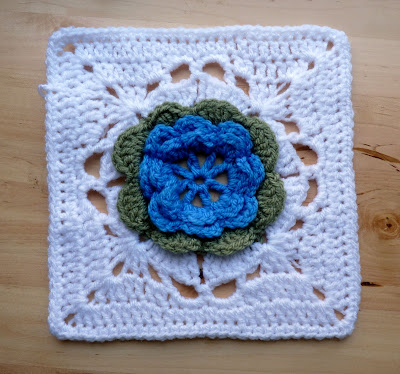 This is a pattern for an 8-inch square. It's also a charity square, which means that while it's free, you are strongly encouraged to use it for good, not evil, and to spread joy and warm fuzzy feelings to people in need. There are a lot of charities that would dearly love squares/blankets/lapghans - the "payment" for its download is that you consider sending at least a square to a group collecting crocheted/knitted squares to be made into blankets for charity ... or donate a blanket using these motifs for a children's charity ...  women's refuge ... homeless shelter in your area. Although this pattern looks quite lacy, it's actually very warm. If you are considering donating squares (and having read the heartfelt appeal above, you probably are), please think about using a more easy-care colour for the background - blue, yellow, grey, black.

The square is called Emily's Roses because when my little sister Emily was a baby, she was given a crocheted blanket with Irish rose motifs. We loved that blanket and I don't mind telling you that I was deeply envious that she had one like that and I didn't. This might have driven a deep wedge in our relationship but things were evened out somewhat with The Ice Cream Cake Controversy of 1981, when I had an ice cream cake for my 7th birthday - and my mother promised the other Gingerbread siblings a similar treat on their special day. But by the time Emily's birthday rolled around in April of the following year, production of birthday cakes made of vanilla ice cream had been discontinued. For a long time she was of the opinion that I, as the eldest child, had been shown preferential treatment with this choice of celebratory confectionery, and I have a sneaking suspicion that somewhere deep in her heart she still nurses a grudge against me, the intensity of which cannot be assuaged by a by-now tatty crochet blanket. I have seen her eyeing my desserts at the dinner table. I have feared for my chocolate cake and apple pie.

I hope that this conciliatory gesture will smooth things over between us once again.
Emily Gingerbread: here are your roses. xx
Posted by The Gingerbread Lady at 2:45 PM

It's a lovely square, and a really good post, definitely made me laugh =)

What a lovely square and cute story. Thank you for both.

Gosh, was it really 1981?? Seems like yesterday ;)) !!
I really love this pattern and very chuffed altogether that it bears my name (I am going to make myself an ice-cream cake in celebration tomorrow)
And that whole "eyeing up your apple pie..." was I REALLY that obvious?
Thank you my little Ginger Nut XXXXX

Rosy altruism, an ice cream cake exposé, and sisterly shenanigans ... what more could one ask for in a post :D

Well done! One must always stay calm and guard the chocolate cake.