Gracey is not her name but she writes a fun blog about her crafting and woolgathering adventures at Life and Yarn or Yarn and Life. I have a suspicion that this lady has a stash I'd give a couple of teeth for. Just a suspicion, mind, but recent posts have confirmed this. In any case, she sent my husband - yes, my husband - a couple of gifts. Look at the name of the yarn ... 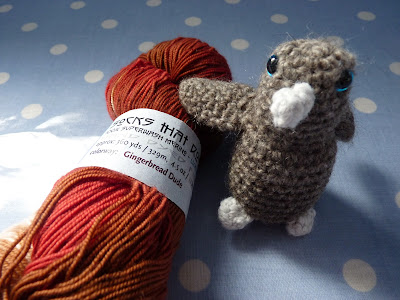 I waved it under his nose and then stole it (bwoahahahaha!) but he got the little critter for his desk. It only took about an hour or two for him to remark, "You know, I think this little thing isn't a mouse."
(Who'd said it was a mouse? I wondered)
"I think - " dramatic pause as he holds it up for inspection "I think it's a bird!"
"Did the wings give it away?" I enquire.
He turns it over in his hands. "Ah! Wings!" he says. "So it is a bird, then!"
"It's a pigeon!" I say. "It clearly has a beak and wings."
He was tickled pink. "A pigeon ... cool ..."
And now the pigeon has become a permanent fixture on the desk, leaning up against the external hard-drive. When someone asks what it is, Mr Gingerbread says in a tone of scorn, "It's a pigeon! Look, it has wings and a beak!"
Yes, yes.
Posted by The Gingerbread Lady at 4:05 PM

MEN! I'd like to think they get more observant every day but alas . . .

LOL! I have to say that I Love your blog. Found you on Ravelry. I am so glad I did. You are hilarious!

Wow, lovely yarn, and a great name for it too!

Funny...it's not the best beak, but yes it's a beak....der Vogel...and I should share the picture of my husband walking through Webs with me while we searched out the perfect grey color for a pigeon...

and Stash,,,yep I's got one...a large one that will grow this weekend at Stitches East...

He's a very cute pigeon too! that yarn looks gorgeous.

It looks like a bird, but i not totally a pigeon. Its cute though

Hahaha! Love the humor of your posts. Glad I found you from Ravelry :)