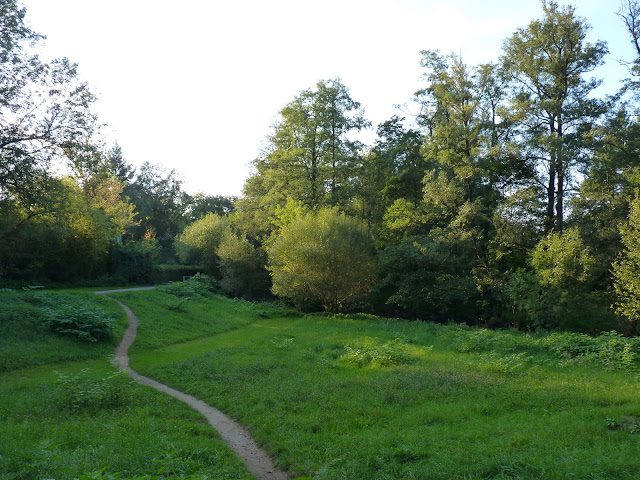 We're experiencing a beautiful Indian Summer right now - in fact, the late September/early October weather has been far more clement and more lovely than our so-called summer. So I took a walk yesterday afternoon down past the hospital clinics to the meadow behind it. The sun was warm, but there was that pale, wintry sky and the first leaves had started to fall. Just as I was returning home, I passed this message on the ground. It says: 'Look for the treasure here'. 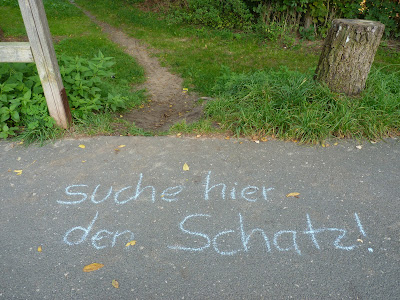 I thought about it, but as I was rooting my camera out of the depths of my Bottomless Handbag, two little children scrambled back up the bank with disappointment written all over their faces. Darn it, I thought. Too late.
In any case, apart from re-adjusting to the start of the school year, I've been crocheting. Not a lot, though - no energy. Instead, I've been stuffing my brain with visual junkfood: True Blood. True Blood, in case you didn't know (and my parents will be reading this, so I have to explain) is about a bumbling waitress-slash-telepath in the American state of Louisiana, who meets and consequently falls in love with a vampire. Because - oh, yes, I should mention this - they 'came out of the coffin' a couple of years prior to the series' start. Lest you wonder if a lone Lousianian vampire would be enough to sustain a long-running serial, never fear: the place is awash with the paranormal. It is veritably crawling with all manner of shapeshifters, werewolves, werepanthers (?), witches, possessed babies, a demented maenad and, for good measure, an infestation of fairies, to which the series producers try to lend credibility by calling them 'Faeries'. Sadly Ye Olden Spellinge does not make it any less ridiculous. Apart from buckets of blood and inter-species copulation (no, Mammy, this is definitely not for you), the main characters are tortured by Inner Turmoil and much scenery is chewed as they Grapple With Their Feelings. My sister and sister-in-law told me to keep watching and, shame on me, I did - though, in its defence, the series is probably much less OTT when watched on a week-to-week basis. A marathon DVD session does not allow one to digest the episodes' content properly: you start to suffer from plot-hole burps if you gulp it down too quickly. (And you end up having surreal conversations like this:
"Are you coming to bed?"
"Just a minute. The vampires and the faery telepath are being held captive by stake-wielding Christians.")
Now I know what happened at the end of the last series so I have my life back and my brain cells can regenerate. Mr Gingerbread says it's my own darned fault: how could I expect a series about vampires not to ... suck? (Puns are the lowest form of humour, I know. Try telling him that).
Then I took up the hook again: 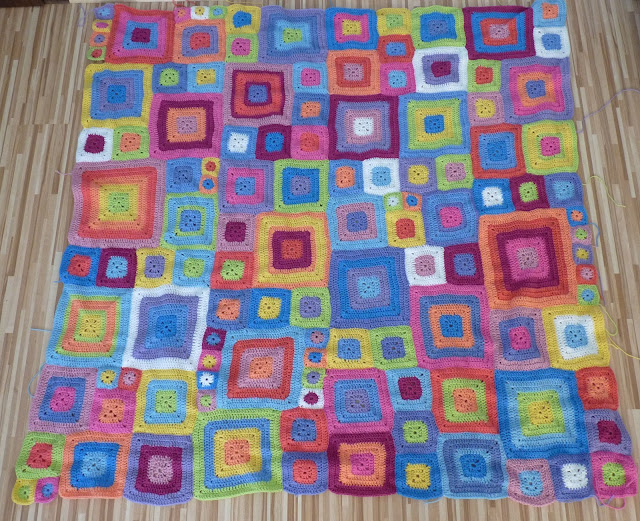 It's nearly finished - just one more panel and then I can edge it and move on to the next project, yippee!
Posted by The Gingerbread Lady at 3:28 PM

I got caught up in the first series of True Blood and when the next started I realized I was over the phenomenon and had had my dose of blood and fantasy. I can't imagine watching it one episode after another. Now, the men? I do miss watching those shirtless wonders!!!

The blanket is visually perfect! I love all the colors and can't wait to see how you edge it. It's beautiful.

That is probably the most beautiful blanket I have ever seen-I am deeply, deeply impressed!

All that talk of vampires and my first thought on looking at this was ... she's used blood red ;D

Whatever shade of red it is it really is a lovely blanket :D

Perhaps you had better read the books by Charlaine Harris that the series is based upon. The first series of True Blood focussed on the first book only, but the next series tried to cram as much as it could from the following 9 books. I love both the books and I love the show, but the books are a bit more special. Plus the books have a vampire character called Bubba who I doubt will ever be on the show, just a bit too controversial I think! Now you'll have to read the books to know what I am talking about!
xXx Helen

That Babette-ish blanket is looking super!

I've neither read the book(s) nor seen the show, although it was a big hit with my teenage daughter who has since moved on to Twin Peaks. When I was a teenager there was a soap opera we all watched called Dark Shadows. Every conceivable ghoul was in it except fairies. Al these things now seem less scary than the news.

Love the afghan. You may get me crocheting, yet!

I agree. The books are much more entertaining and (dare I say) fulfilling.

I lovelovelove the blanket. The colors are wonderful

Thank you for your comments - okey-dokey, I'll borrow the books from the library and let you know how I get on! (See how easy it is to bully me?)