Following my last post, in which I revealed the level of subterfuge I engage in to make you all think my house should be a model for Better Homes and Living magazine, I thought I'd show you a snapshot or two of life in Bavaria. I live in the middle of an axis formed by three very beautiful and very different cities. There's Nuremberg (Nürnberg), which has the mediaeval flair of a Grimm fairytale, then there's Regensburg on the Danube, which - and be sure, the locals will inform you of this at least once during your visit there - is called 'Italy's northern-most city' because of its broad streets, squares and its plethora of towers (they were quite the 'in' thing five hundred years ago) and then there's Bamberg ... that's where I was on Friday. 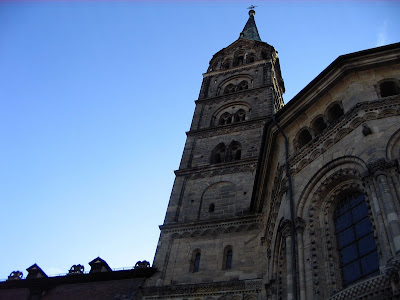 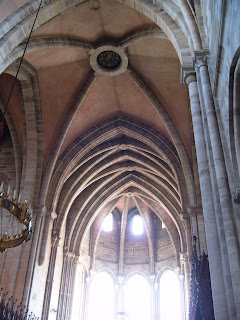 Posted by The Gingerbread Lady at 1:39 PM

You saved the best for last -- love the knockers. Thanks for all the pictures. Makes me want to visit.

I do love the knockers - they remind me of the two knockers in the movie Labrynth - only one had the ring in his ears... so one could not hear and the other could not speak *smiles*

Beautiful pictures, I love the one of the red rooves. And also ha, ha very punny to the first caption =P

Hello, I am new here and I was drawn to your Bavarian city pictures. Many moons ago I spent some amazing days in Nürnberg and Bamberg: I truly adore this region full of history and cultural riches.

Oh how I do love a good set of knockers

(sorry, I couldn't resist either! Thank you for the awesome post :) )

What a beautiful place! I hope to visit some day. Meanwhile, I am glad to get this virtual visit.

Wow! What a stunning place you live in. Those rooftops!

Hey Gingy..I Just read your comment on my blog about your relationship with your ipad..
It made me laugh. I love mine too...He makes me happy ....
He is fast, efficient, likes to browse, likes to shop, likes the same music as me, stays up late with me, ...what else could a girl want