The Bayeux Tapestry, Feminism and Me


This article (cough) in the Huffington Post gave me pause for thought. In a bad way. Actually, in an acid reflux kind of way. For those of you not keen on reading the article, allow me to give you a biassed synopsis (let's call it artistic licence. More about that to come.) Essentially, the (female) writer bemoans the state of the blogosphere as a reflection of the death of feminism. We women shouldn't be wasting our words on stuff like knitting (guilty) or cupcakes (guilty), but learning how to do "useful" (cough) stuff like shooting people and creating shelters for the zombie apocalypse. Basically: aspire to being a deranged male character from a Bruce Willis B-movie. Because this, it would seem, is equality. Not being women, but being women-trying-to-be-men in a way that most men would probably find alienating (i.e. if the  zombie apocalypse should come, do not rely on Mr Gingerbread for protection.)

In a strop of twisted-knickersery, the writer chirps: "we've lost that righteous indignation born of centuries of oppression. And take it from me, ladies, we're not fully equal yet." Gawsh. Such wise words from a woman whose previous journalistic contributions seem to primarily be in the sugary-pink world of female erotica (turgid nipples and tumescent members anyone?) and books about teenage witches. What saddens me about articles like this is the link they make to the Bayeux Tapestry in my head. Yes, my head looks like the inside of a bag of wool: there are lots of knots and tenuous links and a whole heap of yarn barf. Let me tell you about the Bayeux Tapestry and me...

The Bayeux Tapestry is a 68-metre-long (that's 224 feet, for those of you who like it Imperial) embroidered cloth that depicts events surrounding the Norman invasion of England. It's a very interesting piece on many levels and, in so far as one could feel pity for an inanimate object, I always felt sorry for it. See, it always seemed to be more famous for what it depicted than for its own artistic value. (It shows ... an army! Big horses! Lances, swords, shields! Knights! Kings! Men getting ready to beat the living daylights out of each other!) And this disrespect, I felt, was due to its medium. Had some old geezer painted it on a wall somewhere in the 11th century, it would be Art. But as it was made by a bunch of women, like, sitting around yacking and, like, sewing, it fell into the dirty ditch between Art and (snooty sniff) crafts. And thus, for a long time its value seemed to lie in what it portrayed (= Men Doing Stuff), not in its composition or rendering (= women doing stuff).

That's why articles like this by so-called feminists make me (and a lot of genuine feminists) feel very sad. It devalues someone's artistic output, based on their gender. If we're "closest to heaven in a garden," why shouldn't one blog about it? If the writer of that article had ever made a cupcake like this:

she'd be moved to bloggery. And, frankly, this is not "just crochet", this is My Art - and no less so because it's in a medium not typically espoused by men. And she can stuff it if she doesn't like it. Darned if I'm going to define myself by a handgun licence. 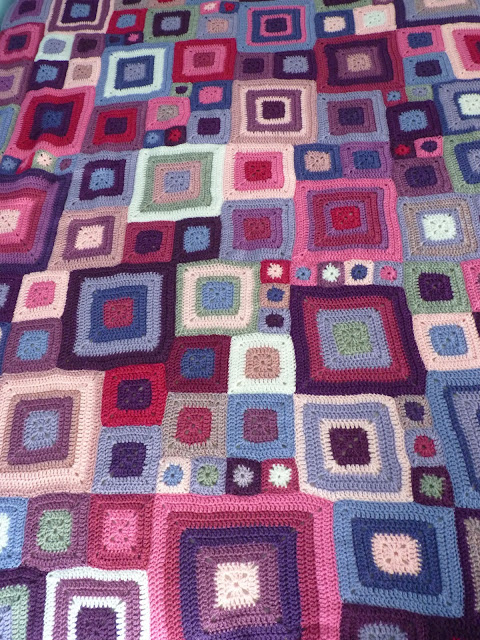 Essentially, I'm tough. I'm the main breadwinner in my home. I can tile a wall. I can lay a laminate floor. And I have five brothers, so I could probably take that missy down in one-to-one combat, if need be (though, of course, my scrapper days are over and I would rather not.) And I knit and crochet and make cupcakes - and I would garden if I had one and plants didn't wither under my fingers. That doesn't make me any less of a feminist, it makes me more of a capable and well-rounded person. Frankly, that's what I'm aiming to be.


And now, spleen vented, back to the crochet:
this is a Babette-inspired blanket. I just had a heap of scraps left over from my last Réalta, so I just crocheted squares of different sizes and sewed them on as I went along. The result was a monster blanket that showed no sign of ever being completed till, with an enormous effort of will and a lot of maths, I formed it into a rectangle and finished it off. Never, ever again.
P.S.: just started the next one
Posted by The Gingerbread Lady at 6:07 PM

Yay girl. Miffs me too, especially from women. (Blokes don't get it all that often). Not sure it is so cool to be proud of not being able to bake, sew, crochet, knit...seems odd. They are great skills to have to pass on down.
The Babette is great, you are very prolific.

I am totally with you, and I'm of the generation when women burned bras. I never did; thought it was silly, but I'm a tough war (II) baby who loves to knit, sew, dye yarn, crochet. And the writer of that article is an idiot!

Feminism gives us the right to be who we are, not male clones. Who the hell wants to be a guy, anyhow?

I'm so glad you posted this.

I love this post! Thank you for making my day (and for speaking my mind - only waaayyy more eloquently than I ever could).
PS: Do you think your sister could send me one of those cupcakes? I'm seriously craving one now.

Never never again and you just started the next one? Love it! You go girlfriend.

I am in line with EVERYthing you wrote. And I am unanimous in that and shout "Amen."

On the subject of that Tapestry - I remember seeing it in the flesh (as it were) when I was a child, and I was in complete awe at the scale of the project. How long it would have taken! It's incredible.

We have a scaled down replica of it in our town museum. It was made by local embroiderers and it is an incredible work. Even scaled down, it's massive.

That Huff Post blogger definitely struck a nerve - you're the second person to have blogged about it that I've read (and I'm certain there are lots more out there).

I am aligned with your sentimenets. I, however, will not diss the blogger - she's entitled to her opinion on the current state of feminism, even if I vehemently disagree with her myopic and limited view of what constitutes "bad-ass".

(having vented my spleen over at useless beauty already)

I agree wholeheartedly with your comments. The whole "equality" thing works both ways. Both men and women should take pride in their choices, whether they be traditional or non traditional, and no one should belittle another person's choices. Some people seem to have missed the point entirely, and it is a shame that there is still a long way to go before society is truly equal.

When those zombies attack I would like to think that I would be able to fend for myself without waiting for a man to save me!

Very wise venting - I agree. I gave up a career that I earned with my two masters degrees to be able to crochet, sew, cook, and home school my FIVE children. I also consider crochet my main form of art - I do dabble in painting and drawing as well.

I don't consider myself a "feminist" as such, because I essentially do see men and women as inherently different - while simultaneously being equal in value. I do agree that women are often undervalued, but feel no need to either degrade men, or to become a "man clone" in order to gain value.

Unfortunately, such narrow minded spewing as the author offered, does women another disservice.

I keep wondering if she was just spewing to get a reaction from women. Surely she knew there would be one. As a woman who remembers when girls "weren't allowed" to do everything they are now, I resent being told how I'm supposed to be.

And badass? Show me a woman who gets up every day and does what needs to be done and goes to bed and gets up and does it all over again and again and again. That's true badassery to me.

Gingy....I cant stand the Huffington Post. I am on your side on this one.
I, too, am the main bread winner, but i also can crochet a survival shelter ....if need be.
And ....I agree ...if one can whip up a cupcake or delightful looking crafty project....Ya damn well bettter blog about it....lol

You go girl!! I'm behind you...well next to you actually.

Choosing to take part in hobbies that were typically considered woman's WORK in the past shows just how far we've come.

However, I do agree that women are still not treated equally, which is glaringly obvious from the article that extends the belief that acting as a man is the standard, and all actions in opposition to that is less preferable. Really, let's not focus on our hobbies, instead, why not worry about equal pay for equal work, subsidized daycare (looking at you, North America) and other things that would make it easier for women to choose to how to live their life to the same extent that men do.

Brilliant! I read the Huff Post post and managed a fair bit of indignance myself. But no way could I have expressed the way it made me feel as eloquently as you have.

Rachelle...opportunities in North America.... arent ALL that bad for women. Remember...we have a lot of whiners here (US)that think life here is terrible....but I dont see them packing an over night bag to go live somewhere else

Hear!Hear! I agree with your views here. I was a single mother of two for many years (I'm still a mother just not so single anymore.) I am the main breadwinner in the family and can use a drill, weld, lay bricks and sew and cook. Now my kids are grown and I'm in my late 40's I choose not to do some stuff I don't enjoy so much anymore and spend the precious spare time I have doing stuff I enjoy most.