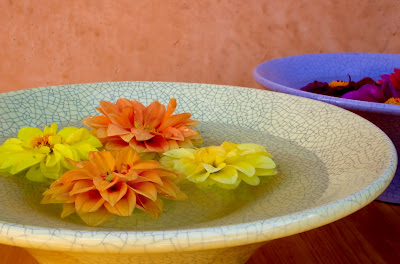 Now, as you all know, maths are not my strong point. Nor, for that matter, are the general sciences or things of an economic nature - you know, gold prices and stock markets and all of those percentages and little arrows going up and down. Yet during my visits home to Ireland in the years of the economic boom (the so-called Celtic Tiger), I found it odd - to say the least - that banks should be able to give young people in precarious employment 120% mortgages for overpriced houses. I found it odder still that people were actively encouraged by financial institutions and government agencies to spend rather than save, to accumulate debt and take on loans. I obviously don't have a fancy-schmanzy economics degree, but to me the outcome of such financial shenanigans was crystal clear: This Can Only End Badly. I had the same feeling many years ago when I watched one of my toddler siblings gaily wave a lollipop about his curly head - yes, m'dear, it's all fun and games till the lollipop gets stuck in your hair.

In Ireland, the proverbial lollipop has become firmly ensnarled in a fistful of hair. Like a lot of countries, Ireland is in dire financial straits, all the more critical because it has just come out of a decade and a half of vulgar economic excess. While all of the Gingerbreads are variously feeling the pinch and squeeze of the recession, none of them are - thank all things good and holy - as badly off as many. But the country is sagging under more than a recession, it's crippled by an economic depression. People stare, transfixed, - transfixed, I tell you - at a non-stop stream of news reports that show despairing financiers and scary graphics of plunging figures and lightning-strike arrows pointing down, down, down. Most of us don't even know what half the econo-jargon means. The entire country is hypnotised by despair and is paralysed by terror.

And I say this in my best Teacher Voice: quite frankly, it is just not on.

I met an old school friend last week, a friend who's still living in Ireland and recently lost her job as a support teacher for under-privileged children under the ironically-named National Recovery Plan. She said that she's just stopped looking at the news. "It's too much," she said. "This doom and gloom was making me sick with fear ... till I realised that my fretting over Wall Street is not going to make the situation any better. So I've decided to concentrate on changing what I can in my own little world, and take everything else as it comes."

She's right. This August I'm going to work hard, make nice things, write interesting(-ish) blog posts and do good deeds. From tomorrow on, I'm going to show you some luvverly photos of wonderful things in Ireland, share my latest projects, draw bizarre cartoons and, at the very least, make myself laugh.

And we'll take everything else as it comes.
Posted by The Gingerbread Lady at 5:38 PM

I'm so with you. I'm so depressed at the gloom and doom that I've stopped watching the news. It only makes me feel worst.

Now if we could get our beloved government (USA) to care about the people instead of their usual crap about politics and positions.... ah well, it's a nice hope. HAH!

Amen! 4 years ago when Mr. Obama took office and started spending like a fiend, i kept thinking...I'm no math wize, but even *I* know you can't spend your way out of debt. its almost as if they WANT us to fail.

I've seriously thought about stop watching the news but then again to not be informed is ignorant. Although how much of the media is truth these days. I'm so sick of the hype too. Everything has to be sensationalized! Our government needs to bring back jobs to the US from the rest of the countries, give corporations more tax credits to bring jobs back. That's the biggest start in the right direction. It's all so heart wrenching.

Yes I'm with you too. It's hideous. I don't normally get depressed at news stuff but this year has been rotten. My only consolation is at least we haven't got the Tea Party. (Sorry & sympathy to all your lovely USA readers).

And that is indeed a lovely photo.

Amen! Looking forward to your August posts. You always bring a smile to my face. Thanks!

What's that old UK saying? Keep calm and carry on. We've been in tougher spots than these, and I can't do much about the whole world but the little bit that surrounds me. Hug your kids, kiss your spouse, and knit good things.

I'm with your friend on this - I stopped watching the news ages ago for the same reason. These days I get my news filtered by facebook, which means I hear about the really big stories and stuff my friends think is interesting. Unfortunately, I can't hide from all the bad news - some of my friends are currently defending their property from rioters.

Bring on the lovely pictures of Ireland!