Every time I take a walk in town, I am beset by handsome youths in matching t-shirts, brandishing clipboards and glossy flyers with pictures of starving kiddies on them. With winsome smiles they try to appeal to my better side ("Aren't you touched by the plight of children infected with HIV in Sub-Saharan Africa?" "Aren't you appalled by experiments on innocent kittens?" "Don't you feel devastated by the destruction of the Amazonian Rainforests?") before trying to verbally strong-arm (practically an oxymoron, but roll with it) me into signing a direct debit for a monthly payment to the charity in question till I die.

Which is all very fine and well. Most of these charities do sterling work. They have the (wo)manpower and the resources and the political clout to Get Stuff Done - and obviously all of this has to be paid for somehow. However, I sometimes wonder how much of my hard-earned cash actually trickles down to little Nabirye's rice bowl after all of the t-shirts and glossy brochures and matching clipboards and spanky t-shirts and winsome youths have been paid for. Before anyone feels their underwear twitch in the first sparks of righteous rage ("The Gingerbread Lady is calling Doctors Without Borders a bunch of thieving rapscallions! She has besmirched the good name of the Red Cross! etc."), please note that I am not advocating a collective snapping of purse-clasps in the face of charity collectors, but simply saying that sometimes it's also nice to do something that makes you feel you have a more direct effect.

After my failed attempt to donate blankets to local charities (thank you very much), I have decided to stick to the two charities that I've worked for in the past. The first is a Christmas bazaar, organised by a colleague. She has a standing arrangement with the local hospital: we pay for the flights and transport of critically-ill children (and their families) from war-torn regions, the local Ronald MacDonald House puts them up and a team of nice medical staff operate on them and care for them during their stay here. All of the proceeds from our sale of work are turned into plane tickets and living costs for families from Afghanistan.

The second charity is far from home but close to my heart: it's called Compassionate Creations. It's a small charity run by a lady called Ann (an All-Round Good Egg), who makes and donates scarves to a local shelter for victims of sexual assault or abuse. I'm not a victim of any kind of abuse (and, no, we won't count chocolate deprivation), but I like the simplicity of the idea: it's just a token of solidarity, a gesture of compassion, a virtual hug from one anonymous person to another. I've never been in that position - but ... there for the grace of God go I: in another life, at another time, in another place I mightn't have been that lucky. So if even one of the scarves I've made over the years landed in the hands of a person who understood and appreciated that there was someone on the other side of an ocean who had  made it and thought, "I am so sorry for your pain," then it would be ... just fine. 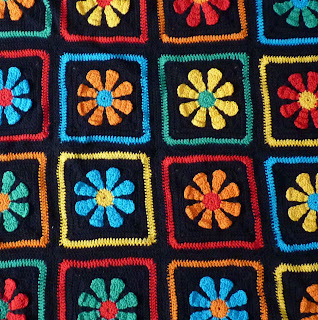 Thus my Plan of Action for August's Good Deeds: Krochet Krystal's daisy square pattern was given away for free - on the condition that its sale be for charity, so the proceeds from these blankets go towards yarn for Compassionate Creations. It's a win-win situation, I think. And just in case my do-goodery has sent you in a paroxysm of saccharine shock, do please note that the above plan also involves me buying *a lot of yarn* and crocheting *half-a-dozen scarves*, so it's more like a win-win-win situation. Smiles all round!
Posted by The Gingerbread Lady at 6:38 PM

Great post !! I'm hoping that p/hop will pick up the pattern I'm releasing shortly . One way or another all we makers of woolly things can maybe do just a little for those who could do with some win win of their own :D

You are so NOT going to believe this and I am so NOT making it up! But not only do I know Krystal and have spent time at her house...I ALSO know Ann!!! We've had lunch together at Cracker Barrel...It really is a small world and I am cracking up right now!!!