In Which The Brothers Gingerbread Depart

On Monday afternoon, we dropped the Gingerbread Bros off at the train station and sent them back to Ireland. I won't lie to you, it was an action-packed week: we brunched. We ambled around town and looked at things. William - a talented photographer - snapped pictures of interesting things I don't even notice any more. We watched innumerable episodes of popular sitcoms and quite a few films. I spent an evening, bewildered, in front of a Harry Potter film. I've never read the books, so the plot of the film was entirely lost on me:
"Oh, no! It's the mirabillus crocaeus spell that entranced Romularo in the Cavern of Dark Secrets! Harry, whatever shall we do?"
("What kind of a spell is that? What was the Cavern of Dark Secrets? Who's Romularo? What are they doing with that broom? Why's Alan Rickman dressed like he's going to a funeral? What's going on?")

One disadvantage of being around The Youf (Robert's 23, William's 21) is the sad realisation that Mr Gingerbread and I are getting old. We could've gone to the beer festival, but quite frankly, it was chilly and I'd already put on my slippers and Mr Gingerbread had a sniffle. This outbreak of wussieness was only underlined by the fact that at the grand ol' age of thirty-six, this excites me

much more than the prospect of having to down one of these:


Sensing a sorry lack in our general education (and, it was hinted more than once, a dire ignorance of what was Cool and In), Robert and William took it upon themselves to educate us in Popular Youf Culture. Whilst single-handedly updating the waiting world on their statuses via a variety of high-tech iGadgets, the Brother Gingerbread showed Mr Gingerbread and me a heap of YouTube videos to rescue us from our Fuddy-Duddiness. I am now au fait with Rebecca Black, The Lonely Island, Twitter and Angry Birds. In short: I rock once more.

On Monday, Mr G and I sat at home in our big, empty house and experienced premature Empty Nest Syndrome. Luckily, Robert had left us a little pile of coins on the coffee table as a memento of their stay. 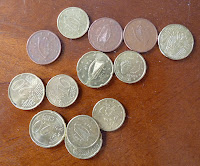 Posted by The Gingerbread Lady at 10:36 PM

ahhh...at 40 I am very lucky in that my 9 yr. and 5 yr. old think that I am a cool, hip, Rock and Roll mama. Course I give it only another 2 or 3 years before they realise that Mama is all roll and no rock.

Oh, Bri, that's all I can hope for now: a couple of kiddies that I can brainwash into thinking that I'm hip. Till then, I have to live with my lack of coolness or fake it when I can :-(

Coolness is only ever temporary. The nerds shall inherit the earth.

(Sour grapes from one who has never been cool in her life!)

Glad you had fun with the Gingerbros!

Will it be possible for me to post? Dubious on this end.

My own brother came home (many, many years ago) to "help" my parents. Mother said they were helped, alright. NOTHING was left in the cabinets or fridge!