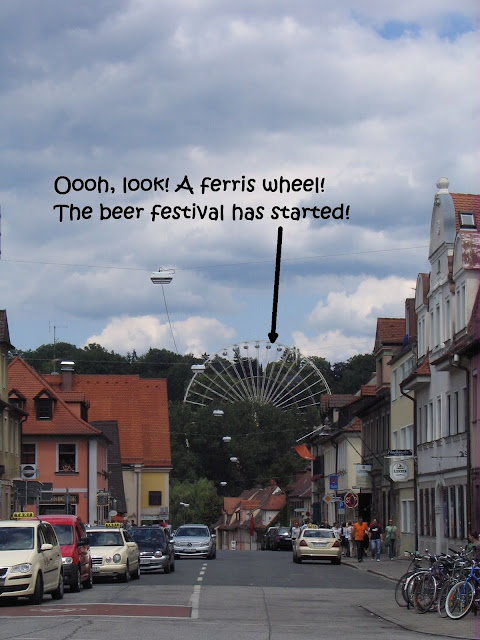 My mother has a tone of voice that would scare the bejabbers out of you. It seems that most mothers have this voice: they ring you with bad news and before the first syllable is fully formed, you know that something bad has happened. She rang me a few weeks ago and the conversation went like this:
"Gin - "
"What?" I shriek. "What happened? Is everyone okay? Is Daddy all right? Did something happen?"
"No," she continues in her tight, grim voice. "Your brother Robert wants to speak to you."
And I hear my brother's happy cackling in the background as she passes the phone to him.

That's when I found out that two of the five Gingerbread brothers were planning to come to Germany for our town's annual beer festival, they were staying for ten days, no need to make a fuss, I'd barely even notice them, they'd just come and go like wisps of smoke. And that's how it came to pass that last Saturday, Robert and William turned up with a suitcase full of chocolate and crisps (they pay rent in junk food) and since then chaos has reigned. Yes, they come and go but they also like Quality Time with the Gingerbreads. We chill out on the sofa bed, all four of us stretched out, watching a DVD. They eat like locusts - the silent, shark-like dedicated munching of young men in the prime of their lives.

For a start, they're not particularly big but somehow they appear to be so. There are shoes everywhere, which is astonishing because they only brought one pair each. Robert deposits little piles of loose change around the house, making me think of some bizarre mythical animal that leaves cash droppings. William is pathologically polite and makes requests in a very backward, solicitous manner. No longer used to the Irish style of beating around the bush, our conversations are very painful for all involved:
"Would you like something to eat, Will?"
"Only if you're having something, Gin."
"Well, I'm not hungry, but you can help yourself if you want something."
"Ah, no, it's okay. I won't have anything if you're not eating."
"I'm not hungry, but you can get something if you want it. That's no problem."
"Are you sure you don't mind?"
"Of course I don't mind."
"Because I don't mind not having anything if you're not having anything. I mean, I'm hungry but I won't, like, starve or anything."
"Just get something to eat, William, please."
"Are you sure, Gin? I don't want to eat anything that someone else might want."
And so on. 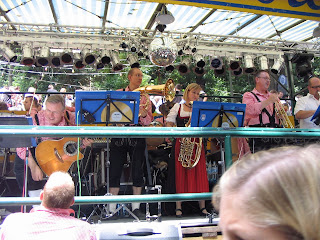 Tonight we have a night off. They've gone out with a friend who's also on holiday here and they're spending the evening at the local beer festival. They're both entranced and bewildered by a German Kirchweih (a beer festival that originated at the consecration of a church.) There are masses of young lasses in dirndls and young men in lederhosen. There's a big wheel - the biggest in Bavaria! - and merry-go-rounds and chair-o-planes and hurdy-gurdies of all description. Much jollity is had, singing along to brass bands, and beer is swilled out of 1-litre tankards. It has to be seen to be believed, quite honestly. 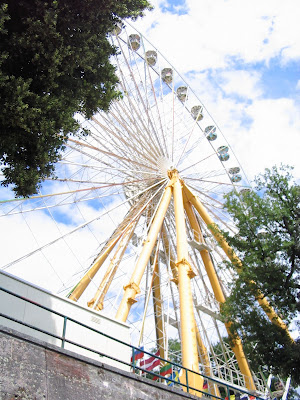 Posted by The Gingerbread Lady at 11:27 PM

What a lovely story, and wonderful photos. (And I hope your guests are gone soon so you can get some rest...ssshhhhh) I got to enjoy a little walk down memory lane thinking of all the beer fests we attended while in Kaiserslautern in the early 80's. You are so right...they have to be seen to be believed!

It all sounds good fun at yours he he !! xx

Ah! Finally I can comment directly! Anyway, love your description of your brothers as locusts, but aren't locusts noisy?

Living here in NYC we're a definite magnet for our daughter's college friends. Our rule is 2 nights stay over, max. How can you handle 10 days? Will you survive? Stay tuned...

Can I come too if I promise to leave my shoes at home? ;)

heeheehee...just think what it would be like if all 5 of the gingerbread brothers showed up to stay! And I envy you your festival...could use one of those right now...

Yes. The food situation. I USED to think it was an incredible amount of food (worms? boredom?) until my eldest son started eating like a starving waif too (and growing inches a day)
The ferris wheel makes me feel ill...!!!