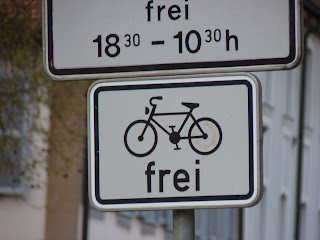 I live in a small university city in Bavaria, in southeast Germany. Our crime rate is embarrassingly low. Most crimes involve bicycles or students, or combinations of both: student-steals-bike, bike-stolen-from-student, student-run-over-by-bike, bike-run-over-by-student etc. The local police force seems to spend a lot of time cruising in their green-and-white police cars, desperately looking for crimes to solve. Sometimes, out of pity, I deliberately loiter and try to exude mischief and/or criminal intent, just to give them something to scowl at. Sadly, with my purple duffelcoat and satchel, I do not pose much of a threat. Occasionally a squad car might slow and I'll see a police officer peer hopefully out the window, but when they realise that I'm not about to spray graffiti or steal some child's pocket money, they keep going.

Things are changing in Gingerbreadtown, though. I feel we are veering into a full-scale crime bonanza. On Sunday afternoon, Mr G. and I meandered over to the Botanical Gardens. It was there that we noted with horror that some fiendish gang of horticultural bozos had had their wicked way in the greenhouses and had stolen not one, but three plants! The staff of the Botanical Gardens had decided to go with vigilante justice and marked the scene of the crime with reproachful little signs saying 'stolen!'  (with an exclamation mark. Take that, you dirty scoundrels!)

If that were not bad enough, this morning I was very nearly the witness of another dastardly crime involving local flora. I was cycling to work and spotted two police cars parked outside a house near our school. Three police officers were holding an earnest conversation on the footpath. Naturally, I slowed to gawk and spotted two more police officers at the scene of the crime itself. One was interviewing the house owner, the other was taking photos. Agog, I slowed till I almost fell off the bike.

Guess what had happened? Brace yourselves, readers, because this next bit is going to be gruesome:
A tree had fallen over.
Or maybe - maybe it had been pushed.
Uh-huh.
A fence was very nearly damaged.
Yes, indeedy.
Five policemen and one policewomen had rushed to the scene of the crime to take notes and photos (with sirens blazing, I hope - but I missed that bit.)

WHAT IS THE WORLD COMING TO? At this point, I am seriously considering moving to a more stable environment, like Johannesburg or Mexico City. I fear for my life. Will my bike fall victim to thievery? Will someone stomp on the daffodils outside our front door? I quake at the thought.

Naturally, I have become more cautious and now I'm seeing the world in a different light: 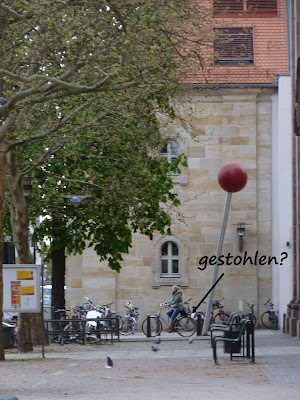 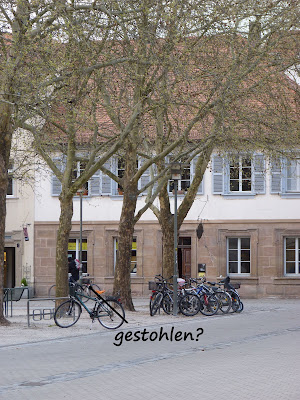 Things will never be the same again.
Posted by The Gingerbread Lady at 9:47 PM

ohh my those poor plants XD

I KNOW! They're probably being held hostage somewhere. Uh-huh. Evil on the rampage, I tell you.

I'm amazed you are still able to sleep at night! You're not safe in your beds! :)

hmmmm...a mystery ...indeed.
In the meantime, in the good ole U.S. They have found 10 bodies buries in the sand dunes by NYC, and another woman tried to off her family by locking everyone in the car and driving off a bridge.
ahhhh....crime ....such a given here.

Keep a close eye on those daffodils. I've heard they disappear after a few weeks until next year.

Haha! This is so funny. I spent most of my high-school years living in a very similar town; the police would pull anyone over when they got the chance, sheerly out of boredom and "suspicion."

One time we had a homeless lady (I don't know how she was homeless in such a small town) sitting outside our local movie theater, and when she acted strangely, we called the police. No less than 6 squad cars showed up, with police running up in a hurry to nab her! It was very amusing to those of us working the concessions. ;)

I don't know what your movie preferences are, but your story really reminds me of "Hot Fuzz," which you should try if you like British comedy and haven't seen it before.

I would love to live where you live. If only everywhere in the world had crime like your wonderful heaven on earth it would be a much, much happier place.

*lol*
Beware, I am about to steal your blog!
GESTOHLEN! :D

You'd be much safer in Honduras. Or Juarez. For sure. Run away! They can't catch you, your the Gingerbread woMan!

Funniest comment ever! That's a keeper! I love it when Google Translate fails :-))

I think the police should start working undercover to get to the bottom of this plant escapade. Then the townspeople can help to bury them up to their necks in soil (strategically spaced in the botanical garden, of course). That would keep them police occupied ...

Just curious but why is that other comment funny? (the German one) Doesn't it mean 'so boring. Ugly crochet also' - that's what babel fish and google both said. Yes I did just go and check it out. Obviously the grammar may be wrong - speaking only English and not any German myself I wouldn't know. Not nice maybe but funny? Please share. I would love to know why.
Janey B

Cactus? They stole cactus? Look for suspicious people, eyes darting back and forth, grimacing in pain, with boo-boos on their hands. Follow the trail of band-aid wrappers.

Hi there, Just discovered you're in Bavaria! Though we live in the Pacific NW, USA, my husband is Bavarian! Moved to US at 30yo. He's from Pleystein http://en.wikipedia.org/wiki/Pleystein
We travel there 1-2x per year, I just love it there and your story about the "crime spree" rings so true!

This was such a funny post! At least you have police around. I live in a small place and with budget cuts here I don't often see a police car. (We still have a bit of snow but our neighbours were in the backyard with their grill!)