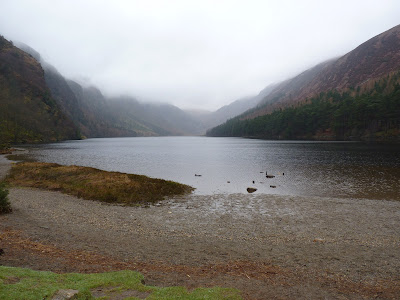 On Sunday, the pater familias and I decided to Get Culture. And, after a huge family reunion that involved obscene quantities of food, we thought it mightn't be a bad idea to Get Exercise and Get Fresh Air as well. So we headed off to Glendalough.

Glendalough - which means the valley of the two lakes - is an ancient monastic settlement in east of Ireland, not far from where we live. This 6th century monastic settlement is nestled in the valley that is now the Wicklow National Park. And although it was a foggy, cold Sunday morning in March, there were hundreds of walkers and tourists out and about. Not only Irish people, but also several dozen blue-lipped southern Europeans and brightly-clad Germans and Dutch, revelling in The Nature. For my father, the most fascinating of all was the young Asian man who was wearing an interesting pair of pants with the crotch situated at knee-level.
"Do you think he knows that his trousers are falling down?" asked my father, concerned.
"I think they're supposed to be like that," said I - fashion expert that I am.
My father was astounded. Gobsmacked, in fact.
"He wants to look like that on purpose?" he said. "Those trousers are deliberate?"
I had to break it to him gently that they were indeed a fashion statement and not just a very unfortunate sartorial oopsie.

With the patience of a preying mantis, I waited till they'd wandered off to the side to get you, dear readers, a selection of tourist-free photos: 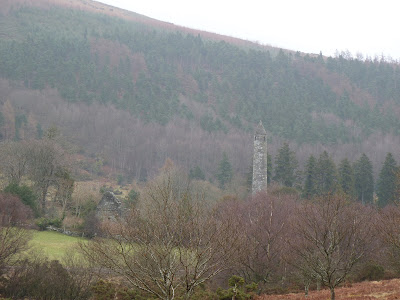 Posted by The Gingerbread Lady at 7:43 PM

How beautiful! Thank you for a glimpse into your world.

Thank you for the lovely photos of The Nature. Added bonus--history and archaeology, too, and green, green, green. Lovely.

Thank you, ladies! I was lucky to commandeer the computer for ten minutes today to upload my photos. When I visit my parents I have to get in line to use the computer - and there's usually a brother huffing and puffing over my shoulder as I do it ("You'd better not be writing about us!") It's not very conducive to good bloggery.
Anyway, best wishes to you all from chilly Ireland. Apparently there's more snow on the way and I've been blamed - I brought it with me from Bavaria, you see...

I wish I could come see the lakes in person. How lovely it is!

You too probably have that one place that you have just been dying to see your entire life and for me it is Ireland. To take this little walk with you has filled my soul with that desire again. I hope you will take us on another walk again soon.