Adventures in Ireland - Part I

Well, after twelve hours of travelling, I'm back in the Gingerbread House with my husband. He'd even vacuumed. The man is truly a gem.

Those of you who read this post will probably begin to suspect that whenever I travel, disaster follows. If I were very narcissitic - or slightly paranoid - I would start to become concerned that my desire to fly unleashes some natural catastrophe, this time the earthquake in Japan, subsequent tsunami and the reactor meltdown. I not only feel very sad and quite shell-shocked about the whole situation (I can't watch any more news reports - too distressing), I also have lingering feelings of responsibility. I think I'll stay put for a while.

To take our minds off terrible things, let me tell you what I got up to in Ireland:

I've Got a New Baby Niece
Baby Erica arrived on Pancake Tuesday, my brother and sister-in-law's first child. Naturally, much rejoicing was had, and Mammy and Daddy Gingerbread even decided to brave a trip to Dublin to see the new baby - and I got to go along. This might not seem much to you, but it involved major trauma for the Gingerbreads. My parents do not like to travel. Anywhere. And although Dublin is only an hour away, getting from the depths of the countryside (where they live) to Holles Street Hospital in Dublin city centre is no less stressful than a shuttle launch.

Needless to say, we got lost. Dublin is devoid of road signage, which had a significant role in this development, but let's just say that it came as no surprise to any of the car's occupants that we ended up driving in circles. My parents' forty-year relationship teetered on the brink of destruction as snippy comments flew back and forth across the gearstick divide about someone's driving skills and someone else's navigational talent. Finally, I was sent to ask a taxi driver for directions.

When I returned, my brother was on the phone, frantic. The visiting hour was ticking by and no relatives had yet turned up to admire the fruit of his loins. I tried to give my father the taxi driver's directions, but these were intercepted by my mother, who was trying to simultaneously calm the new father and calm my father - and trying to amplify the instructions for my father, who suffers bouts of selective deafness when concentrating on the road:

But we finally found the hospital, which was tucked away in a busy side street, and gathered around the cot to admire the little sprog. She was passed around like a swaddled parcel and declared to be perfect. 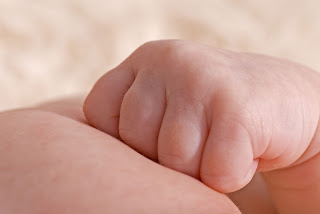 Posted by The Gingerbread Lady at 12:27 AM

If that is her tiny little fist, then she is, indeed perfect. And has lovely wee hands. — Glad you and the Gingerbread Husband are safe but isn't it horrible about Japan?

It is AWFUL. The pictures are mesmerising, in the worst possible way. They actually make my stomach turn. I've had to stop watching the news because it's just too distressing to process ... AND I LIVE ON THE OTHER SIDE OF THE WORLD. God only knows how those poor people can cope.

I was like that with Hurricane Katrina. You must understand that we have no TV service but happened to be out of state at my parents' where we saw tons of footage. Then we got into the car for hundreds of miles, and I finally had to ask my husband to please, turn the radio off. I couldn't take any more of it.

But think how the poor Japanese are overwhelmed? Much more than the rest of us far away...

Congratulations on your new niece. They are amazing, aren't they? I am the proud auntie of 4 nieces and nephews, but was always very happy to hand them back after I got them chock-full of sweets and yummies Mommy wouldn't let them have. It's an auntie's duty.