Mrs Gingerbread vs The Customs Office (1:0)

RAoK stands for Random Act of Kindness - and it is, as the name suggests, simply a nice deed that you do for a random stranger, with no other intention or purpose other than to squirt some goodness into the universe. This week I was the recipient of a RAoK from Shelley in California. She sent me Big American Yarn in gorgeous colours, as well as crochet hooks and Kool Aid, jelly beans ... and, best of all, a lovely letter. That's right - a real letter, a handwritten letter, a funny and interesting letter that we read in the car and then re-read at home. It was like Christmas Day again  (but better because my Christmas Day this year mainly revolved around disinfecting the toilet after my stomach-flued husband had had his evil way with it.) It was such a lovely and kind gesture, I was really touched - I just can't tell you how it brightened my day ... my whole week, in fact. 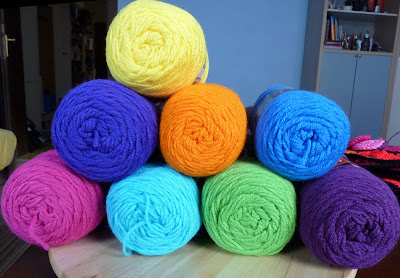 Yesterday afternoon, Mr Gingerbread and I set off to Battle With The German Customs Office because my parcel had been - shock, horror! - impounded. The cheek! This meant we had to drive out to an industrial estate where the customs office (an eerily quiet building full of people sitting at desks behind glass windows, staring at their hands or computer screens) is located. Many German bureaucrats have the amazing ability to make you feel guilty without you having done anything wrong. It's a marvellous piece of psychological manipulation, especially for obsessively law-abiding citizens like myself. I'm slowly beginning to suspect that this skill is part of their training course - they might even have final exams in Glaring 101, How to Narrow Your Eyes Evilly and Snorting in Disbelief: Masterclass. ("Once again, Heinz, but with feeling! I want to to inject even more incredulity into that snort! Sneer, if you can! That's right! Excellent!") Whereas in other countries you are assumed innocent till proven guilty, some German bureaucrats like to simply presume you're guilty and they have you do the work of proving your innocence.

When I went entered the parcel office, the three officials were slouched at their desk, glued to their computer screens. I handed over the notification and one of them s-l-o-w-l-y went off to get the box. He dumped it on the counter and handed me a scissors.
"Please open it!" he barked.
So I did. I unpacked the Kool Aid ("Look, Kool Aid!" I said to him. Not impressed) and the crochet hooks ("Wow, crochet hooks!" Still no flicker.) And the jelly beans. ("Oooh, jelly beans! Would you like one?" Narrowed eyes.) And the yarn - then his beady little bureaucratic eyes lit up. He picked one up and gave it a squeeze to make sure there was nothing inside.
"Is there any medication in the box?" he said hopefully. "Foodstuffs? Meat? Dairy products?"
I tipped it over so he could look inside. Nothing.
But he wasn't finished yet: we had a little argy-bargy about the price of the yarn, but he finally accepted that the German government was not going to turn a profit in 2011 on the basis of the customs fees on my meagre and inadvertent yarn-smuggling activity. Clearly disappointed that his day had not been livened up by the discovery of a kilo of cocaine hidden in Red Heart Super Saver, I was allowed to take my present home.

Where I unpacked it on the coffee table, took a quick photo in the last ten minutes of bright light, then left my goodies there so I could admire my present all evening. Look at my pyramid of yarn: isn't it just lovely? I can't wait to rip the labels off (carefully) and get started on something really cool.
Posted by The Gingerbread Lady at 5:34 PM

While I'm sure Red Heart is fine and dandy, has anyone ever sent you any Caron Simply Soft? If so, which do you prefer? I recently found Red Heart Soft, which was a lot better than I expected it to be (as a sheepishly self-admitted yarn snob), especially for a sweater for a toddler.

I'm just curious about the Caron. It's my new favorite go-to for crocheted baby blankets, is all.

Ha, ha, the Customs Office! So true!!! And even if they do not assume that you are guilty of something since you show up there on a regular basis, it still feels like they consider you to be a "disturber". :D

That Shelley is a sweetheart, and partly because she is the genesis of another fun blog entry. Enjoy your goodies, and may the evil eye not get you!

I'm so envious of all of that colour! And of your blanket in the previous post.

When my son was a baby we visited my sister (can't remember if she was living in England or Canada at the time) and we accidently left some things behind. So she mailed them to us and I got a notice from customs about the books we had bought from overseas. I told them that I hadn't bought anything that the box should just contain forgotten things from our trip. I didn't hear from them again but when we got the box, it obviously had been opened. Maybe the used cloth diaper, etc. proved that I had been telling the truth!

Gorgeous yarn, and I love your commentary on the customs officers! As a mom I could use some of those classes for inducing guilt in my kids lol.

what a lovely gift and great random acts of kindness.

That Shelley really is a sweetheart, and I had a good laugh about your description of the customs officer. I should take a class in that guilt inducing stuff!

Love your story and it sounds (and looks) like you received a wonderful gift! Have a great day! :-)

What is the World coming to?

That is an absolutely marvelous victory!!! Love that you tried to kill ze postal verker vith kindness, even offering him a jellybean. Hahahah (narrowed eyes)

And what a wonderful box full of treats. You received some lovely colors - how great is Shelley??

I have used RHSS a good bit, and some colors can be a bit scratchier than others right out of the skein (not sure if it has to do with the dye)... but it really does soften up with washing and tumble-drying, and lasts forever.

And this has nothing whatsoever to do with yarn, the postal service or anything else, but here is a funny Mitchell & Webb clip that I thought you might appreciate. :-)

What a nice box of fun! Loved your story of picking up and opening your box for the authorities. hee-hee.