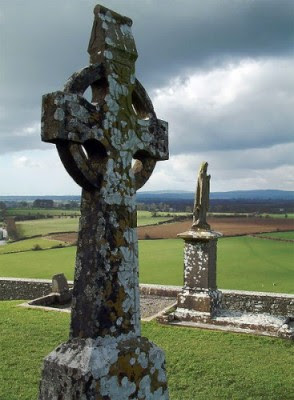 As you probably know by now, I come from Ireland. Not the romantic, rolling-hills-and wee-small-walls part in the west of Ireland, but rather the flat bit in the east called Kildare, best suited to growing crops and, um, racehorses. In our part of Ireland we do not speak the with the kind of accent that garners the usual plethora of admiring adjectives from foreigners: our accent is not "melodious", "musical" or "lilting". Goodness, no - at a pinch it could be described as "flat". In fact, to make matters worse, a decade abroad educating Germany's Youth has even polished off the worst excesses of my accent: I no longer differentiate between you singular and plural (whereas in Ireland we do: you and ye, yiz or youse, depending on where youse come from), I now use the Present Perfect (I've just combed my hair) instead of our luvverly Irish Past-Present Continuous (I'm after combing my hair) and - shriek! - I can pronounce my th. In fact, I was once introduced to a little brother's friends as
"- the one who lives in Germany, you know, the one who talks posh," ("Poshly," I corrected automatically. My siblings really hate me.)

But over here in Germany, I have discovered a curious thing: I can recognise a Celt at fifty paces. Be they Scottish, Welsh or Irish, I know we probably share DNA before they even open their mouths. I work in a multicultural environment, yet the Welsh, Scots and Irish still gravitate towards one another. What is it, I wonder, apart from a shared compulsion to sing at every public gathering? That, and the persistent desire to dress inadequately in inclement weather (I mean, come on: kilts. Really? Wearing a skirt with no underwear on a windy day - i.e. 360 out of 365 - in the mountains of northern Europe? Oh, please!)

Aside from everything else, I can speak normally (or spake narmal, as we'd say in Kildare) when I'm with my fellow Celts. I can start sentences with "Yerra ..." and no one bats an eyelid. In fact, I can utter complete sentences that consist of nothing but "Yerra ... " and they are seen as significant philosophical contributions to the discourse:
"And that was the point when I told him never to darken my door again! The rat!"
"Yerra..." (shrugs).
That says it all.

This is one of the reasons why I volunteered to do some of the telephone enquiries about our school's proposed trip to Scotland. I get to talk to ladies in offices in Scotland and chitchat about the weather whilst noting down ferry timetables and group discounts for students. It's very relaxing - after a day of speaking German, I get to chat with my fellow Celts. I can unleash my repressed Irish accent and let it all hang out.
Or so I thought.
Just last week I had a lovely chat with a lady called Betty near John o'Groats. I wanted to know how long the ferry to Orkney would take.
"Howarya," I said (= standard form of address in Kildare), "My name is Gingerbread Lady and I'm phoning youse from Germany because we're after planning a school trip to Scotland and, yerra, sure and amn't I just finalising the details." (Well, not quite - but you get the idea.)
Betty trilled in delight - more so when I told her that there were fifty of us. She tapped away on her computer and gave the sailing times and the price and we chatted about how dreadful the winter was and I was so happy to be able to talk to this lovely little old lady (or aul wan, as we'd say in Kildare). After a couple of minutes of small-talk, I thanked her and said I'd send an email to confirm.
"Wail," she said, "It's bin vairrry nice talkin to yui."
"Yerra, thanks a million Betty for all your help," I said, "Sure and aren't you a star?"
She paused and then said in a confidential voice:
"And I rrrreally must say: yuir English is vairy, vairy guid!"
Readers, I was momentarily stunned: she didn't know I was Irish! And then devastated: she didn't know I was Irish! And then complimented: my English is vairy, vairy guid! So I bit my lip and, not wanting to embarrass her, thanked her kindly and hung up.

Have I been here that long? I wondered. Am I beginning to sound like a German? Am I losing my accent - and my identity? Will this mean that I, too, will start wearing thermal underwear in winter and develop a yearning for The Nature? Who am I? What am I?
I can only imagine that later that day, Betty and the other girls were hanging around the water cooler or coffee maker or haggis dispenser, or whatever it is one has in Scottish offices, and she probably told them about me:
"I had a phonecall today from a lovely wee Gairman girrl - and aparrt from the fact that she had a vairy odd accent, her English was actually vairy guid!"
Thanks a bloody million for the identity crisis, Betty. I hope you choke on your shortbread.


Photo courtesy of www.acobox.com
Posted by The Gingerbread Lady at 10:56 PM

I really should know better by now than to try to eat or drink anything while I'm reading your blog! Ah well, my computer screen needed a good scrubbing anyways!

Have a great weekend!

Oh, poor Gingerbread Lady! To be mistaken for a German when you're obviously, obviously IRISH. How could Betty do it? — Delightful, as always!

Haha! I'm sure she was just psychologically prepared to speak with a German, and couldn't hear anything differently because that was what she'd been anticipating. ;oD

I am about 75% Scots-Irish, and PROUD of it!! My mother's grandfather on her mother's side came from Ireland to America, and her grandmother on her father's side did as well. We are a family of Murphys (yes I know, typical!), McNieces, Craigs and O' Neils! :D

I would SO love to visit Ireland one day, but I don't know that I will ever be able to afford it. I envy you for being an Ireland-born Irishwoman!

P.S. I married into a German family as well, my name was Craig, now I'm a Seifert. Darn. ;P

I had at least one line of ancestors (this is three or four generations back) named Laugherty, so I suppose that makes me at least part Irish. But I've spent my life in the US and Canada. People from Canada say, "You must be an American; you say 'you-all.'" (This was a rub-off from some American Southerners I used to know well, years ago.) Here in the US, people say, "You must be a Canadian. You say 'eh?' at the end of sentences." One simply cannot win.

But I was chatting with a stranger not long ago, and she asked what my ethnic background was. I figured she was picking up on the Canadian overtones (here in the southern Appalachian Mountains, they're more noticeable) and asked, "What are you hearing?" She said, "I'm not sure. Maybe Scandinavian?" Hmmm...

Tee hee! Just found your blog yesterday and am having a rare good time reading it. Not a Celt by birth,I'm just a fan. Fan enough to have been in the place pictured above and the ones mentioned in the post. Just did that John O Groates to Orkney trip last June.

I know this is an old post but it gave me a laugh. I've only moved from Dublin (yes, a jackeen from the "yiz" and "jaysus" school of speech) to Galway and my accent causes no end of hilarity. When I go to see the clan in Dublin they nearly lose consiousness laughing at my "culchie" accent, however round here they snigger whenever i say certain words (hurley, sparkle and party seem to be the funniest)because of my Dub accent. Oddly enough, when introduced to people for the first time they generally enquire as to what part of Sligo I hail from. Sigh. Arra and yerra indeed.