My sister-in-law got engaged at Christmas, so I thought I'd make them a Moorish Mosaic Afghan. I haven't seen their new apartment yet, I just know that she has a dark red sofa so I chose a dark red as the main colour: 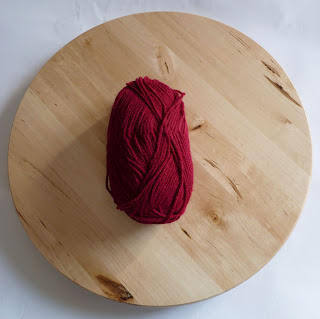 Now all I have to do is find a colour palette. If it were for me, I'd throw half-a-dozen skeins of yarn into one of my hundred craft baskets and off I'd go ... but it's rather difficult to try and second-guess someone else's taste. So I just kept mixing and matching colours: 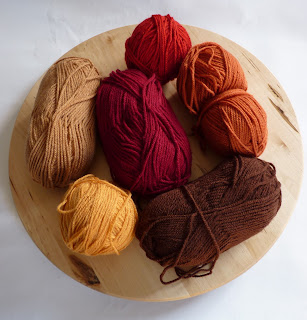 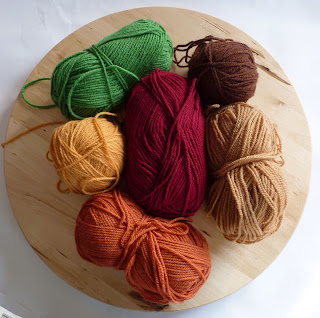 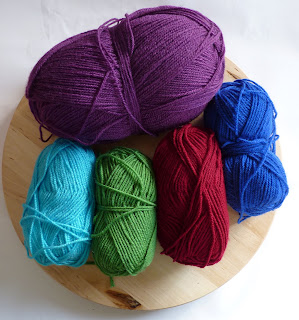 The whole process was watched sceptically by Mr Gingerbread, who was putting up a lamp while I was doing it. He was dragged over to give his opinion, which he did unwillingly. ("I can't imagine what the blanket is going to look like based on just five colours!" "Just tell me if your sister will like these five colours!" "I don't know! This is very stressful! Leave me alone!") He finally picked the first group of colours and skipped off happily, thinking he'd been let off the hook. Haha! Little does he know that I've found five more colours that also might work, so he has to go through the whole process again tomorrow.
Posted by The Gingerbread Lady at 9:25 PM

What an amazing gift it will be! I like colour choice #2 : )

Wow, that will be so beautiful! I really like the last group of colors you put together. :) About how long do you estimate it will take you to make the afghan? I know that it would probably take me a long, long time, just because I'd lose interest after a while. ;)

To be honest, I don't really know how long it will take - probably better not to think about it! I'd like to adjust the pattern a bit because I don't like the way that some of the octagons have large blocks of colour and others don't, so I think I'll spread the colours more evenly.
If I start and find that I like it, I'll crochet obsessively till it's done and then I'll have got it out of my system :-))

Uhmmm... you can't just ask your sister-in-law what she would like?

Naah. That would be too easy! :-))
No, I'd prefer it to be surprise so there's no pressure. I can experiment with the pattern to my heart's content and at my own pace - and if I like the result, she'll get it. If I tell her, I'd have to justify why it isn't finished yet every time I met her.

Well I am sure that however long it takes you, it will turn out just beautifully! I wish I had such a sister-in-law to make me such an afghan; yours is very lucky! ;) I can't wait to see pictures once you've finished. Have fun crocheting! :)

Never one to mind my own business, I vote for option no. 2. I think you need the green in there to liven things up a bit. And some navy blue. You're welcome! :)