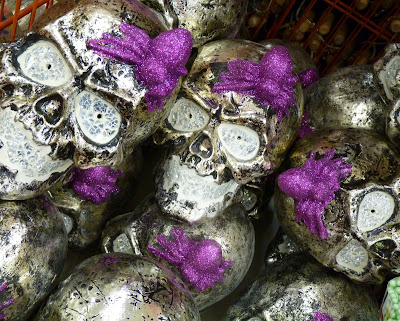 These, um, heads are to be found in the home décor section of a local store. My mind boggles. I don't know much about interior decoration but I'm at a loss as to see how these, eh, things could be incorporated into most people's surroundings. Elton John's living room at Hallowe'en, perhaps, but nothing else springs to mind. I was thinking of asking my Gingerbread Sister if she'd care for this as table decorations at her upcoming wedding - when was the last time you were at a wedding with a centrepiece of a metallic skull with sparkly mosaic eyes and a purple spider on its forehead? Talk about a conversation starter, eh? Complete strangers would be bonding in minutes!

Anyway, I restrained myself from buying 2 dozen for the upcoming nuptials and I left the store quickly (and yes, those eyes do follow you). Outside I was immediately confronted with another, ah, object: 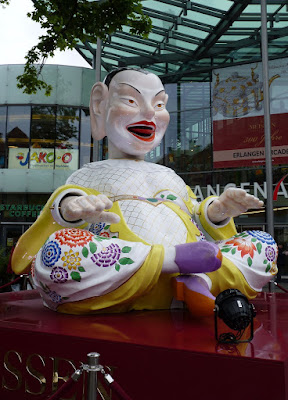 It's hard to tell from the photo, but this is a four-metre high, head-wagging, painted porcellain ... well, I don't know quite what it is. The bystanders around me variously referred to it as a 'giant baby' or a 'painted Buddha', but either term insults babies or Buddha. I loitered for a couple of minutes, hoping to take a picture with someone in it, so you'd get a good idea of how darned big it is - but people were giving it a wide berth, as though the were afraid it'd hop up and come after them, wagging red tongue and all.


Thank you, by the way, to my dear friends and family, who've attempted to contribute to my blog by volunteering all manner of stories that they feel I should share with cyberspace. Alas, many of these stories somehow involve underwear, so you'll have to wait a while till I tidy them up for the general public. My mother gently hinted that while she has endured the crochet patterns, she'd much prefer reading something more generally entertaining. The hint has been taken, mother.
Posted by The Gingerbread Lady at 4:41 PM

Perhaps the skulls are for Dia de los Muertos celebrations... in Mexico... thousands of kilometers from Germany...