This has been another busy week - we're going home to Ireland at the end of the week to visit the Irish Gingerbreads. My mother has a vigorous schedule of activities planned, including a trip to the west of Ireland. My poor husband has been in the clutches bosom of the Gingerbread family for nearly a decade and hasn't left the eastern province of Leinster yet. There's always too much happening at my parents' house to go a-touristing. This time, however, we are going to hop into a car with my parents and whizz off to the Atlantic coast to show him the Ireland he has thus far only seen on postcards. He's very excited.

In the meantime, I thought I'd post a picture of my latest finished object, blowing merrily in the breeze on the roof patio. There are 81 squares in this blanket. Eighty-one. Eight-oh. And this follows hot on the heels of the 99-square Equalizer I finished a week ago, swearing loudly that I was never going to make a flipping motif afghan ever again. Clearly, Pavlov's dog had the ability to learn more quickly than I did - perhaps the next time I decide to make a sew-together-extravaganza, someone should ring a bell and the rivers of slobber on my fingers might remind me of those ends, that sewing. 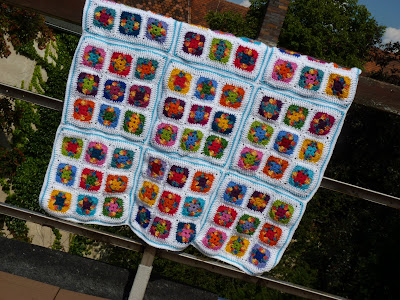 Oops, too late. Have already started the next one.
Posted by The Gingerbread Lady at 10:26 PM

love your turn of phrase, girl!
laughed out loud at your stories, back along in the blog, esp, the little biddy, the saga of the pigeons, the story of the zero gravity, and not to mention the gorgeous crochet you do!
i recognise the trait in husbands of asking these questions, i've given up answering them, as the answers will usually make themselves know to the asker with time. In other words, my reaction is 'do not borrow my brain, use yoour own!'
enjoy Ireland and the Wesht! and bring a raincoat or two, it's drizzly here at best, torrential betimes....

lol, ah if only the squares could join themselves. Although I'm surprised this and the equalizer bothered you and not your realta. squares are very easy to sew,just straight across, unlike putting together my realta, around this way, then that way...
A very pretty blanket though, would make a nice one for a child.

Love it, it has come out beautiful.

It's like having a baby -- as soon as it's all done you forget the labor pains and stupidly get yourself in the same situation all over again. LOL But hey, your baby is beautiful!

There you go with the mathz again! The afghan is lovely, as usual.