So you're looking at this and thinking, "Haw haw! A hot water bottle? How old is the Gingerbread Lady? Ninety?"
You laugh now, readers, but buy yourself a hot water bottle (if you don't already have one - or, like me, two) and I will have the last laugh. Oh, yessirree. You will rediscover love, a love like none you have ever known before. And because you're a crafter, you ought to wrap your new-found beloved in a warm, woolly cover. And that's what we're going to do today.

First of all, what yarn shall we use?
Well, you all know that I'm a big fan of sock yarn (despite having never knit a sock in my life) and this would be ideal for such a project - it's normally superwash wool. Perfect. Unfortunately, it'd take you forever and a day to do it in sock yarn and in the meantime, your little tootsies will be blue with the cold. So I've used acrylics (the one featured in this tutorial is Caron Simply Soft) and a wool/acrylic mix. Some people are afraid that acrylic might melt - well, this hasn't been the case with me so far and I like a HOT hot water bottle.

First, take your hot water bottle (to be hence referred to as the HWB) and chain till your starting chain is the length of the body of the HWB: 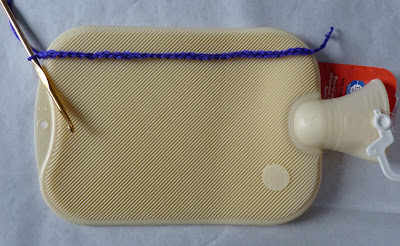 Now do a HDC (American = half double crochet) [HTR (British = half treble crochet)] in each chain.
Let's take a moment to extol the virtues of the HDC.

If you're a beginner, you mightn't know this stitch, it's kind of halfway between a single [Br = double] crochet and a double [Br = treble] crochet stitch. It's really fantastic for one great reason: it allows you to make a ribbed effect, like a knitted rib effect. In fact, I've done scarves in this stitch with a chunky wool and have given them to knitters - who didn't realise it was crochet! (And, being knitters, they didn't realise that I had crocheted it in about a third of the time it would take them to knit it, evil chuckle.)

This is a HDC [HTR]:
Begin as you would for a DC [TR]: yarn over, hook through stitch in the row below, yarn over, draw through. 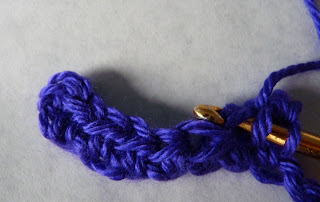 You now have three loops on the chain. 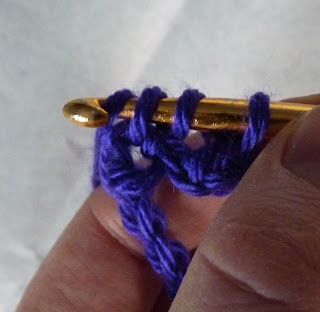 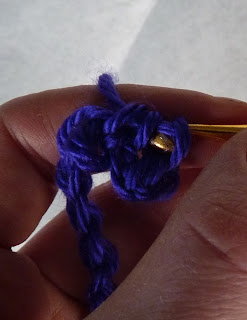 When you have done a few stitches in your first row, look closely at your stitches: 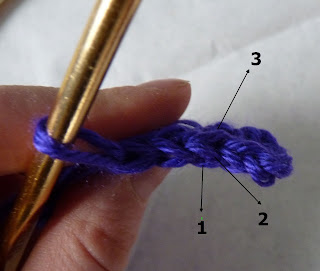 There are three loops visible, aren't there? Well, when you come to the end of your row and turn your work, you can create a ribbed effect by crocheting through the two back loops of your work. In other words, I would crochet the next row through loops 2 and 3 and ignore the loop # 1 at the front (for a very pronounced rib, you crochet only through the very back loop, loop #3, leaving loops # 1 and 2 to jut out at the front.)

Anyway, you do a HDC [HTR] in every stitch in your foundation chain, when you get to the end of the row, turn, do 1 chain a HDC [HTR] in the back two loops of the last HDC [HTR] in the previous row. You just crochet back and forth, till you have a long rectangle that covers the HWB when you fold it in two. Then grab a sewing needle and sew it in: 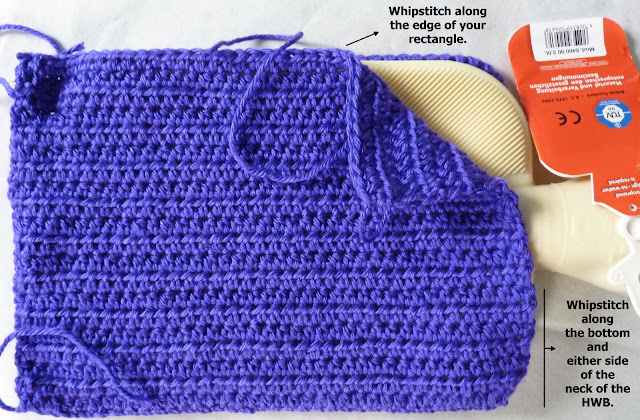 I remove the HWB and turn my work inside out so you can't see the sewn edges. The other nice thing about the HDC [HTR] is that it doesn't produce a 'front' and 'back' side to your work.

And there you go! 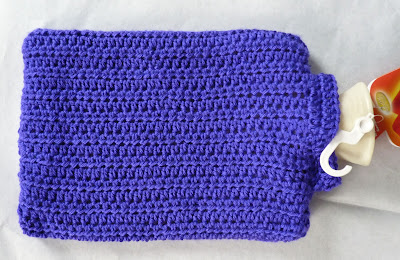 Posted by The Gingerbread Lady at 4:55 PM

How awesome is this? It's getting slightly cold here in Canada so we've started with the hot water bottles. Now I don't have to look at my mistake of a Cinderella bottle! Yay! Grown up bottle cover here I come!

Oooohh... Another HWB fan! Hurray!
While rubbing your feet in Cinderella's face does sound slightly tempting, a woolly cover is so much nicer (and keeps the bottle warm for longer.)

I live in the Pacific NW in Washington State, and I grew up using a hot water bottle (and I'm only 23)! :) The only problem is, I can't seem to find one to purchase in stores anymore! I guess the more popular option is an electric heating pad, but it just isn't the same. Once I find a HWB, I will have to try your pattern! :)

I love hot water bottles, and this tutorial is sooooo good, you may even have managed to teach me to crochet too!!!!!
wow!!!
off to see have you more tutorials on crochet....tiptoe....
liz

I have been searching for a simple hot water bottle cover to crochet. Not only have I found a pattern but I get free crochet lessons as well. Many thanks as I haven't picked up a crochet hook in years. This will keep me nice and cosy as we travel around western Queensland for a month in July. Thank you.

Hello Lyn,
Thank you for stopping by and leaving a comment. I hope we've managed to seduce back into the world of crochet - be aware, though, that it's very addictive and I can't take the blame if you get (ahem) hooked :-)

This is lovely - I'll be shopping for a HWB very soon to make my poor ugly troll feel stay warm in the winter.

I wonder if you could leave the bottom open, and stitch on buttons or large round beads to fasten it closed instead? I guess I'll have to try it both ways when I buy my bottle and answer my own question! :)

This looks really good just one question on the second row and following rowss do you crochet in loops 2 and 3 in every stitch or just in the first one then go back to all 3? Sorry if this is obvious I'm new to crocheting :)