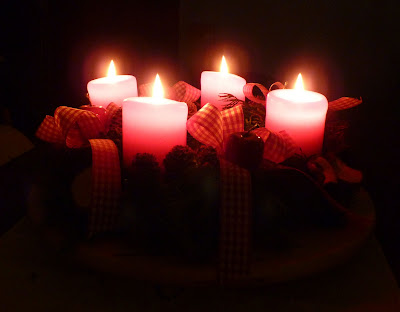 Hello everyone - and a very merry Christmas to all who celebrate it!
Our Christmas has been very adventurous and unexpected so far. We had a horrid week - just horrible. Heavy snow meant that we had to get up at dawn to clear snow, then I had to trudge-slash-slip-slash-slither to work in snow and ice, teach in wet clothes, turn around and trudge-slash-slip-slash-slither home in the early darkness of midwinter. Our washing machine broke down. My keyring - with all of my keys - was lost-slash-stolen, and I spent all of Wednesday walking from shop to shop in sleet and rain, trying to retrace my steps from the previous day, hoping that some kind soul had handed them in. On Thursday morning, yesterday, I got up early, worked, came home, threw my (actually, our) stuff into two suitcases and we flew out the door to the train, on our way to Ireland for Christmas, leaving behind a filthy house and a dishwasher stacked full of dirty dishes. Oh, the stress. The sickening stress.

None of this was made any easier by the fact that Ireland is under cover of snow. Dublin airport had been closed for days due to heavy snow but reopened yesterday. However, shortly after we arrived in Frankfurt, Ireland's airport authorities closed the airport again due to unexpectedly heavy snow. Our flight to Dublin was cancelled and thus we found ourselves stranded at Frankfurt airport at 11 p.m.

I'll spare you the gory details of being herded through Frankfurt's vast terminal with two or three hundred other frazzled strandees, the endless queuing, or the confusion, just let me tell you that the nice people at Lufthansa put us up for the night and offered to put on a special flight this morning, Christmas Eve, to Dublin. I mean, they offered it, but due to a forecasted blizzard, they couldn't actually guarantee that it was going to take off. The chances were 50-50 that we'd actually get to Dublin. And if we didn't, the chances of getting back to Gingerbreadtown were almost null - nothing much happens after lunchtime on Christmas Eve in Germany, so we had the choice of chancing it and hoping we wouldn't end up spending Christmas snowed into Frankfurt airport's Sheraton Hotel, or just giving up and going home. And at that point, exhausted, sweaty and defeated, we just wanted to go home. Home, home, home. So we got up early this morning and took a train home to the Gingerbread House. 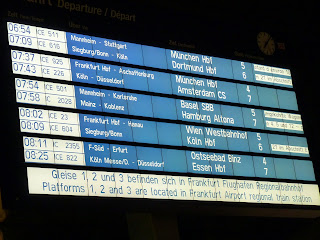 Under normal circumstances, I would have been devastated. And, truth be told, I am disappointed not to be at home in the bosom of my family. But the reports online about travelling conditions in Ireland make scary reading - I'm glad that the Gingerbread Brother and his Lady Wife didn't have to make the hair-raising journey to Dublin to pick us up. I'm glad we didn't end up on a flight that was diverted, like the Lufthansa flight to Dublin before ours (it was diverted to Manchester. Can you imagine being nearly home - very nearly - but stuck far away enough to know you've no chance of making it for Christmas?) And I'm very glad that we had time to get to a supermarket to re-stock the fridge that we'd so diligently emptied (the horrors of this week were compounded by my husband's insistence that we eat all the leftovers in the fridge before we leave. It's hard to cope with stress on a diet of scrambled eggs and pickles.) So now we're in the Gingerbread House, sitting in the reflected light of candles and Christmas oleander, listening to Christmas music and watching the snow drift past the window. It's our first Christmas in our house. And, all things considered, we're very lucky.

In Ireland there's a tradition of lighting a candle and placing it in the window on Christmas Eve. As a nod to the Holy Family who found no room at the inn, it's supposed to show travellers that they'd be welcome to find shelter in your home on Christmas Eve. When you drive through the pitch-dark Irish countryside on Christmas Eve, you can pick out the light of the candles in people's front windows - a beautiful tradition, a lovely symbol.  This evening I lit four candles and put them in our window, thinking of all the people who travelled across rough seas, snowy skies and icy roads to get to their loved ones. And a small token gesture for all the people stranded at airports and ferry docks, spending a Christmas of sorts on a camp-bed or in a hotel room. 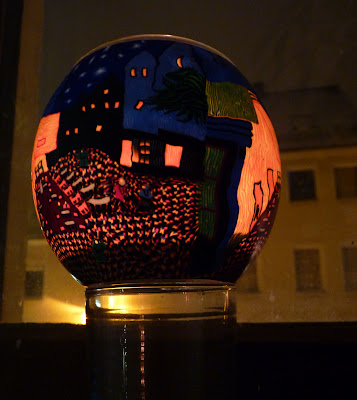 Posted by The Gingerbread Lady at 6:32 PM

I was thinking of you whilst reading the news yesterday, and am relieved to hear that the Gingerbread Lady and Gentleman are safely home! The groceries are a bonus ;)

Have a lovely holiday, snugged in and surrounded by love.