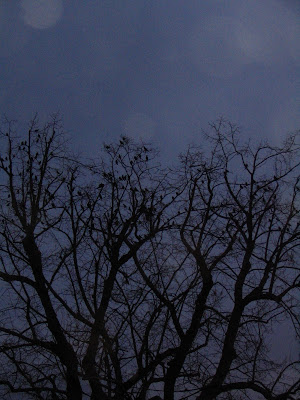 Twittering.
Nowadays it's better known as the compulsive desire to let the world know what you're up to on a minute-to-minute basis, but remember the good ol' days when twittering was the domain of birds, not politicians, popstars and people with a life that's apparently so exciting, they have to chronicle it, blow by blow?

We're in the middle of a massive twitter attack right now because - tada - the migratory birds are back. This, our first spring in our new-old gingerbread house, has brought many surprises - not least the fact that the big tree behind our house is the meeting place for (what seems like) the entire local bird population. We hear them chirping late at night, long after the sun has gone down. In fact, they're still twittering long after midnight. In the darkness!
Yes, honest!

And the first sound we hear in the morning is the sounds of manic twittering at 6 a.m. Do birds ever sleep, we wonder? Do they twitter in shifts? Maybe there's an avaian trade union? 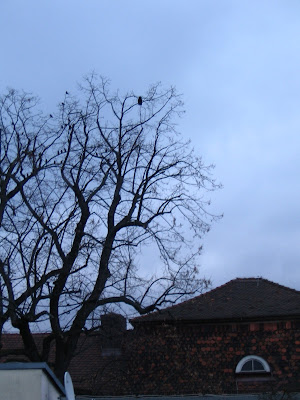 ("Okay, lads, we'll take the late shift if you take the early one. I reckon we can keep going till close to one a.m., if we all pull our weight. We'll give the neighbourhood a couple of hours of sleep, then you guys hit 'em with the dawn chorus."
"Right, boss!"
"Sounds good!")


Here are the culprits. It looks slightly grim, doesn't it? There are Hitchcockian echoes, I'm sure. If I were paranoid, I'd go so far as to suspect that they were plotting something.
Posted by The Gingerbread Lady at 7:56 PM

Lol - I always think of the movie "The Birds" when I go outside and there's tons of birds around.