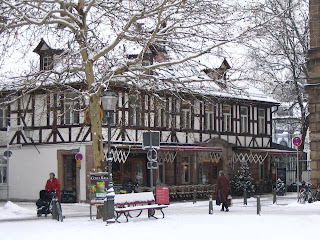 It's amazing how a little bit of snow really spruces the place up...
Of course, snow is best admired through a pane of glass, preferably while sitting under a woolly blanket on a comfy sofa, with a hot water bottle at your stockinged feet. But in the interests of bloggery, I decided to brave the cold and take a few snaps. I know the house above really does look like a gingerbread house, but unfortunately it's not mine. It's a cafe that also sports a particularly fine bakery, yum, yum. I waited for ages to take a photo without passers-by, but as soon as I produced a camera, pedestrians popped out of nowhere. I loitered for a bit, but after watching the agonisingly slow progress of an old lady with a zimmerframe moving with grim determination (and at a snail's pace) past the cafe, I finally gave up and took my picture. I managed to include the other old lady who walked in a slow circle in front of the cafe. Either she was waiting for someone, or she's got a worse sense of direction than I do. In any case, she's been immortalised on my blog.

Recently I've been getting up at 6:30 a.m. (eek!) to shovel the snow from the footpath in front of our house. This is mandatory for all house and property owners in Germany, and there are strict guidelines that say it has to be done before 7 a.m. Or else. Because my accident-prone Gingerbread Husband is recovering from pneumonia (the things he'll do to get off work), the important task of Snow Shovelling has fallen to me, the gingerbread wifey.

Normally, the a.m. is not my friend. I am not a fan of the hours before 10, but I've become quite fond of my early-morning shovelling. The world is startlingly quiet: you know the expression a blanket of snow? Well, it really applies: it seems the snow muffles the normal sounds of the city. It's quiet and light and pristine clean, the air is icy and sharp. I run the big snow shovel through the powdery snow and make patterns and swirls before I clear it all away. I see how much snow I can shove in front of me before the pile on my shovel topples. Sometimes I even have an audience: two little children live on the top floor of the house opposite ours, and they've been watching me with great interest. Unfortunately, children don't come with a volume control and their crystal-clear, ringing voices can be heard all over the street:

"Mummy! LOOK at that woman dressed in the FUNNY clothes!"
...lots of hushing, and a hand pops into view and drags the child away from the window. But seconds later, the tousled-haired little kiddie is back.

"MUMMY! What's she doing with the SHOVEL?"
...a pink-faced mother appears at the window and individual words drift downwards with the snowflakes: rude - shouting - snow - pathway - clear. The child disappears from the window frame, but returns a few minutes later with a sibling. They're both still in their jammies - it is very early, after all - and they watch me spread the grit on the path outside our house. This evokes much excitement:

Their mother reappears at the window and pulls them away. She gives me an apologetic wave and closes the window.

I guess it's our very own pre-teen neighbourhood watch :-)

And just to show you how pretty everything looks (and you will note that not everyone has cleared their pathways, tsk, tsk), here's a picture of our local church: 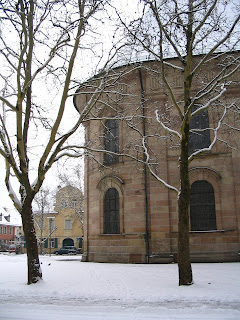 Posted by The Gingerbread Lady at 12:12 AM

Hi! I just had to come catch up after you made me laugh my head off - oops, I mean sympathize - about being stalked by Brad Pitt!

These pictures are breathtaking! I have always wanted to travel, and now I'll have to move Bavaria right up on my priorities list!