I'm a nut magnet. Nutty people love me.
It's not - as we say in Ireland - off the ground that I licked it. My mother is a nut magnet par excellence, she's the Pied Piper of the Needy, Insane and Broken-hearted. My father will grumble that she gives off eejit vibes, attracting every nutcase in the county with her compulsive politeness, kind-heartedness and inability to just say No. And her children all have it, to a certain extent. Some more than others: as her blog will attest, my little sister Emily is brimming with bonhomie and she exudes good-natured eejitry. My sister Eithne has the ability to create a tow-tide of madness in her wake, managing to attract The Crazy without even trying.

'Course, I have it, too. But I tend slightly more towards my father's side - and he prefers people in small doses, as do I (which is ironic, because I have a very social job. I'm an introvert trapped in an extrovert's career) but despite my anti-social tendencies, I still attract my share of very strange people.

Let's look at exhibit A.
This was posted through my letterbox on Sunday. It reads - and I quote verbatim - 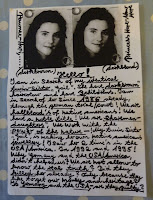 Hello!
I am in search of my identical twin-sister "Gail". She have darkbrown haircolour and have 3 childrens. Iam in search of her since 1986 already, through the german trial/court! We are halfblood's of native americans! We have a noble title! We are "sharemen-daughters". We work with the power of the nature! My twin sister "Gail" is making her own native americans jewellery! I saw her 2 time's in the USA/America. In 1992 and 1995! Why Germany and the USA/America didn't helped us? We are not allow to know the real truth? Did they killed her already? Only because they like to get our money and heritage? Is Germany and the USA - are they guilty?

Mr Gingerbread and I were - and still are - perplexed. The top of the page boasts two photos of the same woman, one is marked Princess Hope (darkbrown) and Princess New Hope (darkblond). Aha! It's not the exact same photo, oh no. They're identical twins!!! The note is handwritten in English (we're in Germany) and if one were not already questioning the sanity of the writer, the plethora of exclamation marks and underlining of random words seems to push you to a certain conclusion. At first we thought it was some sort of elaborate swindle, to be followed up by Princess New Hope looking for money to find the long-lost "Gail", but no such appeal came. She didn't drop by to heal us with the power of the nature and her shareman (presumably shaman) abilities.

More's the pity. My plants could do with a wee raindance.

Sadly, I think that Princess New Hope is simply a person suffering from a persecution complex, with a sprinkling of paranoia thrown in, to boot. This saddens me, actually, to think about what kind of mental torture this poor soul is going through - to feel the need to plaster the neighbourhood (we later found more of them in the neighbourhood) with flyers whose message is almost incomprehensible in its madness.

On a more positive note: we started feeding Baby Gingerbread some solids. He loves it - so much so, that he will lean forward and eat the bowl if the food is not shovelled into him fast enough. See the fear in his eyes? He thinks this might be his last meal. Ever. 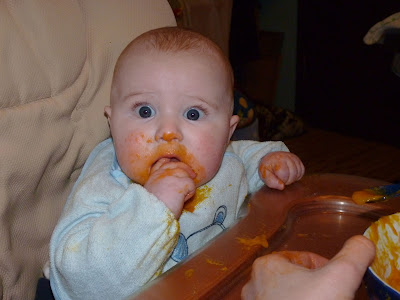 We'll work on the table manners next.


And when I'm not brandishing a spoon, trying to get some puréed carrots into my child's greedy mouth, I'm crocheting. I need lots and lots of hexagons before I can figure out how to put them together. There is yarn everywhere. Ever.Y.where. It's a testament to the love of my husband that he doesn't complain when he removes a skein of brown yarn from the baby's cot before he puts him down. This is a man who has made his peace with life with an addict.

Posted by The Gingerbread Lady at 9:52 PM

What a handsome young man! And the afghan looks gorgeous, so far. You have such a great eye for color. You must have inherited that from your dad, as well.

That is hilarious, I hope she finds her twin sister Hope (or was it New Hope?)!
And I think we have the same slippers. Thanks for giving me another giggle!

I seem to get my fair share of crazies. Unfortunately most of them are related in some way or another.

What do you mean I collect crazies?! What? Me?!

Love the colours... The Little Man will have outstandingly good fun with all manner of beautifully coloured crochet pieces once he gets going... I have regularly had to fish "works of art" out of the bin and the toilet thanks to our Sweet Delight :)

And I thought, I was a nut magnet ...
*lol* That facial expression of the gb baby is priceless! :D

The hexagons are BEAUTIFUL!! The baby is Handsome!! I love the red hair.

Can't wait to hear about your first trip to Ikea when your limpet is a toddler. Ha ha welcome to the wonderful world of being a (cranky) parent. ;-D x