There's a thin line between lunacy and lucidity. Most people sit on one side or the other, others wobble down the middle, occasionally tipping to one side. My 85-year-old great-uncle Joe riverdances down this line, high-kicking on either side when the fancy takes him.
Is he eccentric, you say?
Is he what?
One day, when visiting my parents, he pulled my father aside.
"Listen!" he hissed and pointed out the window. "Listen to those pigeons: 'Cooooo! Coo!'"
My father made a listening face but he couldn't hear much through the double-glazing.
"It's that blasted MI6!" he growled. "They're spying on me again. Those pigeons are just decoys - they're bugging devices, they're tapping me!"
They didn't have to tap him - he's already tapped ... in the head, that is. My father didn't even try to explain why the British secret service really didn't need to go to the bother of installing remote-controlled robo-pigeons with listening devices in the trees outside our home. There wasn't a van hidden behind a hedge somewhere with three or four British agents taking frantic notes about Uncle Joe's dinner conversation. Her Majesty's Secret Service is not interested in hearing about his trip to Capri. If my father had even hinted at any of the above, Joe's eyes would narrow suspiciously, and he'd make his exit as quick as a flash, suspecting that the pigeons had already got to my father.

Despite the fact that his movements are being tracked by feathered vermin, he is brimming with (physical) good health and appears dapper and smart to anyone outside the family. We have just had to come to terms with the fact that while other elderly people have a touch of gout or arthritis, Uncle Joe has a touch of a persecution complex. The MI6 might be on his case, but it hasn't stopped him travelling the world. He literally - and I'm using literally correctly here, as opposed to any empty word for emphasis - walks into Dublin Airport, walks up to a ticket desk, buys a ticket to, say, Spain and ... flies there. He doesn't speak a word of Spanish - or any other language apart from (Dublin) English. And when the foreigners don't understand the elderly bald man in the three-piece suit, he just speaks more loudly. Even more loudly, that is. The MI6 don't actually need the pigeons at all, as he can be heard at a significant distance. My parents have a small pile of postcards from different destinations around the world: Jamaica (he felt like a cruise, so he went to the Carribean), Lourdes (nothing like an aul prayer now and again), Capri (he loves Italy) and, if memory serves me correctly, the Florida Everglades (don't ask.)

And when he's not travelling the world with multiple intelligence agencies on his heels, he goes shopping. Not in shops, oh no. He likes markets - flea markets, second-hand markets,  auctions and estate sales. We're pretty sure that he regularly gets fleeced - unbeknownst to himself. He triumphantly brings his purchases to our house, where he distributes them bountifully. Sadly, there are too many Gingerbreads for him to keep track of our ages or stages in life, so the presents are often wildly inappropriate. We've received close to a dozen second-hand lambskin coats, countless pieces of jewellery - real jewels mixed in with plastic-and-paste pieces - toys of every description and every state of disarray. A variety of electrical and mechanical equipment that either does not work or is long obsolete. As soon as he has left, they're gathered up and disposed of tactfully. I can't count the number of times I've arrived home in Ireland and spotted something bizarre - a CD player without a laser, a gold medallion with an anchor on it, a coffee machine without a glass carafe - lying around. I only need to point and ask, "Uncle Joe?"
"Of course!" 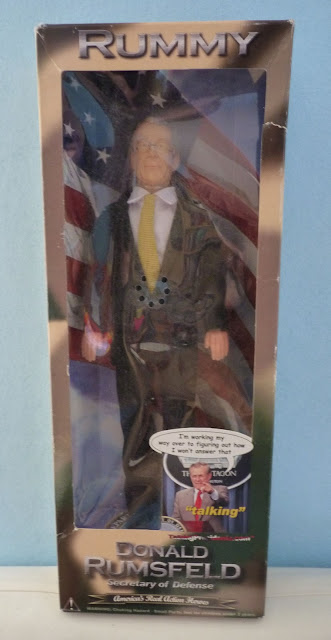 Hence Rummy, a Donald Rumsfeld talking doll.
I think he thought this was some kind of Barbie-esque action figure - maybe Barbie's new Sugar Daddy. Maybe Barbie had an internship in the White House and Rummy took her under his wing. Maybe Barbie and Rummy enjoyed a brief but passionate affair in the heat of war. So many possibilities! But none of the Barbie-playing target audience (my nieces) wanted an action figure of an old guy in a suit, so my mother gave it to my husband at Christmas.

I cannot tell you how happy this made Mr Gingerbread. We couldn't take the doll back after Christmas - we had no room in our cases for action figures, no, sorry - so I took pity on Mr G and brought him back his action figure after this trip. Every time he picks it up, he laughs.

Now the doll sits in its box on his desk and its beady little eyes follow me around. I fear I've opened the floodgates: before long, the house will be full of Uncle Joe's mad bargains. We'll be tripping over broken chess sets and African statues made-in-China.

Oh well. At least now I know why that pigeon has built her nest in the tree outside our front window.
Posted by The Gingerbread Lady at 2:17 PM

I love your Uncle Joe!

Oh this has made me laugh and brightened a dull, cold and snowy Monday. Thank you - have you thought abot writing a book?!