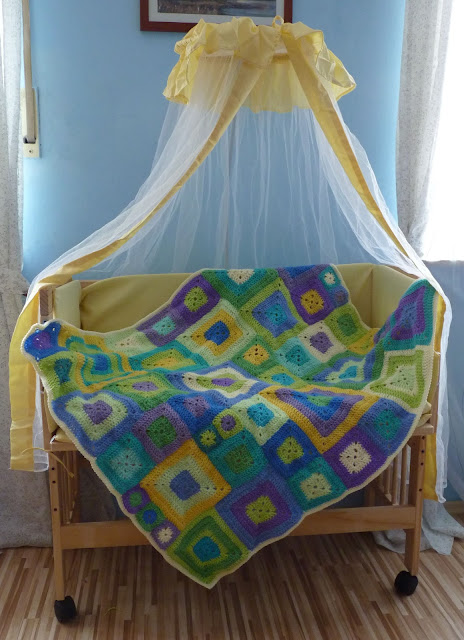 This one was made to use up odd skeins of yarn. I'm still working on my daisy afghan but needed a change from white and yellow - so I grabbed all the bits and pieces that I had, and started making a random collection of squares. Now all I need is a recipient!
Posted by The Gingerbread Lady at 10:06 PM

I so love your colourful blankets, I really have to make one, sooner or later! Best wishes for your pregnancy, it's always fun and sweet to read your posts! :-)

You are hilarious, and oddly enough, this is exactly how I feel and I am only 7 months along. Although this is my second I completely understand and sympathize with you. Hang in there you are almost done!

Just joking - but I love your blankets.

Your post is hilarious - friend of mine kind of confided in me that she is so over being pregnant in the heat waves and felt she could tell me only as all her other family/friends would feel like she is a weird person for not liking being pregnant. She's an amazing mom already but I love that she is also honest that sometimes she loves to have her quiet time and wants to swap places with me for a long weekend ha-ha.

The blanket is beautiful! And I've never heard pregnancy described like that! But it makes sense...

I am sure a recipient will come to mind eventually!!!lol. It is a beautiful blanket and has inspired me to start one also.... seeing as i am having a sorting spree through all of my yarns it is the perfect opportunity to put selected yarns into a separate basket... ready to start...one day soon i am sure...I do mean the soon!!!

I think the trick may be not to stop the car in the first place ... not that I've taken my own advice, I've let the passenger call the shots four times now.

Ha ha I know how you feel, one of my hitchikers spent the last three months with his foot crushing my bladder which meant I was constantly needing to pee, especially when I laid flat!!!! LOL. Your blanket is gorgeous, do I sense alot of creative energy! x

Mild stomach punching is likely to be remembered fondly when he/she gets his/her driver's license in 16 years (or whatever the driving age is in Germany). May it be an on-time and swift delivery. None of the two-weeks late nonsense my sister's two kids decided by which to extend their womb vacations. That was yesterday, it seems like; yet one will be 22 in a few weeks (Aug. 30, around your due date, I think).

My mother declared that I kicked her down onto the sidewalk once, before my illustrious entry into the sunlight. She decided she was having a small goat instead of a child.

I love this one - REALLY pretty odds & ends.

Love the blanket and the hitchhiker analogy. It's Perfect!