My husband is a big man. And he likes to look at stuff. And he makes contemplative noises while he does so: "Hmmmm. Ummmm. Ehhmmmmm." Despite the fact that he's well over six foot tall, he likes to lurk behind my shoulder and look at what I'm doing - not saying anything, just hmmmmmming. He's very good at lurking - he can effectively block a doorway, hovering between two rooms, dipping in and out of various conversations.
"You're blocking my light," I'll snap.
He blocks my light constantly - and I don't mean in the metaphorical sense, but in the physical where's-the-nearest-source-of-light-so-I-can-plonk-myself-in-front-of-it sense. It drives me bonkers.

So my recent decision to take stock of my cottons afforded me the opportunity to arrange my bright skeins according to colour - so pretty, look at the colours, aren't they nice? - was something that clearly interested him enough to hover nearby and hum. While I was positioning myself over the cotton, camera in hand, waiting for a ray of sunshine to light up the table,  the dark shadow appeared behind me.
"Hmmmmmmmmm."
"Get out of my light, please!"
(side-steps. And blocks light from another angle.)
"Hmmmmmmmmm."
"Get out of my light!"
Minimal movement just outside of my peripheral vision.
"Please! My light!"
And as suddenly as he appeared, my shadow-husband disappeared and I could take my photo. 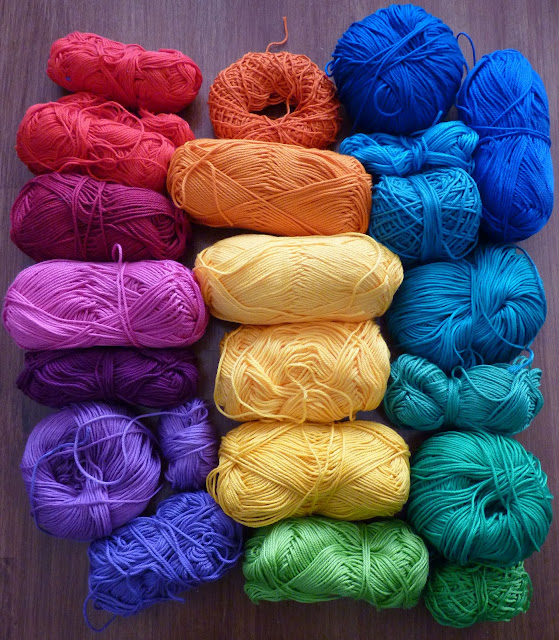 God grant me patience.
Posted by The Gingerbread Lady at 7:27 PM

I love all those colours together, have you any plans for them?

A long Hmmmmmm is a bit of an in joke in my family just now, sort of an 'it's not rocket surgery' suggestion that there was a far easier/better way of doing a thing that the hmmmmmmer is not going to trouble you with. My husband is from your husband's side of the English Channel ... maybe they're distantly related ;D

Thank you for the afternoon giggle. Were you eavesdropping at my house? ~Kelly

Bless you! I am not alone!

Just LOL! Oh and MEN! They don't get it do they, love your yarn, very, very pretty.

What a funny humming husband you have :-)
This made me laugh a lot

We have that same conversation. I almost hate to hear the words "what are you doing?" or "why are you doing that that way?"

I cured my husband of that sort of thing by asking him if he would like to learn to crochet or knit....his answer was, "NO!" and my reply to him was, "then please allow me to do this in peace because that is how I relax!" One time he asked me why I was ripping out rows and rows of ripple crochet, I told him it was because there was a mistake 6 rows back and I couldn't continue until I corrected it, he said he would leave the mistake in, that no one would notice....oh yes they would, first off, I KNEW it was there, and secondly anyone knows that a mistake in a ripple will throw the pattern off....some days I can do without his advice, and I sure don't like the chatter when I am trying to count. Men, God love them, the only reason I don't strangle him at times is because I don't think they allow sharp objects like crochet hooks and knitting needles in prison, LOL.
Susanne :)

Oh, my goodness! It's so nice to know I'm not alone! On the other hand, a cold hand of fear has just clutched my heart - maybe we're all married to one and the same man? :-O

You make me laugh...