Sock It To Me

My efforts to declutter continue, hampered primarily by my husband's need to keep everything Just In Case. His grandparents were pre-war children, his parents were post-war children, my husband was born in the affluence of 1970s Germany - but he has the pack-rat instincts of someone on rations. Yesterday, while rummaging in the wardrobe for clean bed linen (an adventure in itself - I'm almost afraid to lean in too far, in case I topple over and end up in Narnia), I found a bag of odd socks, which my husband had clearly hidden for cleaning emergencies.
Awwww, you say. Isn't he thrifty? What a good husband!
No. No, he's not.
This is third such bag of orphan socks and abandoned underwear that he has put aside for cleaning rags. I simply do not know where all of these socks have come from - and, more disturbingly, I have no idea where their partners have disappeared to. Clearly, there are three bags full of odd socks whizzing around in an alternate universe, not knowing their matches are here, hidden in my wardrobe. One of these bags even came into the relationship with him: yes, that's right -  I have known his bag of odd socks as long as I have known him. I'm surprised he didn't organise a pageboy on our wedding day to strew the aisle with odd stockings as a sign of our undying love.

And the thing is this: on the rare occasion that we do need an old sock for cleaning purposes - e.g. to rub in furniture wax on our table - he produces one of these ancient rags with a triumphant flourish.
"Aha!" he says. "And YOU told me to throw them away!"
Being a good wife, I bow my head and pretend to stand corrected. If I did throw his socks away, we'd immediately have a sock emergency and he'd never forgive me for this crime, so I've made my peace with the socks.
Mostly.

______________
Whilst in the Narnia wardrobe, I also found a bag with a baby blanket partially sewn together. I had even put the yarn in there, too. Thankfully, I can remember putting it there - I put it aside before I started on some of my big blankets last year, and wasn't really motivated to finish them. But in the spirit of tidying up, I took them out, finished off all the leftover squares and sewed them together 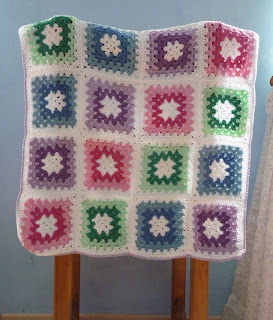 I finished the coloured squares blanket that you saw recently: 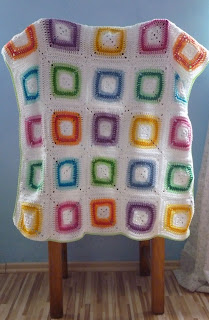 And on Wednesday I'll show you the coloured patchwork squares, with a slightly enlarged border. We'll have a look at it and see how it pleases us then. By the way, Paula asked what I'd planned to do with the brightly coloured yarn in the last post. I have no plans yet, but such a nice rainbow of colours is sure to find a home in a blanket or a cushion or something nice.
Posted by The Gingerbread Lady at 10:14 PM

All the missing partners of your hubby's lonely socks are living in a bag under my stairs. That is the only explanation I have for why there is a huge bag of single socks in there. What a relief, thought I was going mad...

Maybe the missing socks for one of the bags is actually hiding in one of the other bags of lonely socks :)

Earlier this year, a *well-meaning-friend* came over to help me do a pre-baby tidy out. (more of a case of her nesting for me) She came across my black sack of single socks, and after an hour of fruitless matching (or non-matching) she swept the lot back into the bag and into the bin. I was completely devastated. But after several months of therapy I'm starting to come 'round ;)

Ahh yes,I must admit as a wash woman I throw any extras away.(Shame on me) I keep a few but oh my, How many can one keep for rags?

Both lovely blankets but I especially love the second. *Adds to pinterest*

They're lovely! Would you come over to my house, go through things and finish them off too? ;-)