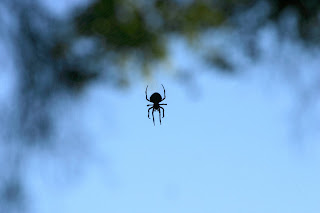 Warning: this post contains graphic tales about spiders with anger issues. If you have a fear of arachnids, I recommend that you choose a post from the Crochet section on the right.
Oh Emm Gee, as the cool kids say.

Yesterday afternoon I was sitting in my parents' sitting room, overdosing on satellite TV (we don't have a television in the Gingerbread House, so I get terribly excited about my parents' 500 channels. I greedily gobble up re-runs of Friends, advertisements for car insurance and reality TV. In fact, I spend hours looking at programmes about other people renovating houses, which is quite sad because I actually flew 1600 kilometres to get away from builder's dust and paint. It just looks so much easier when someone's doing it on the telly.) Anyway, I was sitting in front of the box, transfixed, watching a strident English woman distress a chest of drawers, when I heard a ferocious buzzing from the window sill behind me. I whipped my head around just in time to see an ENORMOUS spider matter-of-factly wrap a big fly in its sticky thread. The fly was buzzing frantically, trying to attract my attention (I think), but I was too scared to intervene. That spider meant business, and I could see by the steely look in its eye(s) that he wasn't open to hostage negotiation. He finished his wrapping and used a hairy leg to push the fly down into the crack between the window sill and the glass pane. Still watching me, he disappeared down into his hidey-hole and left me, shuddering, in front of the TV.
Naturally, I was dying to tell someone about my National Geographic encounter with the Bruce Willis of spiders, but when I excitedly regaled my tale to my family over dinner, they reacted coolly. In fact, they were quite nonplussed. This spider is known as The Brother of the Beast and he periodically emerges to nobble a fly, which he trusses up and carries off to the nether regions of the window frame. My father maintains that there is a second spider that lives under the sofa and this spider comes out at night when my parents are alone in the sitting room: the spider waits till my mother has nodded off, then meanders out to watch my father surf on his laptop. According to my father, The Other Brother of the Beast plonks himself down in the middle of the sitting room floor and calmly watches my father trawl through cyberspace. My father has a creepy feeling that The Other Brother of the Beast is waiting to pounce - perhaps hoping for my father to get distracted by a laughing baby on YouTube so he can jump up and cocoon him in spider silk.
However, the mother of all angry spiders used to reside in my parents' bathroom. This one was called The Beast and - according to family legend - had no compunction about actually launching an attack on people on the loo. Obviously, this spider had figured out that whilst propped on the toilet, in a state of semi-undress, you are fair game for an aggressive arachnid. Apparently my young nephew Liam (a toddler at the time) was actually cornered by The Beast and had to be rescued, sobbing, from the bathroom. Some retellings of this anecdote include claims that The Beast advanced on the child snarling and bearing teeth, but we think this may be a slight exaggeration (and I'm pretty sure spiders don't have teeth). Before my parents could round up a lynch mob, The Beast had scuttled off behind the skirting board and disappeared. He lay low for a couple of weeks before continuing his campaign of cruelty. My brother Robert claims that The Beast then tried to attack him while he was indisposed and he only managed to escape by pelting him with toilet roll. This stunned The Beast for a couple of seconds, during which time Robert slipped off a shoe and used it to defend himself. The Beast might have been big in spideresque terms, but he was no match for a size 12 Adidas.
And thus ended The Beast's Reign of Terror and once again one could go to the loo in the middle of the night, without having to keep a watchful eye on the skirting board, armed with empty toilet roll holders.
Be that as it may, the fact still remains that The Brother of the Beast and The Other Brother of the Beast still live in my parents' sitting room. And since the murder of the fly, I've felt a bit nervous about the sitting room. I find myself glancing over my shoulder, watching my back. A bit creepy, I'm sure.
Posted by The Gingerbread Lady at 6:49 PM

This is my absolute worst nightmare. We too once had a huge spider living in our toilet (but it didn't actually attack): I lived in fear for months. Then we moved (this wasn't why, well not entirely): and it came with us! I unpacked a bag and there it was. It was so big I could see its eyes. I'd suppressed the memory, but you've brought it back. Never mind. I'm sure the shaking will stop soon. Love the blog by the way.

As much as I dislike spiders (Charlotte excluded, of course), I dislike mosquitoes and flies more, much more. So as long as they are not hairy, poisonous, or larger than 1 cm in diameter, I can live with them. As long as they do their duty and nobble (what a wonderful word; I'm stealing it!) said mossies and flies.

And another fantastic photo :)

As a former almost-victim of The Beast, this post gave me the hooly-goolies, but I agree with Patrysia, I'll live with the spiders: but flies, esp. bluebottles are my nemesis... One I try to conquer daily like a loon with a fly swat :-D

Your writing certainly brings back memories, although we never named the critters who graced us with their visits. A size 12 Adidas would have been so handy when we were living out in the sticks when I was a teenager. But my brother was young and his shoes weren't that big yet so I typically had to resort to the vacuum cleaner, except for those times when the spiders were too dang *big* to fit in the vacuum cleaner's hose (wolf spiders can get very big). Then I had to call my mom to handle the situation. Tarantulas I managed to get out of the house with a gentle push of the broom. They were happier to be outside and therefore cooperated with that process. Ah, the memories.