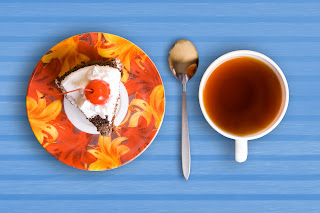 The aunties came to visit last night. My mother is the youngest of nine daughters and now, following the death of one of the sisters a couple of years ago, the eight women make an effort to get together regularly. Few excuses are needed: in this case, my homecoming was enough to draw a flock of perfectly-coiffed ladies to my mother's living room, where they sat around a table groaning with the weight of cakes and biscuits and pots of tea.
If you're not part of a large family, this next sequence might wreck your head. But I thought I should give you a flavour of the evening.
"Did you hear about Mrs Burke?"
"Is that Mrs Burke from Foxhill or Mrs Burke from the bank?"
"She's not still in the bank, is she? She must be ninety if she's a day..."
"Would she be ninety? Really? She went to school with Mammy, lordhavemercyonher ..."
(Me: "What happened to Mrs Burke?")
"Of course she's not in the bank, she'd be 93 now. Anyway, I'm not talking about her, I'm talking about Mary Burke from Grange - small woman, big teeth, a bit of a hunchback. Do you remember her? Ah, you do. A small woman. White hair. A little dog..."
"Was she married to Jim Burke, the brother of Sheila Egan from the post office?"
"That's right, he used to drive the truck for the pea factory."
(Me: "What happened to Mrs Burke?")
"But he's not driving that truck any more, not since he lost his leg in a combine harvester."
"So what's happening at the pea factory now? Have they sold the site?"
"No, they haven't. They were holding off for the best price and then, sure, didn't the economy crash and now no one will touch it with a pole ..."
"Wasn't it built beside the river? Wouldn't that land be boggy?"
"Sure and of course it is. You couldn't pitch a tent there ..."
(Me: "What happened to Mrs Burke?")
"Speaking of boggy land, Eileen and Desmond Hennessey - did you hear about them? Didn't they build a house out by Cloney and isn't it sinking away on them?"
"It isn't! Isn't that shocking! And they spent a packet on that house, didn't they?"
"Sure, Eileen spent a fortune on importing tiles from Italy ..."
"She's an awful eejit, that woman. She used to go to London to buy her outfits, would you believe it. And she wouldn't be slow about telling you that either ..."
"And now the whole house is slowly descending down into the bog ..."
(Me: "What happened to Mrs Burke?")
"Did they not get a surveyor in before they built?"
"Of course they did. But it was Frances Mulhall's son, you know the middle lad? The fella who studied in Galway?"
"The red-haired chap?"
"No, no, the blondy-haired chap with the lisp. Married to that nice Scully girl from out the Geraldine Road ..."
"She used to do the flowers in the nursing home, didn't she? Didn't she have an affair with that gorgeous Italian chap from the chipper's?"
And so on.
Within minutes I'm agog, trying to keep up with the information flow. Well, it's not really a flow, it's more of an information stew. I never find out what happened to Mrs Burke. I don't know what they're going to build on the site of the old pea factory. Eileen and Desmond's house continues to sink, as far as I know. The dodgy surveyor and his flighty wife are briefly touched on and forgotten, and, worst of all, no one will fill me in on the gorgeous Italian and where he can be found.
Posted by The Gingerbread Lady at 11:31 AM

ROFL!!!!!!!!! This is so FUNNY! I'm glad you blogged it for posterity It does sound like my mom and her two sisters when they get together. Being deaf, Its NOT easy for me to keep up with them and I learned a long time ago not to try! Its even more fun when the sisters and their cousins get together at Family reunion in July. Oh! Lala!

Too funny! There were 9 in my Mom's family - her youngest sister died of leukemia when she was 18 and a brother passed a few years ago. But man, can her sisters talk!

Usually when my mom and her sisters get together there is too much laughing to understand what is being said!

Very funny. This is exactly what my mum and her sisters (only 2 though) are like: we once had an evening (involving wine) where they were trying to remember the name of the man with one short leg who used to get on their school bus, and it ended up taking in the lives, loves and social development of practically the whole of north England by the time we had finished.

My mother and her sisters, and me and my sisters, too, when we lived in the same state. As usual, you have your readers rolling on the floor,tears streaming from their eyes, Gingerbread Lady.

By the way, what did happen to Mrs. Burke?

Hello Patrysia,
Mrs Burke died. Actually, it was a bit of an anticlimax after all the gossip and scandal that had preceded it... :-(

I had tears in my eyes from the laughter!